From the pages of African American history, lines of musical heritage intertwined in a concert as appealing as it was fresh and diverse when the Grant Park Festival Orchestra was joined by jazz violinist Regina Carter and the vocal trio TreDiva on July 22 at the Pritzker Pavilion in Millennium Park.

On the podium was Marin Alsop, music director of the Baltimore Symphony Orchestra. But this program was generally less about the classical tradition than the roots of African Americana and its expression in gospel music and jazz. 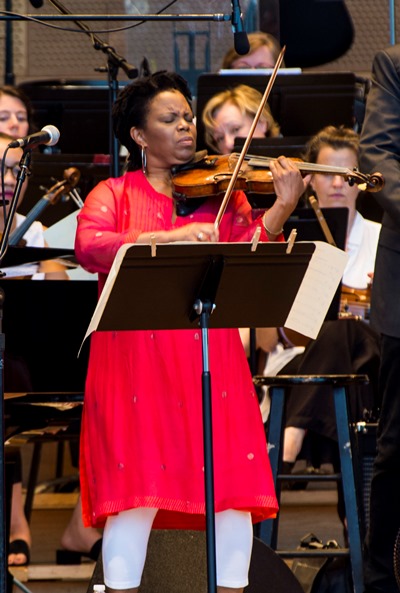 Indeed, two of the evening’s highlights involved the orchestra little and not at all.

In a medley of two episodes from Duke Ellington’s “Black, Brown and Beige” suite – “Slave Song” and “Come Sunday” – the Detroit-born violinist summoned from her instrument a wistful vocalism that bordered on verbal. Here was playing of unfailing finesse, heart and depth, all delivered with absolute technical assurance.

The musicians behind Carter were a pleasure as well, and each had a telling turn in the spotlight: Davis, a suave jazz master whose fluent authority at the keyboard mirrored the fetching qualities in Carter’s violin sound; Lightcap, an agile bassist with a flair for supercharged improv; and Garnett, whose complex, powerful snare riffs brought to mind the likes of Joe Morello and Art Blakey.

Progressing through such classic spirituals as “Deep River,” “Ride On, King Jesus” and “There Is a Balm in Gilead,” the sequence rounded on both ends by “He’s Got the Whole World in His Hands,” the singers tapped into the joyful and devout essences of these songs in arrangements at once brilliant and challenging. But they also had one more to add. 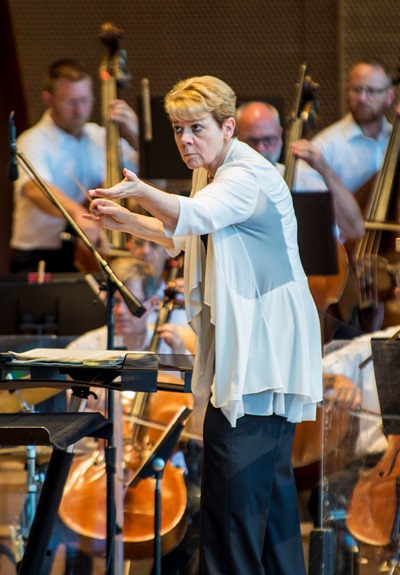 Before conducting the Grant Park Orchestra in Dvořák’s Symphony No. 9 in E minor (“From the New World”), Alsop announced that the three sopranos would return just before the second movement, with its famous “Goin’ Home” theme, to sing that hymn. Which they did, to lovely effect, as the tune comes up – in this instance, like an echo — almost immediately in Dvořák’s slow movement as a languid solo for English horn.

Alsop also took a moment to sort out the relationship between the tune and the spiritual, noting that Dvořák did not borrow the melody but actually was its author. It was the composer’s pupil, William Arms Fisher, who wrote words to the air and thus gave us the spiritual.

The “New World” Symphony once more attested to the solid quality of the Grant Park Orchestra. Ultra-familiar as the music may be, this was no mere read-through, but a thoughtful exploration on Alsop’s part that the orchestra brought off with attentive, expressively nuanced playing.

All that given, it also must be said that the Grant Park ensemble proved to be a good deal more comfortable with the familiar intricacies of Dvořák’s music than with the comparative directness but jazz-based essence of James P. Johnson’s “Harlem” Symphony, which opened the concert. If Alsop gets the peculiar inflections that give life to Johnson’s score, a sort of urban suite in four movements, she had not conveyed the secrets of its language to the band. Groove, pulse, swing:This attempt scarcely hinted at those ingredients.

Happily, as brief concert closer, Johnson’s raucous, brash and brassy “Victory Stride” got the band going to send the huge crowd home with a bounce.