Slow start to a musical adventure is challenge at Grant Park concert, then the good times roll 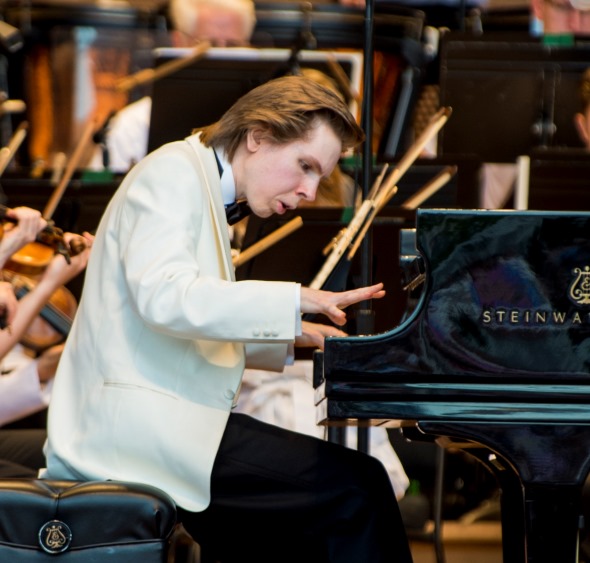 The Grant Park Music Festival likes to break from the routine in programming and presentation. Sometimes it does so in dramatic ways, and sometimes the departures are more subtle, as they were during a concert June 29 in Millennium Park’s sprawling Pritzker Pavilion.

Traditional concert line-ups, for example, typically start with a short, perky opener, move to a concerto and end with a symphony or other large-scale work. But for this performance, music director Carlos Kalmar chose to turn that order on its head, and the results were a little mixed. 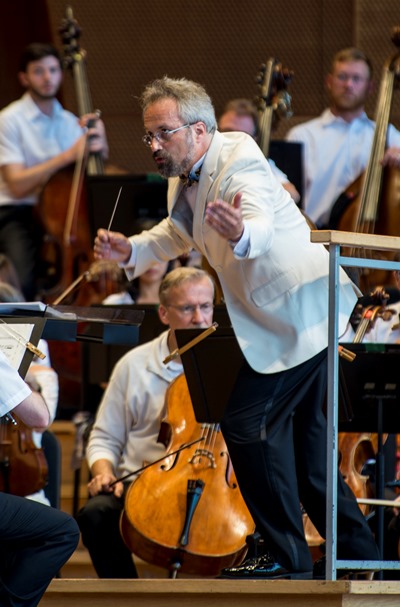 Kalmar began the evening with a major symphonic work by Nikolai Rimsky-Korsakov. But instead of one of three oft-heard compositions by the popular 19th-century Russian composer, the conductor took a more adventuresome turn. He opted for an early programmatic works “Antar,” Symphonic Suite, which was a kind of prototype of Rimsky-Korsakov’s later classic, “Scheherazade.”

Although “Antar” offers Orientalist exoticism and alluring melodies, including some that the composer borrowed from a French collection of Arabian music from Algiers, its sparser textures and amorphous, elusive structure do not give it the same immediate appeal as “Scheherazade.” The performance was solid enough, with notable clarinet and harp solos, but that did little to sell “Antar” as anything more than an interesting curiosity to dust off every few decades.

It also didn’t help that the work’s soft, lumbering beginning made it difficult to settle into the music and into the concert as whole, especially with the birds, helicopters and other ambient noise that are unavoidable in the concert’s urban outdoor setting. While Kalmar deserves praise for trying something different with his program order, it is hard not to wonder if “Antar” might have worked better later in the concert.

For the evening’s centerpiece, Kalmar and the orchestra returned to the tried and true – Chopin’s Piano Concerto No. 2 in F minor. As soloist, the festival turned to up-and-coming Finnish pianist Juho Pohjonen who is 35 but looks much younger. It was an inspired choice. 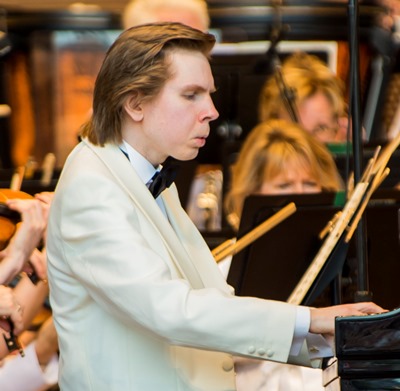 Finland is best known for producing a stream of prominent conductors like Susanna Mälkki, Esa-Pekka Salonen and Osmo Vänskä, but apparently the keyboard training is not too shabby either in that musically rich country. Pohjonen,who made his Chicago debut in 2012 at the Harris Theatre, has taken prizes in several international competitions, and he was a member in 2009-12 of Chamber Music Society Two, the Chamber Music Society of Lincoln Center’s prestigious program for promising emerging artists.

As with virtually all of today’s young pianists, technique was never an issue for Pohjonen. Of more importance were his innate musicality and his ease and affinity with the Gallic élan and romantic spirit of Chopin’s music. He constantly adjusted his keyboard touch and drew an impressive range of nuanced tonal variety from the piano, infusing his phrasing with a refined, poetic sensibility.

Pohjonen delivered due muscularity and punch when called for, but more memorable were the deftly shaped moments of dreaminess and delicacy and the subtle seductiveness he brought to the slow second movement. Supported with nicely complementary backing from Kalmar and the orchestra, this was a fresh, captivating performance that whetted the appetite to hear more from Pohjonen.

The only mark against this performance was the out-of-balance amplification (at least in the front part of the amphitheater near the stage), which as many recordings do, put too intense an acoustical spotlight on the soloist. The pianist often sounded a bit separated from the orchestra rather than integrated with it, and it was sometimes difficult to hear much of the orchestra behind him as he played.

Kalmar concluded the concert with “Thunderstuck,” a nine-minute work by Christopher Rouse that was originally intended as a concert opener, turning it into a kind of an encore – an approach that worked well enough. The New York Philharmonic debuted “Thunderstuck”  in October 2014, during Rouse’s  three-year tenure as the orchestra’s composer-in-residence.

Rouse, 67, does not have the name recognition of, say, Philip Glass or John Adams, but by any measure he is one of this country’s most important living composers. He typically stays within the tonal realm and is known for writing works that pack a punch and are infused with often emphatic contrasts in mood and volume. “To me,” Rouse said a few years ago in a Chicago Sun-Times interview, “the worst thing is boring the listener, to write something that’s just kind of namby-pamby – correct but has no oomph to it all, no intensity, no expressive commitment. That doesn’t interest me.”

He needn’t worry when it comes to “Thunderstuck,” which is anything but boring. It is an easy-to-like work with catchy melodies and surprising sweep given its compact duration. In his accompanying program notes, Rouse wrote that none of his works are more touched by rock music than this one, which makes a direct allusion to Jay Ferguson’s 1978 hit, “Thunder Island.”

The rock influences can be heard especially in the work’s syncopated, rhythmic drive, which is powered by an array of percussion (another Rouse hallmark), including a trap set – a rock staple.  “The work is meant to be engaging and fun – sometimes I feel that a little more ‘fun’ at classical music concerts would be all to the good,” the composer wrote. It’s hard to disagree.