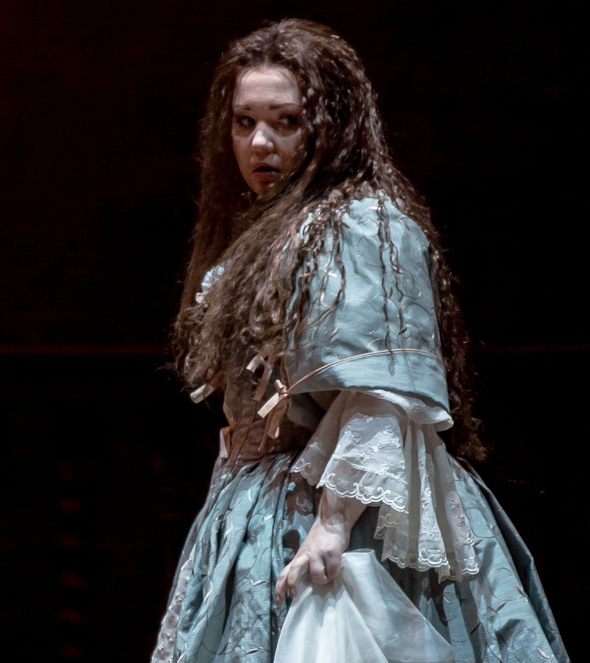 Review: “I puritani” by Vincenzo Bellini, at the Lyric Opera of Chicago through Feb. 28. ★★★

No one doubted that Russian soprano Albina Shagimuratova would be back at the Lyric Opera of Chicago after doing such a superb job of going mad the first time around. In 2016 she portrayed the innocent Scottish lass Lucia, of Lammermoor, forced into an arranged marriage despite her betrothal to someone else. She emerged from the wedding chamber armed with psychotic coloratura, compliments of Donizetti, and a knife dripping in blood. 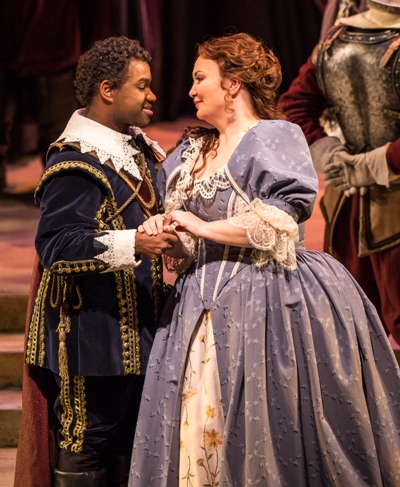 Now Shagimuratova (Shagimur-AH-tova) plays the Puritan maiden Elvira, who is mentally shattered by her fiancé’s abrupt departure on her wedding day. Arturo is actually a good man with an urgent reason for leaving; he must assist the immediate escape of his queen, who is in hiding on the wrong side of history, in a civil war between Puritan protestants and Catholics loyal to the crown. The queen’s royal husband has been slain; her situation’s perilous. Cue the coloratura, this time from the pen of Bellini.

The 1835 opera “I puritani” (The Puritans) starts out as a Romeo and Juliet upper: Elvira’s family actually agrees that the Puritan girl can marry her Catholic true love! But when her fiancé’s disappearance goes unexplained, Elvira utterly wigs out, and we’re right back to the sort of fraught situation that leads to histrionics above high C.

Too bad Arturo didn’t pause to tell Elvira that he’d be right back, give or take a month or two … and why. But then Bellini wouldn’t have had his opera. And Shagimuratova wouldn’t be making her role debut in another bel canto melodrama that  fits her like a glove.

The role of “I puritani’s” Elvira resides in the legendary domain of Callas, of Sutherland, of Sills; one tolerates a weak plot because of the opportunities for stunning virtuosic vocal feats and the extraordinary beauty of the music. The fiancé, Arturo, must also have an unusual aptitude for notes above tenorial high C. Such voices are rare indeed; Lawrence Brownlee climbs to a stratospheric F in his outstanding turn as the hero egregiously misunderstood.

The impressive Shagimuratova sounded much the same as she did in 2016, her technical poise still formidable, her voice a little weightier and more dramatic in the center perhaps. It was wonderful to hear the same buoyant, crisp conducting that supported her in “Lucia di Lammermoor” two years ago, from the attentively impeccable Italian Enrique Mazzola. Equally rewarding to find, as Giorgio, the warm Romanian bass Adrian Sâmpetrean, playing once again the part of the heroine’s caring and sympathetic supporter. (His brothers-in-arms duet “Suoni la tromba” [Sound the trumpet] with baritone Anthony Clark Evans was a highlight of the second act.) 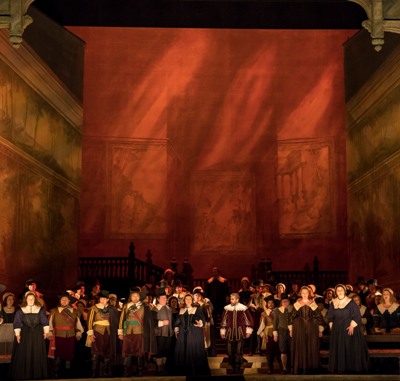 The “Lucia” of 2016 was staged as a bel canto acid trip with shockingly nightmarish visuals. Although the production was already 20 years old at the time, it was revived by its original director, Graham Vick, and felt quite fresh. This “I puritani” staging is even older, designed by Ming Cho Lee for the Metropolitan Opera in 1976, and it is still classically pleasurable to look at, with an elegant staircase and enormous, faded chiaroscuro paintings on the walls that connote the legendary pull of ancestry.

Sandro Sequi’s 1976 directorial concept for “I puritani” was no longer any restraining force for the Lyric Opera in 2018; the sets were freely put to other creative purposes by the 37-year-old American director Eric Einhorn, who had the excellent idea of side ramps that allowed soldiers to chase their desperate fugitives right into the audience. Opera is theater – lyric theater, but theater nonetheless – and Chicagoans like their verisimilitude. It was not surprising that the chorus, which sounded wonderful, was subjected to some unfortunate “move ’em in, move’em out” herding; Einhorn did no worse than most directors faced with urgent traffic flow demands in narrow lanes. Also not for the first time at the Lyric, the fight scenes weren’t that great; too many swords wielded like hors d’oeuvres forks in unsure hands.

But the casting did present one visual puzzle, the solving of which falls squarely in the director’s lap: Emerging Wagnerian contralto Lauren Decker, a Ryan Center member, took the role of the fleeing queen, with Brownlee’s Arturo as her protector. She happens to be taller than usual in stature and he, like many higher-than-high tenors, is of somewhat less than average height. The unnecessarily distracting optics didn’t work from the audience angle and the staging could have – should have – been managed differently, the better to enjoy such sumptuous singing. 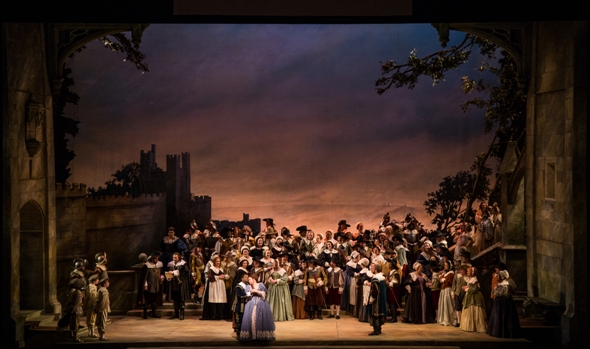