Lyric Opera hit ‘Orphée,’ with Joffrey Ballet, will be aired on ‘Great Performances’ in 2018 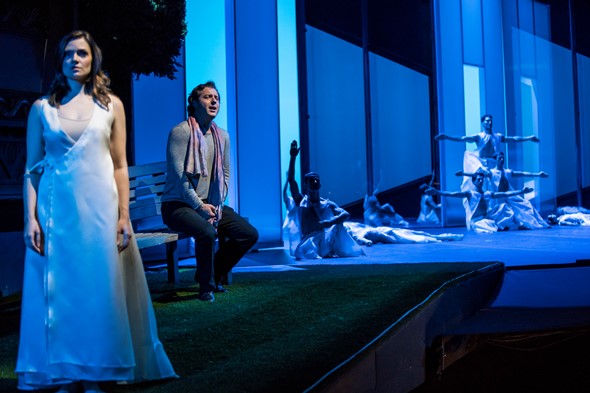 Lyric Opera of Chicago is pleased to announce that Thirteen Productions LLC for WNET New York has selected the world-renowned opera company’s premiere production of the 1774 Paris version of Gluck’s Orphée et Eurydice, created by the legendary choreographer John Neumeier and featuring The Joffrey Ballet, to be part of the prestigious Great Performances series on PBS.

The WNET team will be in Chicago to film performances October 6 and 9 at the Lyric Opera House, home of Lyric Opera of Chicago. PBS’s Great Performances broadcast of Orphée et Eurydice is slated to air later in 2018​.

Audiences for the Oct. 6 and Oct. 9 performances will have the opportunity not only to see the haunting new production that has been highly acclaimed by the opening-night audience and critics alike, but will be part of the broadcast that will be shared nationwide. Tickets available at 312-827-5600 or www.lyricopera.org/Orphee.

Now in its 45th season, PBS’s Great Performances has an extensive history of capturing noteworthy live performances for national broadcast. Matthew Diamond, who directed NBC’s televised live production of The Wiz, and Lyric’s world-premiere of Bel Canto – the Opera for broadcast on Great Performances in January 2017, will direct the television presentation of Orphée et Eurydice, collaborating with the award-winning production team from WNET and Great Performances executive producer David Horn.

“With a history of Lyric Opera of Chicago co-productions dating back to 1980,” says Horn, “we are delighted to again partner with Lyric to bring this innovative interpretation of an early classical opera to a national audience, as well as welcome back the Joffrey Ballet to the primetime spotlight on Great Performances.”

One of the most influential works in the history of opera, Orfeo ed Euridice (1762) – last seen at Lyric in 2005-06 in its original Italian version – was revised significantly by composer Christoph Willibald Gluck for the Paris Opera in 1774. This version, Orphée et Eurydice, altered the role of Orpheus from alto castrato to high tenor, and added a significant amount of ballet music to the score (including two celebrated scenes, the “Dance of the Furies” and the “Dance of the Blessed Spirits”).

Familiar from Greek myths, the plot centers on the poet-musician Orphée (Dmitry Korchak/Lyric debut), whose singing was so beautiful that it could charm the fierce guardians of the Underworld. Encouraged by the god of love, Amour (Lauren Snouffer), Orphée travels to Hades to bring his dead wife, Eurydice (Andriana Chuchman), back to earth.

Dance is central to the storytelling in this new production: Orphée is a modern-day choreographer, his Eurydice a prima ballerina, and Amour is the choreographer’s assistant. Dancers fill the stage throughout this version of the opera.

Integral to the new production is the participation of The Joffrey Ballet in the highly acclaimed company’s first performances with Lyric. The opera is sung in French, with English translations above the stage for the live audience and onscreen for the broadcast audience.

The renowned English conductor Harry Bicket conducts the new Lyric production, which is directed and choreographed by John Neumeier, who also has designed the sets, costumes, and lighting (Lyric debut in these capacities; he danced in The Harvest, a Lyric world-premiere opera, in 1961). Heinrich Tröger (Lyric debut) is associate set designer, lighting realization is by Chris Maravich, Michael Black is chorus master, and August Tye is Lyric’s ballet mistress.

“All of us at Lyric are delighted to share the excitement of this important new production of Orphée et Eurydice with the Great Performances audience,” says Lyric’s general director Anthony Freud. “It is a breathtakingly beautiful piece of music theater newly imagined by John Neumeier, the extraordinary choreographer who began his dance career in Chicago, then moved to Germany, where he has been artistic director of the Hamburg Ballet for over four decades. The cast stars three outstanding international artists plus the exceptional dancers of The Joffrey Ballet, with conductor Harry Bicket, who is legendary in this repertoire, leading the Lyric Opera Orchestra and Chorus. Thanks to Great Performances, this brilliant new production will be seen and heard by many more people than can attend the live performances here at Lyric.”