‘Firebird,’ transfigured as ballet with puppets, made image of rebirth in S. African production 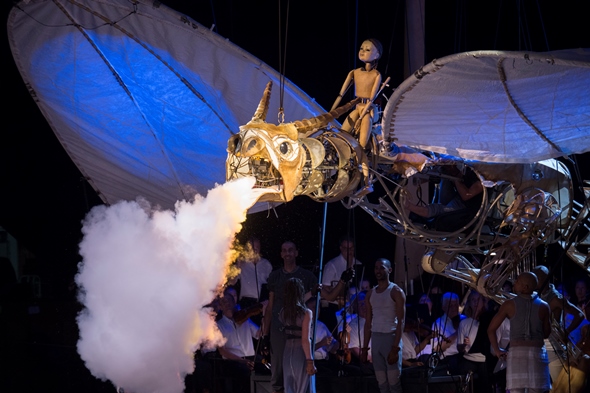 The original story behind Stravinsky’s ballet music for “The Firebird” is one of transcendence, even resurrection: evil vanquished and good souls restored to life. So it isn’t such a great stretch to the re-imagined ballet, as a danced parable with puppets, presented by Janni Younge Productions at the Ravinia Festival.

Though still titled “The Firebird,” this adapted version combines kinetic choreography with grand-scaled puppets – created by Handspring Puppet Company, which also made the famous puppets used in the drama “War Horse” – to tell twin tales of personal self-discovery and South Africa’s continuing struggle for social reclamation two decades after the end of apartheid. 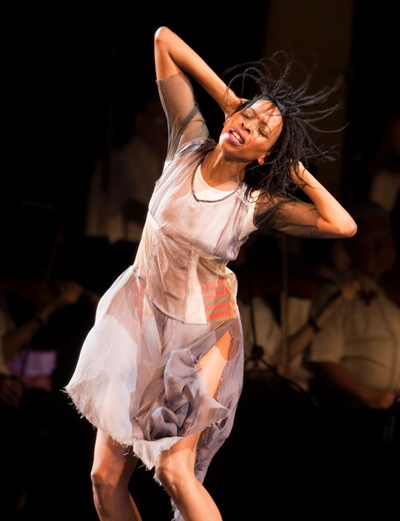 This new-day “Firebird,” which began a U.S. tour in Philadelphia on July 20, co-starred an excellent troupe of dancers and huge, eye-popping figures representing, one might say, the bird of aspiration, the beast of obstruction and the creature that is renewal and hope – not just newborn and unfettered, but also invincible.

What unfolds on the stage is quite literally animated by a proposition of psychological duality that applies to both individuals and societies: Growth implies the destruction of opposites, and the emergence in their place of a new authenticity, newly energized. Thus we watch as the bird and the beast destroy each other and in their place – perhaps not unlike the Phoenix rising – emerges a massive winged dragon, upon whose back the struggling One (and implicitly a society in tumult) is ready to take flight, its identity and purpose restored.

Younge, in her program notes, quotes the psychoanalyst Carl Gustav Jung: “The greatest and most important problems of life…can never be solved, but only outgrown…in a new level of consciousness.” 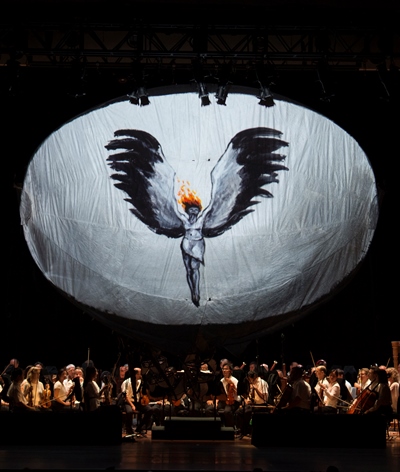 Remarkably enough, what may sound like a frightfully abstruse theatrical conception plays out with compelling clarity, even directness – owing to a polished combination of Younge’s focus storyline and direction, Jay Pather’s high-powered choreography, superb dancing and the enchantment of those larger-than-life puppets.

The paired dramas of redemption, personal and societal, played on on two different plains. While solo dancer Jackie Manyaapelo embodied the single soul in its quest for authenticity, animated images within an large egg-shaped form overhead depicted the hard, turbulent life in what one took to be a typical South African township.

In the end, the individual and society coalesced into a single entity as that large egg “hatched,” transforming into a tremendous winged dragon mounted by a wooden avatar for Manyaapelo’s long-suffering character.

And suffer her character did in acrobatic choreography that saw the girl tossed about by misfortune and frustration. Winged dancers seemed to embrace her at one moment only to defy her at the next. Reality being uncertain as it is, the plausible question occurs: Is this a metaphorical dream? And does the solo dancer, herself society’s avatar, awakens to a new clarity, with Jung’s “new level of consciousness”? 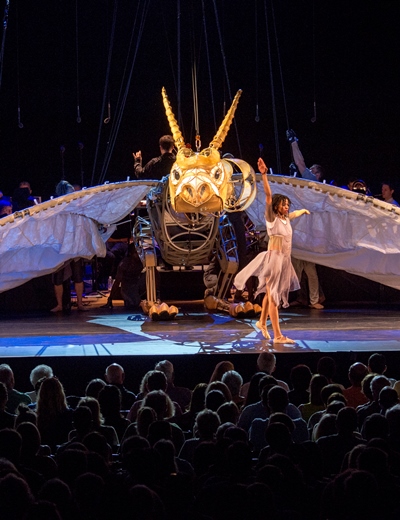 As for Stravinsky’s music, which was embroidered with unfamiliar additions here and there, it was both physically and effectively pushed into the background, as the Chicago Symphony was moved upstage and sounded like it was playing under a semi-permeable canopy. This was not “The Firebird” one would expect from the CSO front and center.

The ballet occupied the program’s second half. The first part also suffered sonically – at least inside the pavilion — from the orchestra’s recessed position and the visual and acoustical obstruction of that giant egg, already in place, which left only the conductor’s legs visible and essentially nothing of the middle of the orchestra. The first half’s musical fare, thus experienced at an emotional distance, was Debussy’s “La mer” and Britten’s Four Sea Interludes from his opera “Peter Grimes.” 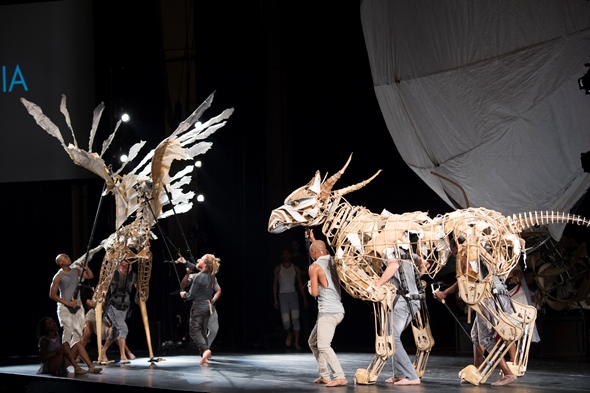