‘Constellations’ at Steppenwolf: Of relativity, and the infinite outcomes of boy meets girl 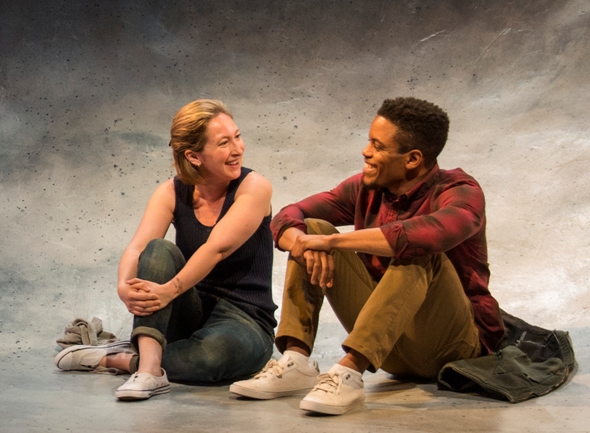 Review: “Constellations” by Nick Payne, at Steppenwolf Theatre through July 3. ★★★★

Life isn’t like a box of chocolates. It’s more like a roll of the dice, suggests playwright Nick Payne in his touching romance “Constellations,” now on crisp and credible view at Steppenwolf Theatre. But Payne’s ethereal proposition really goes further: Imagine what it might look like, from somewhere on the space-time continuum, if you could watch the same situation — say, the relationship between a man and a woman — play out from the get-go over and over, like infinite tosses of those fateful little cubes. 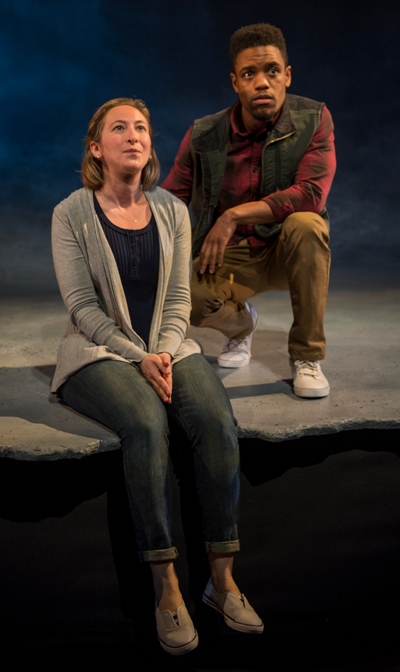 Marianne (Jessie Fisher), a young theoretical physicist, and Roland (Jon Michael Hill), a beekeeper, meet a party. They go back to her place. And there begins a relationship that shape-shifts nonstop, leaping forward and back across time until we (and they) arrive at what feels like the “real” (and tragic) outcome — only to bounce back to a happy moment when infinite eventualities seem once gain possible.

I began by likening the rapid-fire events and ever shifting causes-and-effects of “Constellations” to, well, a crap game. But as the physicist Marianne points out to Roland, in a hour of profound crisis, the whole scenario (meaning life itself) is really about relativity. The idea of time is a construct of our imaginations. There is never more or less time; we only perceive time as something actual, subdivisible, passing, diminishing or, indeed, even increasing. Similarly, we assume that our lives and the forces that act upon them are unique: singular phenomena of the only universe we know.

But what if, at least in a manner of speaking, the circumstances, the causal factors, of our lives could be envisioned in infinite variation? Roland goes home with Marianne, who just inside the door has a change of heart (a freighted phrase). Roland goes home with Marianne and 1) she’s just coming out of another relationship and isn’t ready for this charged situation, 2) sparks fly and he stays over, 3) she says, OK, here’s the deal: I’m going to bed — you sleep on the couch. And on out to infinity. Each of those results alters the shared history of two people. 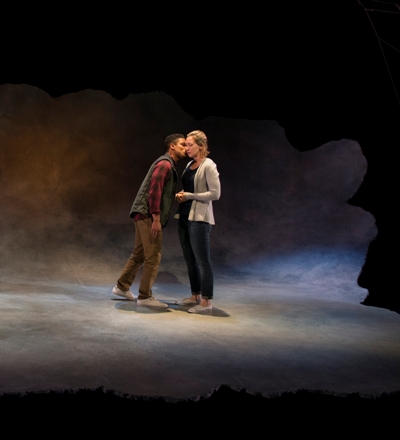 Against a starkly cosmic backdrop — Joe Schermoly’s set also could be a beach, bringing to mind the not unrelated proposition of Edward Albee’s “Seascape” — Fisher and Hill flash adroitly through circumstantial variations as we watch Marianne and Roland meld their fortunes one moment, dissolve their relationship the next, confess infidelities, pledge their mutual trust and ultimately confront the twin crises of death and loss.

As the story weaves the threads of time (here under the incisive and fluent direction of Jonathan Berry), Payne peppers his narrative with hints of a grim eventuality emerging in the background. But meanwhile, there’s also life’s comedy, in the funny sense: Fisher’s casually brilliant Marianne explains the gist of theoretical physics to Hill’s adoring but utterly uncomprehending beekeeper. He, determined to bridge that gulf, proudly informs her that he has actually read one of her theoretical essays; no less eagerly, she lets him know she purchased some of his honey at a supermarket. These moments, the revelations and awkwardnesses and anxieties, materialize and vanish like the turning pages of a random, undated diary. 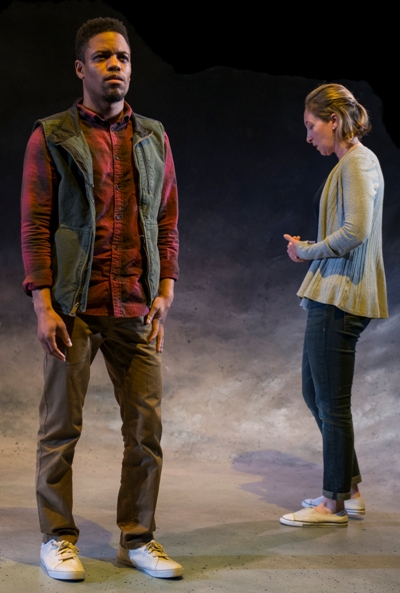 And then one reality seems to precipitate from the cosmos of possibilities. it is the ugly specter of brain cancer, and looming death. Now we watch two very convincing actors rise above dispassionate relativity to the immediacy of human need, mutual dependence, compassion. When the affliction affects speech, the two lovers turn to sign language in an animated, protracted scene that I could only observe with fascination albeit with no comprehension at all.

The victim is resigned and ready to make a painless exit. The companion does the human thing and implores forbearance: Surely this action could be deferred for two life-savoring months; then, surely for two weeks. Whereupon comes the key speech of the play, a testament of authentic understanding when infinite possibilities have come down to one plain truth: Time is unmarked; it has neither beginning nor end. The time we have now is neither more nor less than we ever had.

Has the play’s first principle, of limitless realities in infinite universes, been set aside then? Not at all. Death, be not proud, indeed. The page turns…