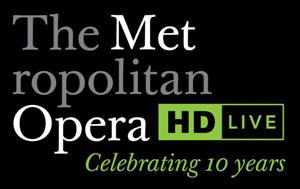 THE METROPOLITAN OPERA’S 2016-17 SEASON, ITS 50TH ANNIVERSARY AT LINCOLN CENTER, WILL FEATURE 10 HD BROADCASTS IN CINEMAS AROUND THE WORLD INCLUDING CHICAGO AREA LOCATIONS.

The Met: Live in HD series, which transmits Met performances to more than 2,000 movie theaters in 70 countries around the world, continues for its 11th season. Ten performances from the season will be broadcast, beginning October 8 with the 100th transmission in series history, the new production of Tristan und Isolde.

The 2016-17 season of The Met: Live in HD will kick off October 8 with the 100th presentation in series history, Tristan und Isolde.

The Met’s groundbreaking series launched in 2006 and quickly established the company as the world’s leading alternative cinema content provider. More than 19 million tickets have been sold since the series’ inception, and the series currently reaches more than 2,000 movie theaters in 70 countries around the world.

Tickets for the 10 transmissions in the 2016-17 Live in HD season will go on sale July 20, 2016 in the U.S. and Canada, with Met Members offered priority before tickets are made available to the general public. International ticket sales dates and details on ordering tickets for the 2016-17 Live in HD series vary from country to country and will be announced separately by individual distributors.

Within months of their initial live transmissions, the Live in HD programs are shown on PBS. The PBS series, Great Performances at the Met, is produced in association with PBS and WNET, with support from Toll Brothers, America’s luxury home builder®. Additional funding is provided by the National Endowment for the Arts.

The Met on the Radio and the Web

The Met’s 86th consecutive Saturday Matinee Radio Broadcast season kicks off on December 3 with a live broadcast of Manon Lescaut and continues through the May 13 matinee of Der Rosenkavalier. The broadcast season will once again be heard live over the Toll Brothers-Metropolitan Opera International Radio Network. Mary Jo Heath returns for her second season as host and Ira Siff returns for his tenth season as commentator for the broadcasts, which feature a range of dynamic intermission features, live backstage interviews with artists, and the ever-popular Opera Quiz. The 2016-17 Metropolitan Opera Saturday matinee radio broadcast season will be sponsored by Toll Brothers, America’s luxury homebuilder®, with generous long-term support from The Annenberg Foundation, The Neubauer Family Foundation,  and the Vincent A. Stabile Endowment for Broadcast Media, and through contributions from listeners worldwide.

Metropolitan Opera Radio on SiriusXM Channel 74 will present its 11th season as the country’s premier subscription radio channel dedicated to opera. Up to three live performances will be broadcast each week during the season, hosted by Mary Jo Heath with commentator William Berger, as well as historic broadcasts from the Met’s vast collection. The channel also features lively interviews and previews of upcoming Met performances. The live broadcast season begins with the Met’s Opening Night performance of Tristan und Isolde on September 26. Metropolitan Opera Radio on SiriusXM is available to subscribers in the United States and Canada.

The Met will continue to stream one live performance per week during the 2016-17 season on its website at metopera.org.

The Met will continue to release performances from its vast archive of current and historic performances on CD, DVD, Blu-Ray, and digital platforms in the 2016-17 season, with the trademark artistic and production quality that has earned the company three consecutive Grammy Awards for Best Opera Recording.

More than 60 titles are currently available for purchase through the iTunes store, including Live in HD and standard definition video performances, audio performances, and ringtones.

The Met’s exclusive streaming service now features more than 575 full-length Met performances, available worldwide through a growing number of platforms that now includes computers; Roku devices; Samsung Smart TVs; Apple TV via Airplay; iPad; and Android devices. The Met Opera on Demand library includes more than 90 presentations from the Live in HD series, as well as hundreds of other telecasts and radio broadcasts dating back to 1935.

Met Opera on Demand: Student Access allows university and college libraries to make this digital resource from the Met accessible to their student populations. This service will continue to expand in the coming season. Student Access, which offers exclusive educational resources to students and faculty along with access to the library of Met Opera on Demand performances, is already used by more than 100 schools around the world.