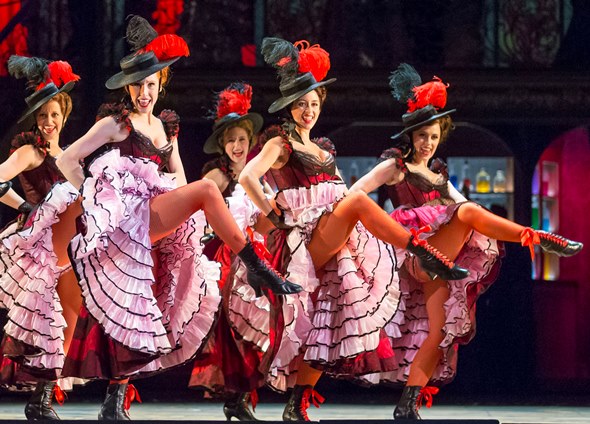 Review: “The Merry Widow” by Franz Lehár, libretto by Viktor Léon and Leo Stein, sung in English at Lyric Opera of Chicago. ★★★

If it had been opening night for the Lyric Opera production of Franz Lehár’s “The Merry Widow,” one might have understood the stark contrast between the dismal walk-through of the first act and the sustained vivacity suddenly on display post-intermission. One might have chalked it up to a calming of collective nerves. That sort of thing does happen.

But as this was the second performance, the first-night excuse hardly applies. I daresay the show is what it seemed to be: egregiously uneven. Whereas Act I of this enterprise starring soprano Renée Fleming — and directed and choreographed by Susan Stroman in her Lyric debut — never takes flight, the continuous flow of Acts II and III is continuous fun: an energetic, bubbly comedy filled with eye-popping charm and terrific singing. 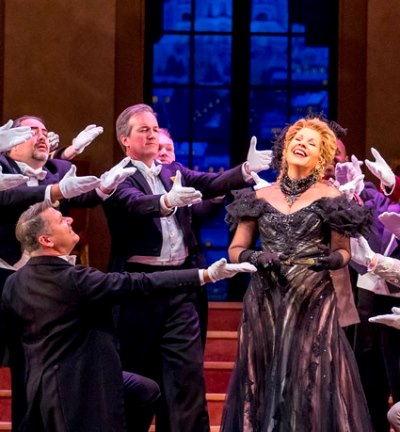 In Lehar’s echt-Viennese operetta of 1905, the ambassador to France from the tiny, cash-strapped country of Pontevedro gives a ball in Paris to raise funds. He’s especially concerned about retaining the great wealth of his recently widowed countrywoman, Hanna Glawari. To that end, he presses the Pontevedrian playboy Count Danilo Danilovich (baritone Thomas Hampson) to give up his wayward life and marry the lady. Amid scandalous byplay and a rousing romp at the notorious nightspot Maxim’s, Danilo’s resistance slowly crumbles and he confesses that he has always loved Hanna.

(Ah, should I have prefaced that last bit with a spoiler alert? Too late.) 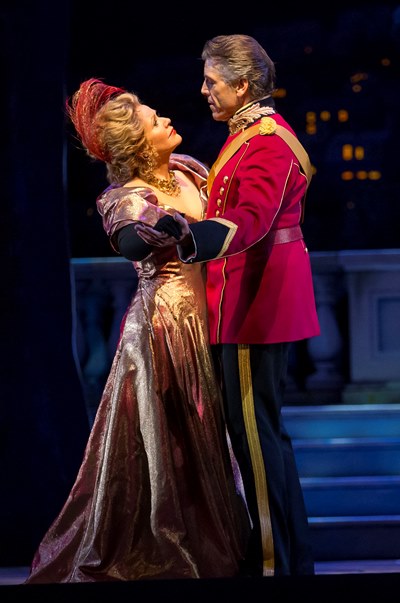 But it’s also at the Garden party that the comedy ratchets up as the Pontevedrian ambassador (baritone Patrick Carfizzi) and his dallying wife (soprano Heidi Strober) circle around the delicate implication (and uncertain ownership) of her fan – which has been indelicately inscribed by her overly eager lover (tenor Michael Spyres). Near discoveries and quick cover-ups, all adorned by Lehár’s tuneful score, bring this operetta to the level of Johann Strauss Jr.’s “Die Fledermaus.”

Hampson offers exactly the dashing, debauched Danilo needed to keep the operetta moving forward. Danilo’s signature aria, “You’ll Find Me at Maxim’s,” may be the stuff of vaudeville – and Lehár didn’t hesitate to milk it in reprises – but it’s a great guilty pleasure and Hampson delivers it with the full measure of self-indulgent decadence.

Timing is all in successful comedy, and Stroman’s ensemble had it down precisely in the last two acts. The fun-o-meter topped out in the riotous doings that bring the show to its close at Maxim’s. Stroman’s choreographic mastery told in rambunctious, high-kicking numbers by the club’s chorus line of famously naughty grisettes.

As in “Die Fledermaus,” froth is very much the substance of “The Merry Widow,” and for two-thirds of the Lyric’s production, Stroman and conductor Andrew Davis keep the bubbles streaming. And that’s surely the happy impression that listeners carried with them into the night after the performance I saw. Yet buoyancy here came only after a remarkably dispirited slug through the first act. 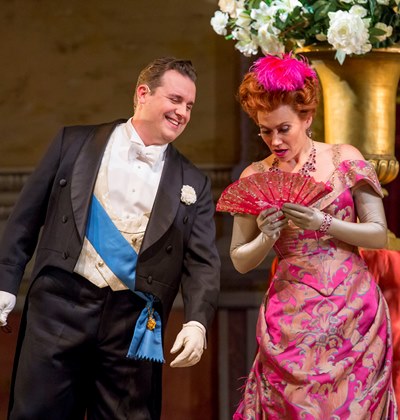 Strober and Carfizzi, who eventually became a highly amusing pair as wayward wife and oblivious husband, struck no more sparks in the early going than did anyone else amid a pervasive absence of comic edge and authentic joie de vivre. Entrances and exits were clunky, dialogue more recited than engaged. And though Michael Spyres’ silvery sound made an instantly dazzling impression, Fleming projected so marginally that one might have taken this for a dress rehearsal. By the end of Act I, it was looking to be a very long evening. And then, click, all the gears fell into sync.

The show looks great throughout, a splendorous combination of Julian Crouch’s posh sets and William Ivey Long’s gorgeous costumes – which top out with the grisettes’ brilliant, frilly can-can skirts at Maxim’s.

Note: Fleming will sing title role only through Dec. 3; Nicole Cabell takes over for the last three performances Dec. 9-13.