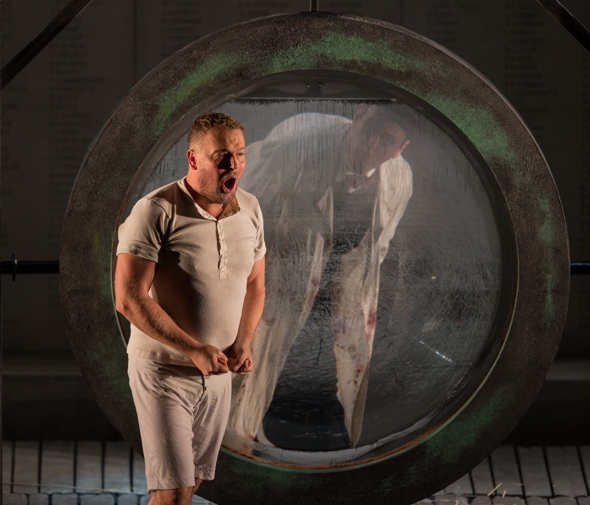 Review: “Wozzeck” by Alban Berg, in the world premiere of a production by David McVicar, conducted by Andrew Davis, at the Lyric Opera of Chicago through Nov. 21. ★★★★

Lyric Opera’s soaring new production of “Wozzeck” is set amid the rubble of the First World War’s aftermath, corresponding exactly to the years when Vienna-born composer Alban Berg penned its words and music. Berg began working on “Wozzeck” in 1914 after seeing a production of the unfinished 19th-century stage play called “Woyzeck,” by Georg Büchner. It drew the portrait of a low-ranking working class soldier, dehumanized by the brutality of military life, who commits murder in a jealous rage. 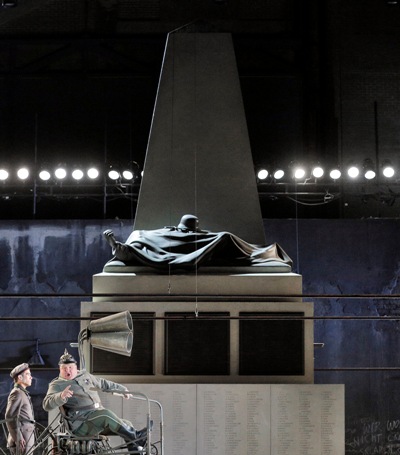 From 1915-1918, Berg was a soldier himself, an experience that only increased his belief in the opera project and his determination to set Büchner’s fragmentary play to music. He resonated to “Woyzeck’s” expressionistic starkness, which seemed to fit the spirit of his modern times. Berg considered its realism to be haunting, and he set about selecting fifteen short scenes to tell the tale. His resulting opera, “Wozzeck,” completed in 1922, was first performed in Berlin in 1925.

As envisioned by director David McVicar, set designer Vicki Mortimer and lighting designer Paule Constable, the era depicted by their new production is Berg’s own horrible post-World War I decade, and the effect of the whole is as deeply unsettling visually as it is musically rich. The world of this “Wozzeck,” which we see through the hapless soldier’s eyes, is the color of ash. Its grimy walls are little more than flimsy curtains. Its wheels are turned by human gerbils. Bullying is a casual sport. What passes for beauty is dime-store cheap lies. A fist rises in anger from the unfinished monument to the dead in eerie, avenging prophesy.

Yet against this uneasy, bleak, Brechtian palette, “Wozzeck” is overwhelmingly plush with the impact of Berg’s music. The Lyric Opera Orchestra under music director Andrew Davis is unabashedly and romantically indulgent, luxuriating in long lines that lend expression to Wozzeck’s intensely personal predicament. The soldier is trapped in servitude and slipping into madness. Berg’s musical account of Wozzeck’s grotesque travails has a way of suddenly panning wide, as if to embrace us all in our human dissonance and complexity. 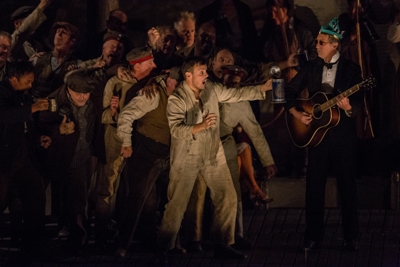 It is a breathtaking score, savagely parodistic, yet aching with epic sadness. One had the sense that McVicar and Davis saw the opera as one. There were scenes, such as in the tavern, and in the doctor’s office, and in Wozzeck’s struggle with Marie, that were carefully shaped through movement and light. And there were others, most notably Wozzeck’s own death and its aftermath, in which there was almost no movement at all except in the extraordinary thrust of the music itself. Michael Black’s chorus lent wild energy, and plenty of high notes, to the tumultuous tavern and barracks scenes. And the members of Chicago Children’s Choir, who taunted Wozzeck’s little boy with the news of his parents’ tragedy, contributed their generous share to the spellbinding final seconds, doing thoroughly professional work. 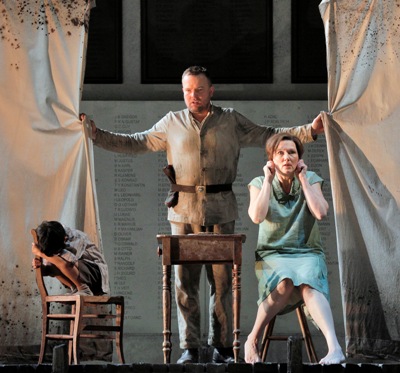 Wozzeck the soldier has something in common with Willy Loman, Bigger Thomas and Tom Joad 20th-century protagonists with whom destiny also collides. We sense early that Wozzeck (the smoldering young Polish bass-baritone Tomasz Konieczny is not going to prevail in the battles of strength and wit to which he is subjected. The fact that Konieczny appears young heightens the sense of brutal offense in the science experiments to which he is subject, and the continually harassing tactics that wear him down. When Wozzeck’s common-law wife Marie (soprano Angela Denoke becomes exhausted by their poverty and begins to stray, Wozzeck’s actions spiral toward a horrible end that will make an orphan of their innocent little boy. 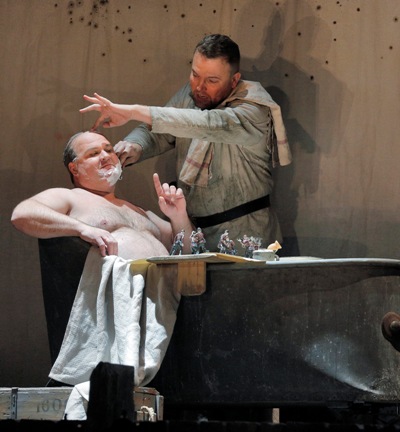 The tragedy is told in short scenes propelled by (usually) quick changes behind the yards of mud-splotched fabric that’s strung like a shower curtain across the entire stage; racing stagehands yank the curtain from side to side, sometimes obscuring the music with a metallic whine. In the first few scenes, Wozzeck is seen shaving the face of his nervous and unpredictable Captain. (Gerhard Siegel, one of the great character tenors of our time, gives a tour de force of tetchy dyspepticism). By the time Wozzeck has uttered his first “but,” to defend himself against the Captain’s paralyzing criticisms, the  hopelessness of the soldier’s situation is clear. Later we witness poor Wozzeck as he submits to hideous experiments by a doctor who is hoping to cash in on Wozzeck’s eagerly wished for insanity. (British bass Brindley Sherratt is gallows funny in his predeliction for sharing the details of other pathetic specimens, described with loving pride.) 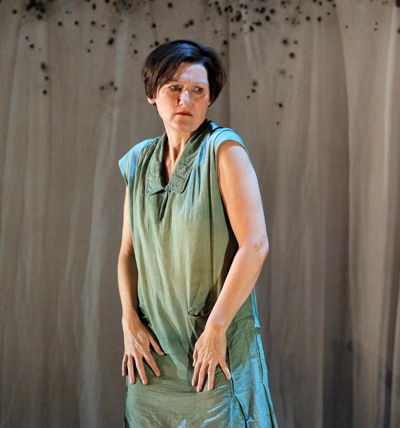 Meanwhile, anxiety-ridden Marie sings an unforgettable lullaby to her son (Zachary Uzarraga), caressing the lines “Hush-a-bye baby, cradle will fall, Nobody gives me anything at all” with heartbreaking delicacy. As Marie begins her tight spiral of descent through flirtation and betrayal to guilt and panic, she finds herself paging randomly through a Bible, rather like Carmen on the smugglers’ mountainside hideaway, turning up nothing but the promise of torture and death. The rivetting soprano is also a superb actress; she gives a fully considered, harrowing portrayal. Marie’s temporary love interest, the swaggering Drum Major, is dashingly sung by Stefan Vinke in his Lyric debut.

As a matter of fact, this “Wozzeck” marks the Lyric debut of Konieczny, Denoke and Siegel as well. Are these mightily accomplished performers offering us a sneak peek of as yet unannounced casting in the Wagner “Ring” to come? If so, bring it. The roles of the God Wotan (Eric Owens) and his daughter Brünnhilde (Christine Goerke) have already been announced but the remaining players are yet unknown. It bodes well that three of these singers are accomplished Wagnerians who happen to sound great in the Civic Opera House. Konieczny, the Wozzeck, has played the evil Alberich (and Wotan, too) in Vienna. Siegel, the Captain who tortures Wozzeck, is an international favorite as that other torturer, Mime, who hounds Siegfried. And tenor Vinke has played Siegfried in 17 Ring Cycles including Bayreuth. 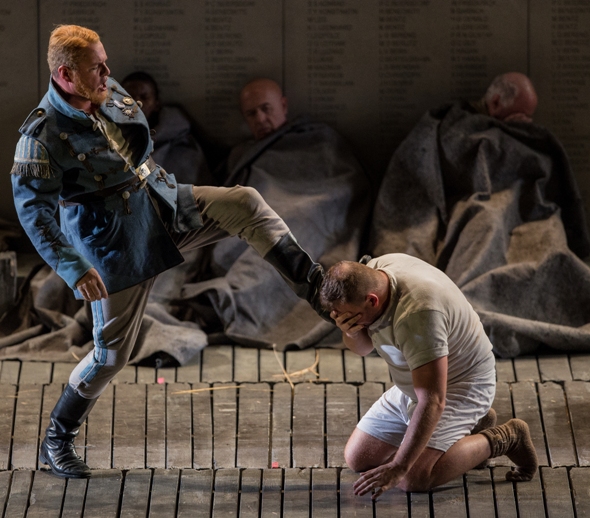