When Michael Grant and a group of fellow Chicago actors formed Seanachai Theatre Company back in 1995, the name seemed inspired, exactly apt, a no-brainer. The word seanachai means story-teller in Irish Gaelic, and that’s what this troupe meant to do – stage the rich legacy of stories in the tradition of Irish theater.

But after building its own legacy through two decades under the Seanachai banner, the company finally acknowledged that what had seemed obvious was anything but. The play-going public found the name hard to pronounce (it’s Shawn-uh-kee), to many its meaning remained unclear and to others who certainly did know what the word meant, it only created confusion: The Seanachai business office would get calls from Chicago Irish looking for a story-teller to entertain at a party.

So as this 20th anniversary season approached, Chicago’s only professional Irish theater decided to rename itself in the plainest possible way. Behold the Irish Theatre of Chicago, which has its second birth Nov. 28 when the rechristened company makes its season debut with Conor McPherson’s “Shining City.”

What emphatically will not change, says co-founder and artistic director Grant, is Irish Theatre of Chicago’s commitment to the likes of playwrights Sean O’Casey, Eugene O’Neill and Conor McPherson – or the company’s ensemble-driven approach to bringing plays to the stage.

“We produce Irish theater but the product really is the ensemble,” says Grant, a University of Notre Dame graduate with a degree in business who got the theater bug in college. “We try to pick shows that fit our ensemble and we’ve always been careful not to take on more shows than we felt comfortable with. We do two shows a season, which means we’re never slapping a play into a slot just to fill it. We’re passionate about the things we present.”

Irish Theatre of Chicago, Version 1.0, sprang to life when a clutch of actors got together to produce the premiere of Ann Noble Massey’s “And Neither Have I Wings to Fly,” a venture that indeed took wing and flew for nine months. During that long run, Grant recalls, the actors began reading through other plays together, discovered they were a band of brothers (and sisters) at heart and formalized themselves into the Seanachai Theatre Company.

While Grant’s own ethnic background is Irish, and several others in the official ensemble of some 16 actors also claim Irish descent, it isn’t a requirement. The lure of glorious language in plays like O’Neill’s “A Moon for the Misbegotten,” O’Casey’s “The Shadow of a Gunman” or McPherson’s “The Seafarer” appeals to the Irish heart in every actor, Grant says. 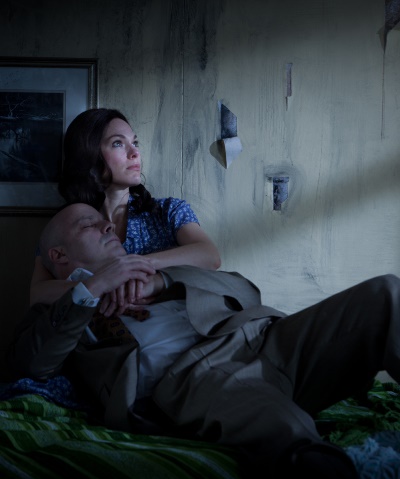 He offers McPherson as a case in point. “Shining City” will be Irish Theatre of Chicago’s third go-round with this new star of Irish drama, after “The Weir” and “The Seafarer.”

“McPherson is just my favorite writer,” says Grants. “He has said, ‘If you create full characters, you can make a play from almost any of them.’ With McPherson, so much of the story is being told underneath the surface, which not only adds great depth to the drama, but also produces wonderfully rounded characters.”

In “Shining City,” something of a contemporary ghost story, two Dublin men wrestle the living and the dead. Ian, an ex-priest turned therapist, takes on his first patient, John, a man who claims to have seen the ghost of his recently deceased wife.  What follows is a haunting and suspenseful tale of what it means to lose faith – in God, in relationships and in one’s self.

“The two main characters are each dealing with their own unresolved ghosts deep within themselves,” says Grant. “As one listens to the other work through his issues, the listener also is transformed, almost against his will. That’s such an intimate thing to peek in on – and exactly the kind of play we like to do.”

In the spring, Irish Theatre will present the world premiere of founding ensemble member Karen Tarjan’s “The White Road,” about Ernest Shackleton’s ill-fated attempt to cross Antarctica from sea to sea via the South Pole.

Both plays will be performed at The Den Theatre, 1333 N. Milwaukee in Wicker Park, the new permanent home of Grant’s once-peripatetic company.

“The Den is just an inviting space to enter,” says Grant. “The lobby is welcoming and there is a variety of performance spaces. We like being in a space where we can interact with our audience after the show.”

“The White Road,” which opens April 20, 2015. “That will be 20 years to the day since we opened our first show,” Grant says. “And Karen’s play also will be a world premiere. This is just right.”