CSO in Asia: At tour’s end, sense of triumph magnified by journey of maestro, musicians

SEOUL – The Chicago Symphony Orchestra had come a long way, in every sense and under trying circumstances, to hear the Seoul Arts Center rocked by applause on the final stop of its Asia tour.

In the quiet of an interview before the closing concerts here, conductor Lorin Maazel, who had joined the fraught tour in Hong Kong to lead the CSO across China to this conclusion, its first visit ever to Seoul, described his thrown-together effort with the orchestra not merely as a challenge met, but as “an impossible task.”

That the mission was accomplished as impressively as it was, Maazel said, bore witness not only to the Chicagoans’ musicianship but also to their collective professionalism. 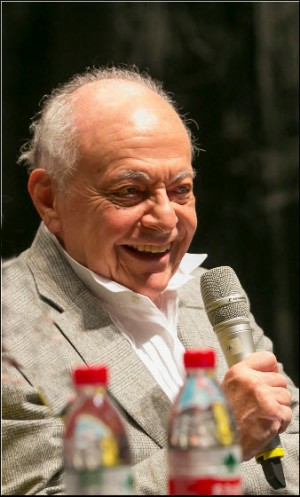 “Someone once asked Orson Welles the secret to success as a performer,” mused the conductor. “Welles, who was by that time near the end of his career, thought about it for a moment, then replied: ‘Put on the apron and shut up.’ It’s our responsibility as professionals to be our best under any circumstances.

“The person in that audience who has paid for his ticket doesn’t care about your personal problems, and he shouldn’t. During that time on stage, no matter what the issues may be off-stage, you simply have to put all that aside and do what you’re trained to do, and do it well.”

Perhaps only half joking that he accepted the CSO’s appeal for help as an adventure, when music director Riccardo Muti was forced to drop out of the tour because of surgery, Maazel admitted the ramp-up with the musicians back in Hong Kong was a wild plunge in very public view.

“I hadn’t conducted the Chicago Symphony in a decade or more, though my association with the orchestra goes back 40 years,” he says. “It is an extraordinary ensemble and yet, that said, we were jumping into the middle of great masterworks on the fly together, trying to prepare for concerts on just one rehearsal for each work. That’s a really tall order. But touring makes such demands, and I think I have grit.” 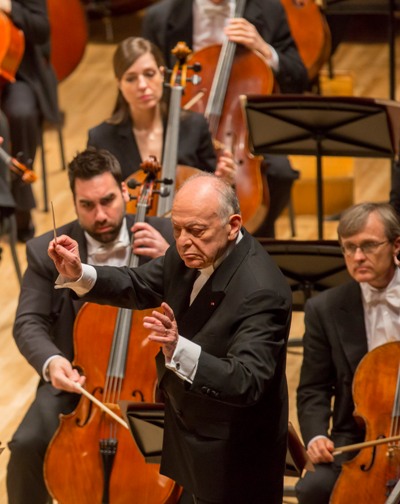 To observe those rehearsals – for Mozart’s Symphony No. 41 (“Jupiter”), Mendelssohn’s Symphony No. 4 (“Italian”), Brahms’ Symphony No. 2 and the work that many musicians said took the greatest toll on them, Beethoven’s Symphony No. 3 (“Eroica”) – was to see the plucky 82-year-old Maazel as master of both music and circumstance.

Perched on stool, a little noticed score open on the conductor’s stand, Maazel would draw the orchestra to him by the most economical of means. He was a center of calm in the storm, and very quickly the orchestra coalesced in his assuring presence.

“The first concerts weren’t perfect but they were quite good,” he says. “And each time we came back to Mozart or Brahms or certainly the ‘Eroica,’ I felt more confident about taking interpretive risks because I knew the orchestra was prepared to go with me.” 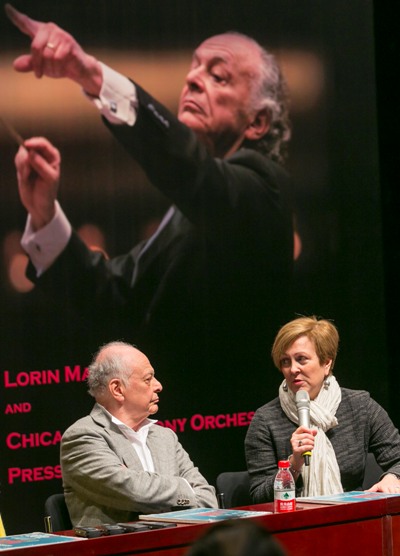 No doubt, Maazel agreed, the compressed ramp-up was hastened by his prodigious habit of conducting concerts without the interference of a score. Many conductors do some pieces from memory; Maazel eschews such a security net not only for all the grand standard works but also for seldom encountered fare, like Verdi’s “I vespri sicilianni” on this tour.

“I prefer having eye contact with the musicians,” he explains. “It’s liberating physically as well as mentally.”

By the time these ad hoc collaborators reached Seoul, even Beethoven’s daunting “Eroica” Symphony displayed the pliancy of well-condition chamber music, though with a lot more fire-power.

Meanwhile, a flu bug was working its way through the Chicago Symphony and it had not spared the maestro. Maazel’s eyes were watery and his voice congested. But hours later, after a rousing Brahms’ Second Symphony set off a clamorous response in the nearly full 2,400-seat Seoul Arts Center, a beaming Maazel and his troupers came through with the demanded encore: Brahms’ sensual Hungarian Dance No. 1.

After making the jubilant listeners beg a bit, and gulping water backstage, Maazel stepped onto the podium again, this time unleashing the CSO brass in Wagner’s raucous “Lohengrin” prelude. It was a fire-balling effort, energized, joyful.

The kind of performance that only happens, as Maazel would say, when you tie on your apron and just do it.

Photo captions and credits: Home page and top: Lorin Maazel conducts Brahms’ Second Symphony with the Chicago Symphony Orchestra in Beijing on the Asia tour. Descending: Speaking to the press in Tianjin, China, Lorin Maazel jokes that the scores were lost and that he would be forced to conduct without benefit of a score. In fact, he always conducts from memory. Lorin Maazel conducts the CSO in Verdi’s Overture to “I vespri siciliani” in Tianjin. At a press conference in Tianjin, CSO president Deborah F. Rutter thanks conductor Lorin Maazel for stepping in on short notice to lead the Asia tour after surgery forced music director Riccardo Muti to drop out. Below: The Chicago Symphony Orchestra and conductor Lorin Maazel perform at the Tianjin Grand Theatre. 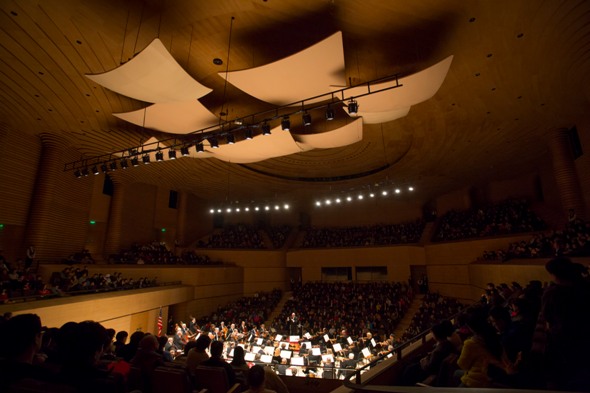