Report: Deep into its Asia tour, the harrowing start now distant in the rear view mirror, a settled Chicago Symphony Orchestra and conductor Lorin Maazel have dazzled audiences from Hong Kong to Tianjin.

TIANJIN – Conductor Lorin Maazel has pretty much peaked out in his appreciation of the Chicago Symphony, even topping music director Riccardo Muti’s proud comparison of the orchestra to a Ferrari.

Speaking to the Chinese press in Shanghai, shortly after he caught up with the CSO to take over its Asia tour conducting duties from Edo de Waart, the grey eminence Maazel summed up the impression he drew from his first rehearsal with the orchestra: 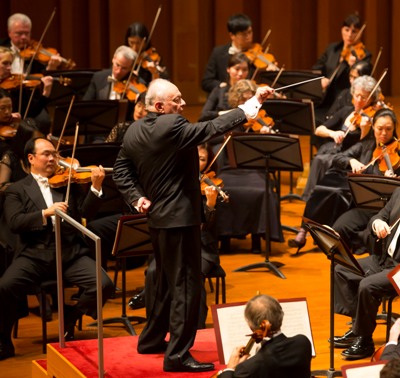 By the time the orchestra reached Beijing, and Maazel had conducted concerts in both Hong Kong and Shanghai – including Mozart’s Symphony No. 41 (“Jupiter”), Beethoven’s Symphony No. 3 (“Eroica”), Mendelssohn’s Symphony No. 4 (“Italian”) and Brahms’ Symphony No. 2 – the 82-year-old maestro had ratcheted up his praise.

The Chicago Symphony, Maazel declared before a large press contingent in Beijing was “an ensemble in a class by itself.”

That singular encomium indeed raised the ante on Muti’s likening the CSO to an Italian sports car for its instant responsiveness and thoroughgoing finesse. And Muti even admits other orchestra’s to the CSO’s charmed circle.

Last October, in a New York television interview with Charlie Rose that took place while the orchestra was performing a series of concerts at Carnegie Hall, Muti declared Chicago to be one of the two or three best orchestras in the world. When Rose asked which bands Muti would deem worthy company, Muti readily named the Berlin Philharmonic and the Vienna Philharmonic. 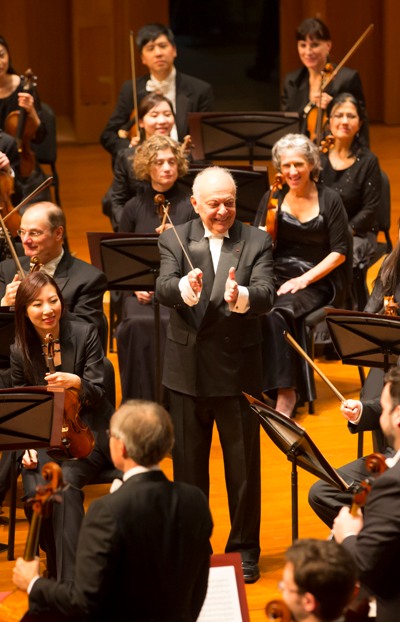 As the CSO has cruised across China, playing to noisily enthusiastic audiences, the sound that has coalesced under Maazel’s leadership – burnished, precise, finely contoured – indeed seems to bear out Muti’s Ferrari fancy. If Maazel’s “class by itself” comment registers as a bit hyperbolic, his conducting style does not. It’s the subtle, adroit handling of a driver who knows a thing or two about high-performance machines.

After all the stress-inducing craziness that marked the beginning of this Asia tour in Taiwan, under the game and effective stewardship of conductor Osmo Vänskä, the progression from Hong Kong and Shanghai to Beijing and Tianjin has played out with a calm that has allowed the CSO to recover its focus and fluency.

Wrote Chinese critic Yang Jianguo in the Xinmin Evening News after the Shanghai concert with Maazel: “The second half featured Beethoven’s “Eroica” Symphony. Within the span of 55 minutes, Maazel created a huge structure. Under his direction, the last movement that contains such varied sections grew stronger and stronger, and the musical flow widened and strengthened like a great river.”

That stability also has told in the interpretive variety Maazel has elicited from the musicians from one performance to the next. 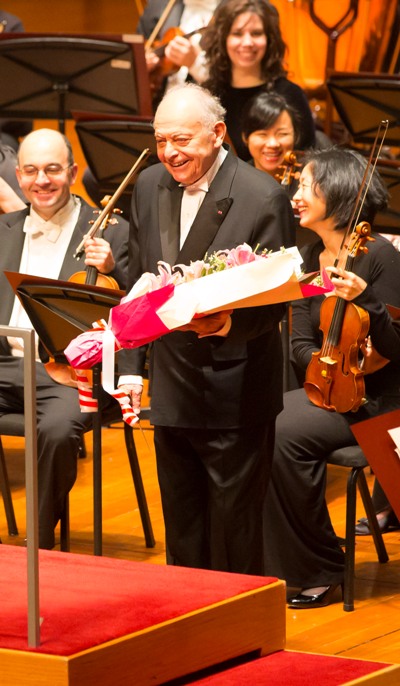 The ever changing acoustical settings similarly have altered the impression made by the tour’s two anchor works, Beethoven’s “Eroica” Symphony and Brahms’ Second Symphony.  The lively environment of Beijing’s spacious National Centre for the Performing Arts seemed to fan the fire of Brahms’ symphony – notably in the ripping brass salvos that crown the work – whereas the intimacy of Tianjin’s handsome new 1200-seat Grand Theatre imbued Beethoven’s “Eroica” with the warmth and clarity of chamber music.

Audience response, rousing all the way, felt especially exuberant at Monday night’s concert in Tianjin, where it also became clear that the CSO’s cruise across China was being tracked by expectant ticket-holders down the road.

At the conclusion of the “Eroica” on Monday night, listeners who had read accounts of Maazel’s encores – a sexy, swooping Brahms’ Hungarian Dance No. 1 and an all-stops-out holiday for brass in Wagner’s Prelude to Act III of “Lohengrin” – knew what they wanted when the “Eroica” ended. “Play the Brahms!” one determined fan shouted repeatedly in Chinese. But it was not to be.

Instead, Maazel unleashed the brassworks in Wagner. Amid the whoops that followed, the Brahms advocate was laughing with his friends. Nice try. Anyway, he’d already heard the Ferrari purr. And now he knew what the supercharged CSO could be like in full flash, pedal to the metal. 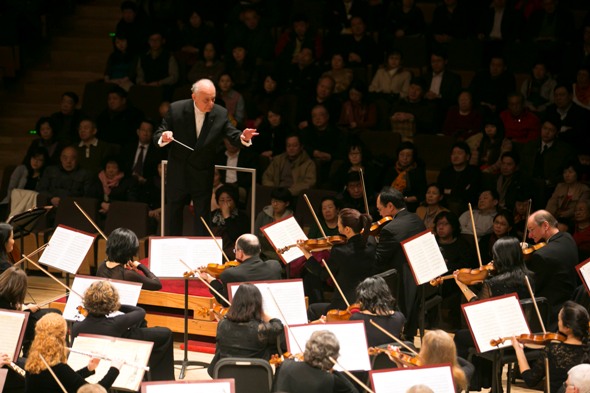