Review: Amid swirl of late changes, Chicago Symphony Orchestra’s first Asia performance gets a warm reception with Osmo Vänskä conducting and concertmaster Chen, a Taiwan native, in the spotlight.

TAIPEI, Taiwan – The Chicago Symphony Orchestra presented the first concert in its troubled Asia tour here Jan. 25 with a performance that flew on a wing and a prayer.

Make that one rehearsal and the grace of some sterling musicianship.

Under the baton of Osmo Vänskä, an 11th-hour replacement for ailing CSO music director Riccardo Muti, the orchestra offered the well-filled Chiang Kai-shek National Concert Hall a generous program that made a big splash even if it didn’t entirely sparkle. 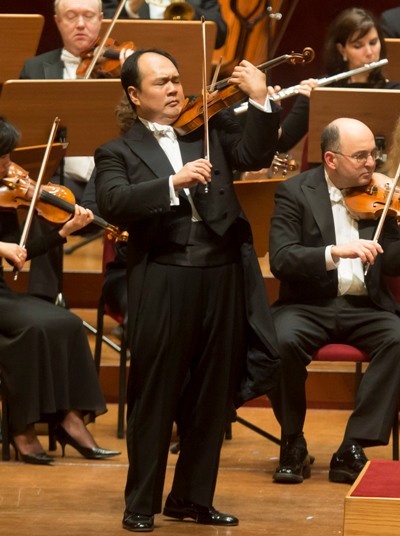 While the orchestral spotlight fell on performances of Mozart’s Symphony No. 41 in C major (“Jupiter”) and Brahms’ Symphony No. 2 in D major, the hit of the evening was the appearance at center stage by CSO concertmaster Robert Chen, a native of Taiwan, whose elegant and agile account of Mendelssohn’s Violin Concerto in E minor drew a stormy ovation.

Chen then trumped himself with an encore, the Largo from Bach’s Sonata No. 3 in C major for solo violin, and again his radiant playing set off a noisy burst of approval.

If the Mendelssohn was the night’s shining moment, the rest of the concert was remarkably good considering that orchestra and conductor did it literally by the seat of their jeans. It helped that Vänskä, music director of the Minnesota Orchestra, had conducted the CSO in three performances of Brahms’ First Symphony – with normal rehearsals – back in October.

“I think there was a benefit in that continuation,” Vänskä said amid a general atmosphere of relief backstage after the Taiwan concert. That benefit might be summed up in the single word trust.

There was no time for getting-to-know-you when the maestro and the band grabbed one brief chance to get their Mozart and Brahms – and Mendelsssohn – on the same page. Vänskä, in baggy blue jeans and a black T-shirt, basically greeted the musicians with “Good morning, time is short so please just roll with me, let’s go.”

And the musicians did go with him. They also made a collective adjustment to the ringing acoustics of the empty auditorium.

Built in 1987, the Chiang Kai-shek National Concert Concert Hall is an architectural beauty in traditional Chinese style, its exterior highlighted by an orange-gold pagoda-like roof and imposing crimson support pillars. The entrance lobby, broad and open, has a more modern aspect, with grand red-carpeted staircases at each side leading up to the hall.

The wide, deep auditorium faces a splendid installation of organ and pipes at the back of the stage. Hard-surface facings on the boxes and balconies contribute to the hall’s lively sound, which posed a particular challenge to the CSO in clarifying the rich, brass-laden textures of Brahms’ Second Symphony.

But like most concert venues, this one presented a warmer acoustic once the hall was filled with listeners.

The concert performance spoke volumes about the meaning of virtuosity.  If it was not the Brahms Second either Vänskä or the CSO might aspire to – a bit overdriven, the voicings occasionally blurred in the epic outer movements – it was brilliant in its sweep and urgency, qualities achieved on faith and one quick read-through.

Mozart’s “Jupiter” Symphony was more problematic. The old saw about Mozart’s piano music being too easy for children and too difficult for adults assuredly does not apply to his sublime last symphony. It’s all about balance, contour, pulse and impulse. What the Taiwanese heard, the CSO strings’ lustrous effort notwithstanding, was a “Jupiter” gloss.

This much done, Vänskä and the Chicago virtuosi immediately face what may be an even taller order. In one rehearsal Saturday afternoon, only hours before the second concert, they must prepare Verdi’s Overture to “I vespri siciliani,” the Tchaikovsky Violin Concerto with soloist Maxim Vengerov – who will have just stepped off a plane from Moscow – and Beethoven’s Symphony No. 3 in E-flat major (“Eroica”), arguably the touchstone work of the tour.

It isn’t a rabbit that Vänskä and the CSO now must pull from a hat. The challenge is to conjure an “Eroica.”