Theater for two: Kids in search of themselves, and a pop-up polemic that goes off the rails 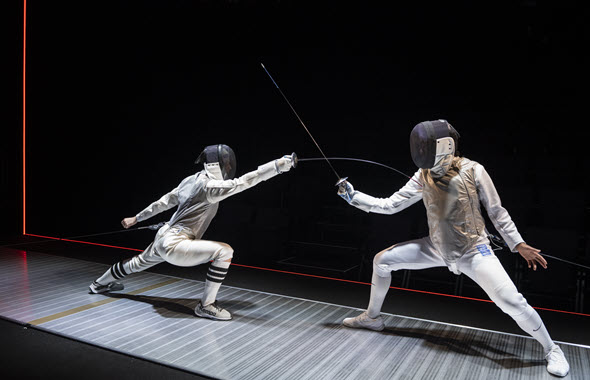 Review: “The Chinese Lady” by Lloyd Suh, directed by Helen Young and produced by TimeLine Theatre at Theatre Wit thru June 18. ★★

Plays for two actors, known in the theater world as two-handers, make special and perhaps obvious demands on the players, the director and certainly the playwright. Time was when all theatrical presentations were monodramas — until Aeschylus, in fifth century B.C. Greece, made the radical and transformative leap of adding a second actor. But placing the whole burden of a play’s instigation, elaboration and denouement on two speakers is to set a high bar for success, as demonstrated by enterprises now on the boards at Writers Theatre and TimeLine Theatre. The former stumbles when it abandons language for physicality; the latter veers from charm and wit into polemic, wit driven out by cant.

Gracie Gardner’s “Athena,” at Writers, is a coming of age play about two teenage girls who share a passion for fencing. Both are counting on their skill to win them a college scholarship, a way up and out of their lower middle-income lives to a rosy future. One of the girls, Mary Wallace (played by Aja Singletary), is Black. She’s very bright, a serious student and comes from strict parenting; she’s also inexperienced in the world, not exactly reclusive but not socially outgoing, either. 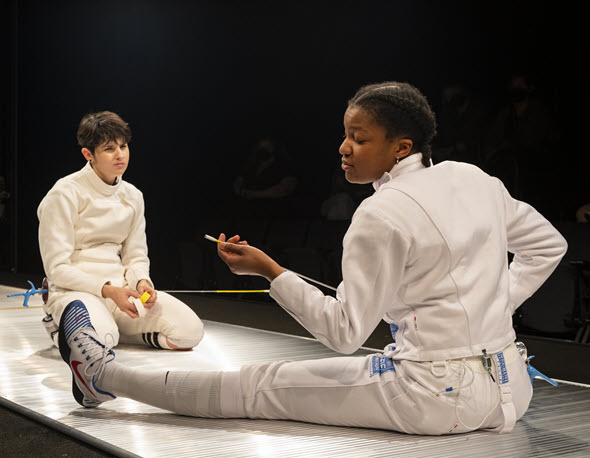 Her sparring partner, a white girl (Mary Tilden) who lives with her divorced father, calls herself Athena, which is not her real name. She identifies with the assumed moniker, and she won’t tell anyone her actual name. Athena was the ancient Greek’s goddess of the arts, wisdom and war — or war-craft,  as the young fencer puts it. She wears her pseudonym like a shield. Athena is a skilled, single-minded fencer, more accomplished than Mary Wallace when the two first meet at the training center.

What playwright Gardner has placed before us here are two isolated teenagers, their complications skillfully intimated, then steadily illuminated. And both actors convey the subtle interleaving of competence, uncertainty and vulnerability that draw the two fencers — the two girls behind those protective masks — ever closer together. But Athena clearly rejects the very idea of their growing close, though she’s the one who suggests they continue to train as partners. But that’s all, just train. This will not be about bonding or friendship. And then she invites Mary Wallce to join her at a disco bar, even though they’re both underage. 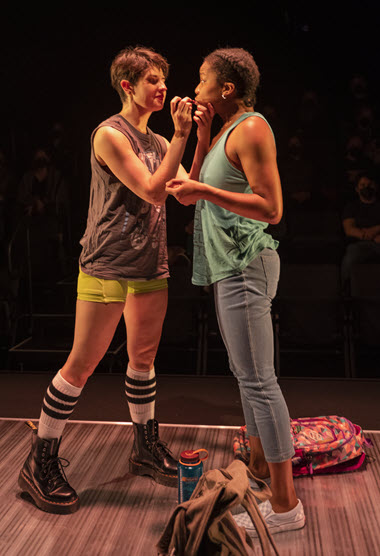 One of the play’s most telling moments comes out that alcohol-fueled evening. Mary Wallace ends up quite ill and gets grounded; Athena observes wryly (one might suspect ruefully) that her dad could never make grounding stick. While Mary Wallace seems to be the one on a short parental leash, Athena has created a protective bubble around herself, a closed, illusory world of self-sufficiency. It’s a credible and affecting portrait, and Tilden evinces Athena’s internal conflict with Everygirl authenticity.

Designer Arnel Sancianco’s set is a long, narrow fencing platform, with the audience arrayed on both sides. Much of the play finds the girls in their full training gear either thrusting and parrying or going through warm-up exercises. And it all works, up to a point — the final point, where something has to be resolved. That’s where language fails the playwright, whose characters go nearly silent. and action — for the first time, awkward action — stands in as if to reveal some consummate thing about the title character. it doesn’t. Instead, we get an unexpected, rather cheap and melodramatic flourish, and the play ends with a thud.

At least that crash comes suddenly, after a largely engaging play. Over at TimeLine Theatre, Lloyd Suh’s longer play, “The Chinese Lady,” hits an early peak of beguiling cleverness — only to begin a protracted descent through increasingly tedious repetition that ends in the solemnity of a moralizing lecture. Not to worry, I won’t spill those beans here. 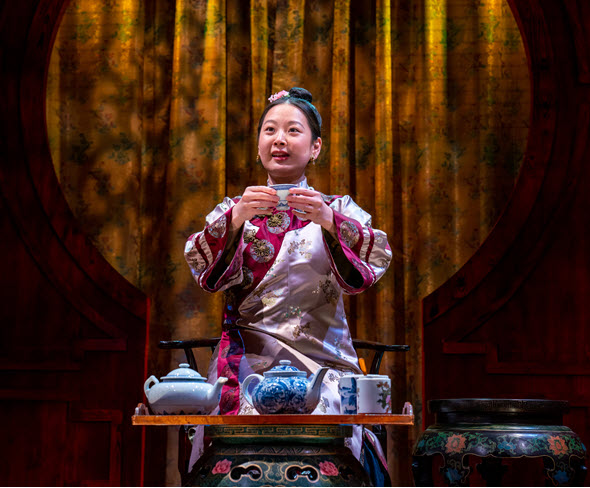 The setup of this historically based tale is the arrival of the first Chinese female ever to set foot on U.S. soil, in the 1830s. The girl, Afong Moy, was purchased (or long-leased) from her father at age 14 and put on display in cities in the East and South, available for public gawking at a very cheap admission price. Mi Kang portrays this exotic object of curiosity, with Glenn Obrero as her assistant Atung. The two interact very little; Afong Moy makes it clear that Atung is an unimportant adjunct and he grins or grimaces and withdraws — repeatedly.

Kang’s opening flourish, as the 14-year-old Afong Moy decked out in a brilliant costume and eager to share her culture with these voyeuristic white people, is a delight. She speaks in Chinese that we hear as English, narrating the meal she eats and a tea ceremony. After describing in boggling detail how a girl-child’s feet are heated, softened, broken and bound in a timeless tradition that honors female delicacy, Afong Moy rises and walks, perhaps just to show that she can. 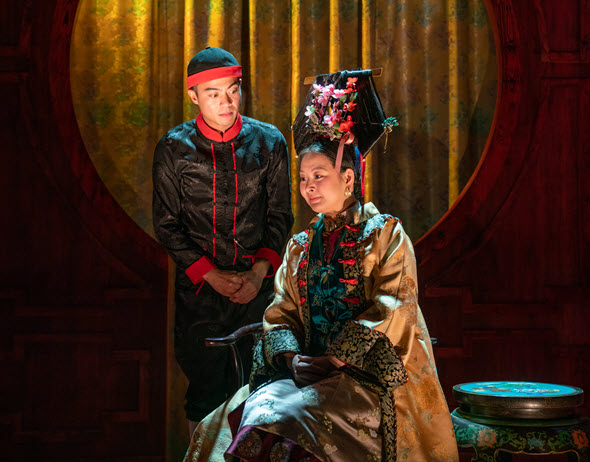 From there, the years begin to unfold as the same scene is repeated with modifications and variations, but also a numbing sameness — numbing to Afong Moy, but also, alas, to the viewer. Not surprisingly, the young woman begins to lose touch with her Chinese roots, indeed to become Westernized. And one wonders, where is this going? Perhaps somewhere quite compelling and unforeseeable. The historical Afong Moy apparently vanished in 1851, discarded, no longer exotic or young and captivating. That sounds like the stuff of a powerful final act. But no.

We’ve paid our 25 cents to ogle this Oriental novelty. We’re in our seats. They’ve got us. And now it isn’t just the scene that changes, but rather the whole pitch. Afong Moy, and Toto if you’re listening, we aren’t in Kansas anymore. We’re in a different play, or one might even propose not a play at all. We’re in a historical, statistical rant, a guilt trip down memory lane where just moments before there were actors and a story. Instead of a tragedy, or any other perspective on the human comedy, we’ve modulated into political theater, as perhaps contrived by P.T. Barnum.