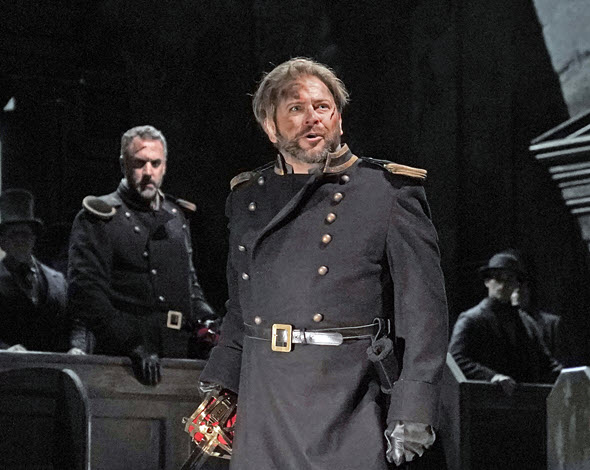 Review: After its long shutdown through the pandemic, Lyric Opera of Chicago returns to life with new music director and fresh look. ★★★★★

Life is but a walking shadow, declares the blood-steeped Scottish king Macbeth in Shakespeare’s tragic play of hubris and ruin. The crown he has seized now crumbling about his head, the reeling and fatalistic Macbeth observes that “all our yesterdays have lighted fools the way to dusty death.” 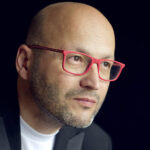 Light and shadow. In his operatic retelling, Verdi went straight to heart of the tale’s dark and brilliant confusion – its chiaroscuro – and it resonates with bleak authenticity in Lyric Opera of Chicago’s return to the stage. The potent new production of “Macbeth,” devised by David McVicar, was led by Enrique Mazzola in his first flourish as Lyric’s music director.

Mazzola had already made his mark at Lyric in guest appearances that led the company to put its artistic fortunes in his hands. This “Macbeth” was something apart, not just an excellent example of the “early” Verdi in which he specializes, but more, a ringing affirmation of the conductor’s sensibility to opera as theater. In pacing and arc, in the spotlighting of solo voices and his measured indulgence in the work’s crucial choral episodes, this was gripping music drama.

All that said, what is perhaps most striking about Lyric’s new “Macbeth” is the commingling of designer John Macfarlane’s unit set (in fifty shades of gray), David Finn’s eerie play of light upon it, and the imaginative tableaux that McVicar frames within what is essentially a weathered old chapel, infusing the whole proceeding with singular irony, or perhaps singular perversity. 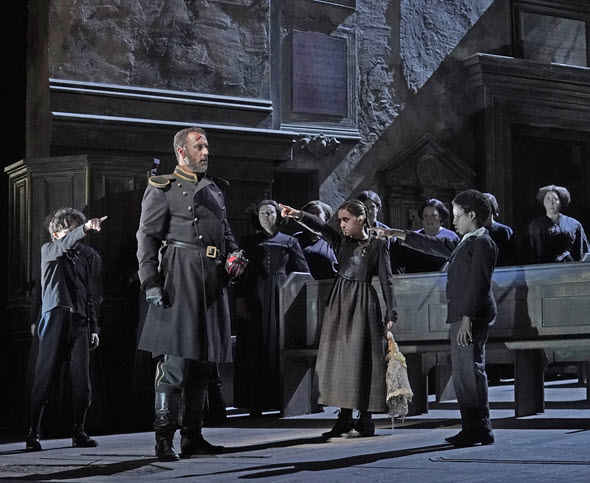 Banquo learns from the unfathomably strange witches that he will sire a line of kings.

The story of “Macbeth” resonates of classical Greek tragedy. In the aftermath of a battle, King Duncan’s valiant general Macbeth and his bosom pal Banquo encounter a coven of witches who hail Macbeth by his title as Thane of Glamis – only to hail him a second time as Thane of Cawdor, though another man holds that distinction. Then the witches greet Macbeth yet again as king-to-be. Banquo naturally asks, “What about me?” To which the hags reply that he will be less than Macbeth and yet greater, for Banquo shall sire a line of kings.

When Macbeth learns that Cawdor has been executed and that title conveyed to him as reward for his bravery, the astonished thane can only wonder about the greater possibility of a crown. And when he relays these strange prophecies to his more ambitious and enterprising wife, Lady Macbeth, the table is set for bloody action, usurpation and a rising tide of slaughter. 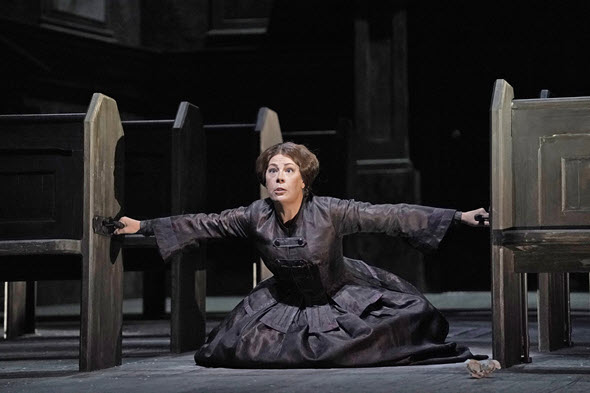 Bloodthirst in a Scottish chapel: Sondra Radvanovsky is a Lady Macbeth of towering ambition.

Bass-baritone Craig Colclough makes an imposing Lyric debut as Macbeth. An anti-hero in heroic voice, Colclough imbues the morally shredded king with grand vocal prowess but at the same time a bruised soul and vulnerable mind. Just as the horrific act of murdering King Duncan in his sleep (a guest under their own roof) is a peak episode of Shakespeare’s play, Verdi also zooms in on this pivotal moment with music of gavanizing pitch and purpose. Here, Lady Macbeth – “unsexed,” to use her word – stuffs her husband with the dubious courage of villainy. 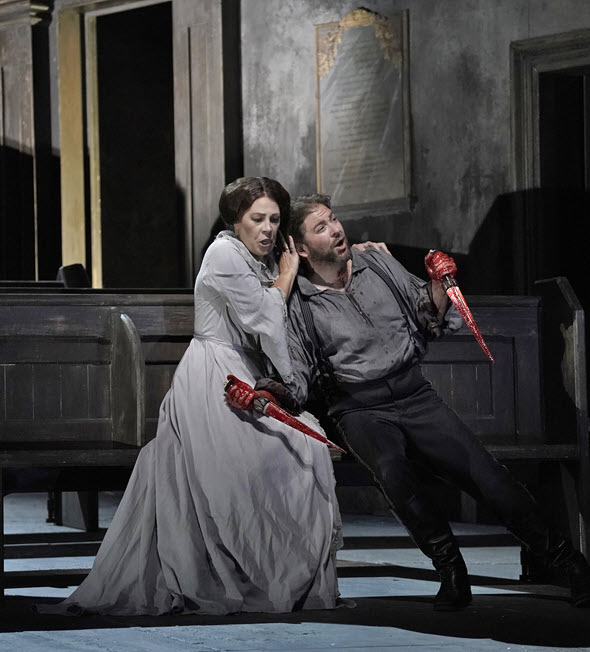 Surging conflict is spawned as Lady Macbeth drives her husband to stay the bloody course.

Soprano Sondra Radvanovsky’s treacherous Lady Macbeth all but steals the show. (Indeed, a case could be made that Verdi construed the opera as a play about Macbeth’s evil queen.) But a key paradox of the play is that Lady Macbeth isn’t nearly as tough as she thinks she is, and Radvanovsky traced the queen’s ascent and fall through brilliantly gauged vocal contours – from clear-eyed resolve to dispatch Duncan in her aria “La luce langue” (The light is fading) to her sonambulic desperation to cleanse her hands, and her overwhelmed conscience, of the old king’s blood. 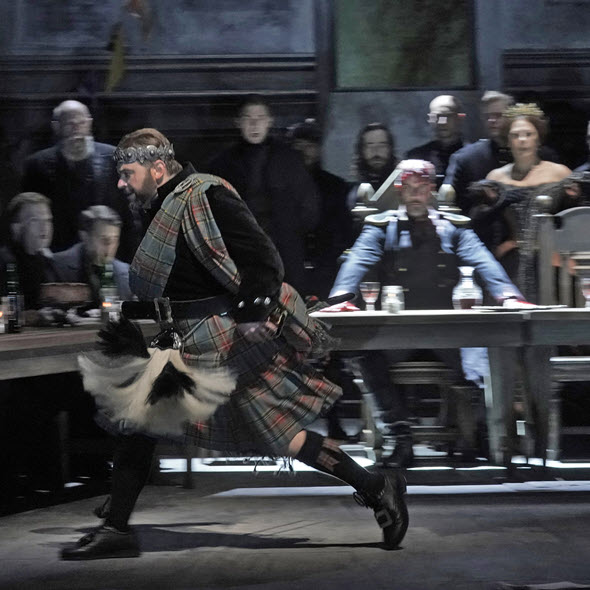 Macbeth, who alone sees the ghost of murdered Banquo at the table, flees his own banquet.

As the lesser but greater Banquo, bass-baritone Christian Van Horn, an alumnus of Lyric’s Ryan Opera Center for pre-professional training, cuts an imposing figure in life and a looming specter in death when, cut down on Macbeth’s authority, he returns to haunt his murderous former friend in the midst of a banquet. Here we find Macbeth already in his cups, unbalanced and fretful when the scene begins. McVicar doesn’t leave him far to slide. Van Horn, robust of voice early in the opera, is now glaring, silent, terrifying. If McVicar’s take on the scene is a bit overheated, in this performance the tumult remained musically sound under Mazzola’s reins. 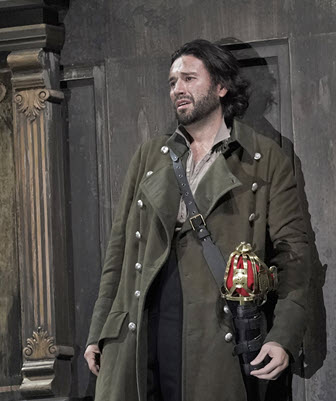 Tenor Joshua Guerrero contributed one of the evening’s finest vocal moments as Macduff, the Thane of Fife, whose family Macbeth orders exterminated with the intentional of also getting rid of Macduff as a threat to his crown. Upon hearing of his family’s fate, Macduff sings a heart-rending lament that Guerrero delivered with consummate tenderness.

“Macbeth” is awash is marvelous choral music, for the multitude of witches (Verdi saw a chorus blossoming from Shakespeare’s three “weird sisters) as well as the general folk. The choral capstone is surely the grieving Scottish refugees’ “Patria oppressa” – a near twin of the Hebrew slaves’ “Va, pensiero” in Verdi’s earlier “Nabucco.” The Lyric Chorus was splendid throughout, and Mazzola’s orchestra likewise shone at every turn: solid building blocks for a rewarding night.

The “chapel” set worked generally well, though the action occasionally seemed alien to the surroundings. But the prevalent darkness, or rather the high contrast and conflict between darkness and light, holy ground and wholesale slaughter, succeeded in energizing the story and keeping it on edge. 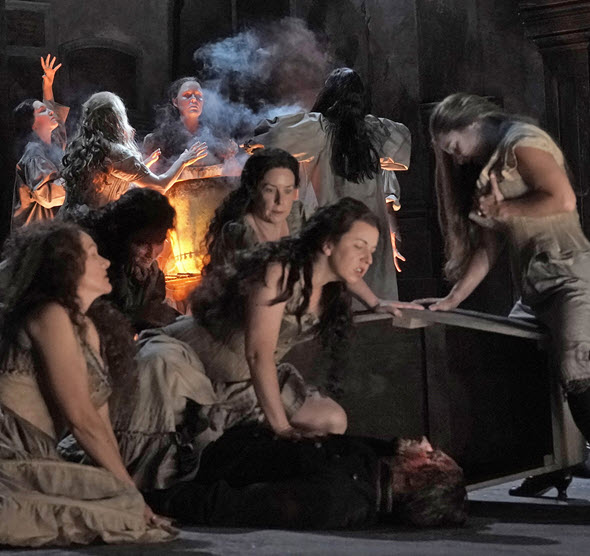 The chorus, a multitude of prophesying witches, was splendid throughout.

Speaking of edge, it would be remiss not to mention the electricity in the opera house, the sheer glee evident in an audience that had been shut out for a year and a half. The returning throng was greeted by comfy new seats throughout the spiffed up house, all repositioned for improved sightlines. Lyric general director Anthony Freud’s welcoming words from the stage were answered by a roaring ovation. And at the end, the standing, cheering audience seemed to give no thought to leaving. It was just so good to be back.