Mezzo-sopranos square off, one as Carmen; the other (in russet beard) is, yup, Don José 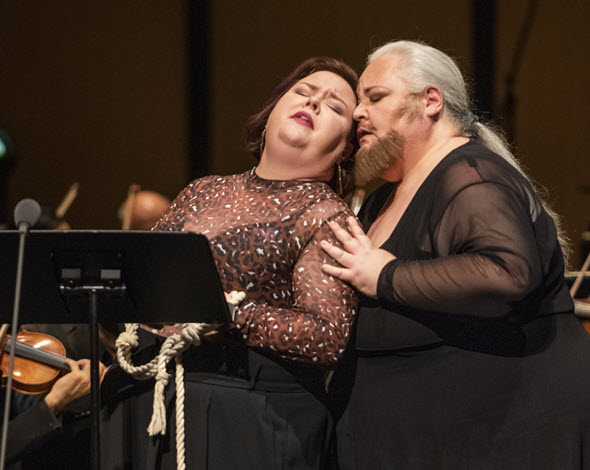 Review: After months of darkness, Chicago Opera Theater lights up the Harris Theater for an off-beat concert version of Bizet’s opera. ★★★

The gypsy femme-fatale Carmen of Georges Bizet’s opera is more than figuratively a force of nature: She’s an authentic creature of the natural world where life, as the English philosopher Thomas Hobbes observed, is “nasty, brutish and short.” The truth of that hard reality came to mind as I watched Chicago Opera Theater’s concert distillation of “Carmen,” a novel experience that might be described as weird, intriguing and notably short.

It had been some 19 months since I was last in an enclosed theater, in this case the Harris. But here we all were on Sept. 16, a reunion of deprived souls who had turned out to see, well, we knew not what exactly – a semi-staged “Carmen” starring two mezzo-sopranos, Jamie Barton as the title’s notorious, utterly amoral man-killer and Stephanie Blythe (billed as Blythely Oratonio) in the role of Carmen’s latest victim, the feckless bumpkin of a soldier Don José. Speaking for myself, I was extremely dubious about the idea of a woman manning up, as it were, to fall as credible prey to the sexually irrepressible Carmen. Nor was I encouraged to see Blythe show up in rust-hued facial hair, like some errant bearded lady from the circus.

But my incredulity on that point was quickly overtaken by my amazement at what I heard when Blythe, began to sing: a veritable French tenor voice, true and flexible and thoughtfully expressive. That was the Don José she delivered to the end, highlighted by the pathos of “La fleur que tu m’avais jetée” and consummated in the bitter, mortal facedown with Carmen at the close. 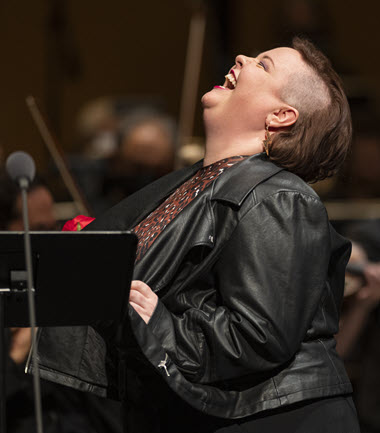 Jamie Barton as Carmen: explicit essence of the rebellious bird.

In purely musical terms, the two mezzo-sopranos sustained a doomed romance at a compelling level. From the start, with her sinuous Habanera, the explicit essence of the rebellious bird, Barton gave a performance to remember. Vocally, she was marvelously changeable, from seductive kitten to baleful harbinger of death. She also invested Carmen with a physical animation and spark that Blythe never managed for Don José, though the latter achieved a high level of engagement through her voice alone.

The whole cast toted scores, which at a certain point passed from mild distraction to simply another peculiar part of this altogether curious enterprise. The curiosities extended from the pragmatic elimination of both the children’s marching chorus and the emergence of the cigarette girls in Act 1 to the parade and pageantry deducted from the final scene. If those omissions, and several other lesser truncations, were understandable in this concert setting, the cumulative effect was still inescapable: “Carmen” telescoped into its peak moments, a sort of highlight reel. What unfolded here should not be confused with Bizet’s opera as an integrated theatrical work, indeed an early example of verismo opera. 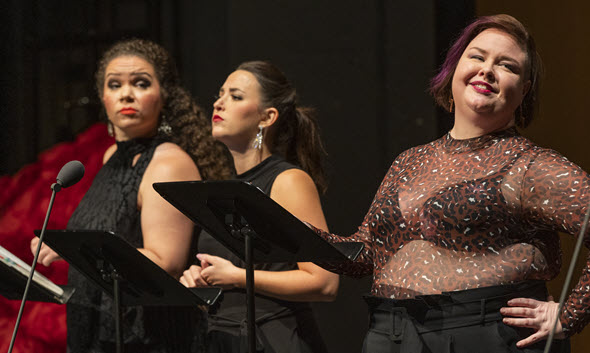 The supporting case was game but variable. As the military commander Zuniga, baritone Brandon Cedel sang with an authority matched by his stage presence of knowing bemusement. As Carmen’s pals Frasquita, and Mercédès, Rachel Blaustein and Leah Dexter combined bright voices with comic flair. Bizet’s brilliant quintet for the three women plus the male brigands Dancaïre and Remendado (sung by Evan Bravos and Lunga Eric Hallam, respectively) was a show-stopper – and no small credit must go to conductor Lidiya Yankovskaya, whose generally brisk tempos kept tension on the musical line and the drama throughout.

Two young singers in deceptively demanding roles – Kimberly E. Jones as Micaëla, Don José’s backcountry sweetheart, and Michael Sumuel as the toreador Escamillo – mostly acquitted themselves well, though both also ran afoul of Bizet’s high extensions. Sumuel has the look and sound of an Escamillo to come; he already has the swagger going.

While the dueling mezzo-sopranos schtick worked surprisingly well from a vocal standpoint, gender-blind casting has its limits, and they were on display here. Don José is not Mozart’s pesky, hormone-charged youth Cherubino in “The Marriage of Figaro,” any more than Carmen is the melancholy Countess. The game being played out between the conscience-stricken soldier and this lusty woman is a deadly one; they are toying with real fire. To subscribe to the opera’s dramatic truth, one must be able to see the fierce and fatal attraction between the gypsy and her latest conquest. What transpired here was paradoxical, the opposite of verismo, a clever gambit – greatest hits from “Carmen,” with a twist. 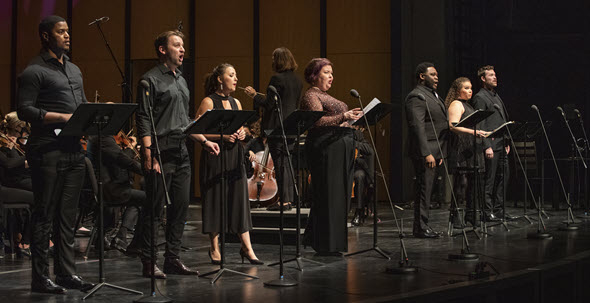