(Sort of) filling stage, but flooding the heart, CSO unfurls a reminder of its grand banners

Review: Something like the full-blown Chicago Symphony captured its familiar glory in a post-pandemic concert that repeats June 6.

The second concert program of the Chicago Symphony Orchestra’s three-week, toe-in-the-water post-pandemic “season” almost took one back to that halcyon time before elbow-bumps replaced hand-shakes.  The concert’s final flourish felt and sounded like the once-and-future CSO: a rousing, blazing, conspicuously virtuosic performance of Zoltán Kodály’s “Dances of Galánta” that even gave the impression of a stage filled with musicians.

Of course, the stage only appeared to present a full force because the musicians were — like the 398 listeners in Orchestra Hall — socially distanced, with only one player to a stand rather than the normal twosome. But that gorgeous, ample sound, at once precise and pliant, was no illusion. 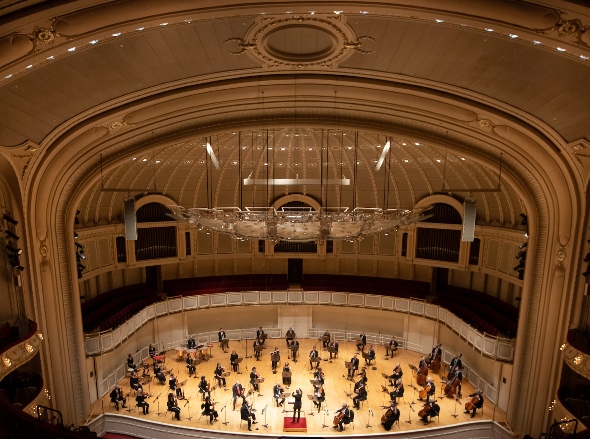 Still at half-strength, because of Covid, the CSO presented a surprisingly full and welcome sound.

At the helm, forging order from Kodály’s teeming colors and impulsive rhythms, was conductor Erina Yashima, a protégée of CSO music director Riccardo Muti. She was the orchestra’s Sir Georg Solti Conducting Apprentice from 2016-2019. Since September 2019, Yashima has served at the Philadelphia Orchestra as assistant to music director Yannick Nézet-Séguin. 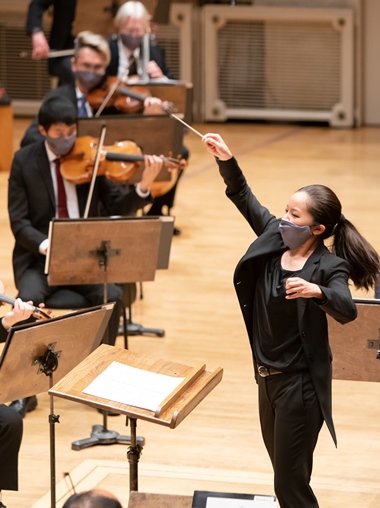 Kodály’s five-part, continuously flowing dance suite is based on folk music of Galánta (now part of Slovakia), where the Hungarian composer lived for several years. In its roots in Gypsy music, its recurring two-part design and its sheer brilliance, Kodály’s suite is a direct descendant of Liszt’s Hungarian dances. Yashima showed a persuasive flair for the music, indulging the languor of slow episodes and just letting the orchestra rip through that alter-personality of each dance. Principal clarinet Stephen Williamson brought winning panache to his many moments in the spotlight.

Yashima’s central offering in this 60-minute program, Schubert’s Symphony No. 5 in B-flat, was more problematic. It was hard to find a connection between her extensive association with Muti and this rather four-square and ponderous perspective on Schubert.

The conductor seemed bent on pressing this buoyant, essentially Mozartian music into the grander mold of Schubert’s “Great”  C major Symphony. Slow tempos robbed the work of its lift, just as a rather stolid approach to rhythm stifled forward motion. It was a curious thing to hear clear, burnished playing from the orchestra delivering so little reward.

The program opened with two charming Novelettes by Samuel Coleridge-Taylor (1875-1912), a British composer of mixed race born to an English woman and a West African man. Coleridge-Taylor’s music enjoyed considerable popularity in England before his death at age 37 from pneumonia. The two selected Novelettes — in A minor, Op. 52, No. 3, and D major, Op. 52, No. 4 — made a dramatic progression from the airy directness of the first to the darker thrust of the second. Adroitly shaped and skillfully orchestrated, the two pieces put one in mind of Dvořák ‘s open-hearted serenades, and Yashima drew sympathetic playing from a chamber-size ensemble.

Mid-program came music of New York composer Jessie Montgomery, who becomes the Chicago Symphony’s  next composer in residence, effective in September. Originally written for string quintet, Montgomery’s “Strum” unfolds as a rhapsodic narrative that begins with pizzicato fireworks and progresses through layerings of rhythms and themes edged with the inflections of dance as well as folk motifs, ending in a sort of joyous tumult. The witty, smartly elaborated piece drew edge-of-the-seat playing from the CSO. 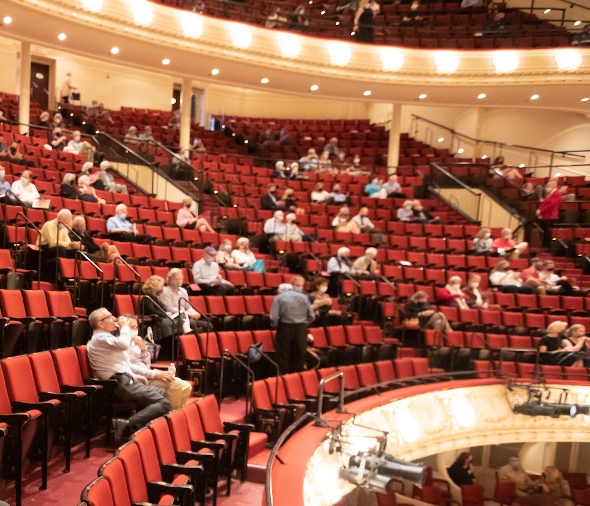 Health regulations limited seating and concert length. But it was an appreciative crowd.