In a timeout from the Beethoven symphonies, three musicians illuminate the inner composer 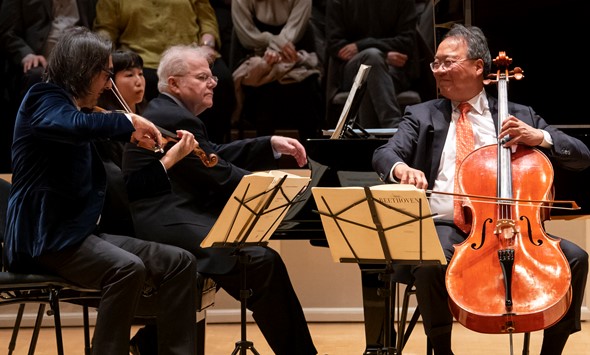 It’s remarkable how, at the midpoint of Riccardo Muti’s roundly rewarding season-long cycle through Beethoven’s nine symphonies with the Chicago Symphony Orchestra, a concert of three Beethoven piano trios could leave one wishing for nothing more grand or personal or profound.

I daresay that sentiment was shared by many another listener in an audience that filled Orchestra Hall to overflowing for the March 2 performance by pianist Emanuel Ax, violinist Leonidas Kavakos and cellist Yo-Yo Ma. Not only was the choir loft packed, but the stage as well – nearly up to the elbows of the three virtuosos who delivered one of the peak moments of this season or indeed of any season in memory.

Beethoven’s seven numbered piano trios – sundry other pieces for piano, violin and cello bring the nominal total to 12 – reach across his career from his first published work (literally his Op. 1) to the threshold of his “late” period: an arc that commences before the earliest string quartets though it also ends just before the late quartets begin. 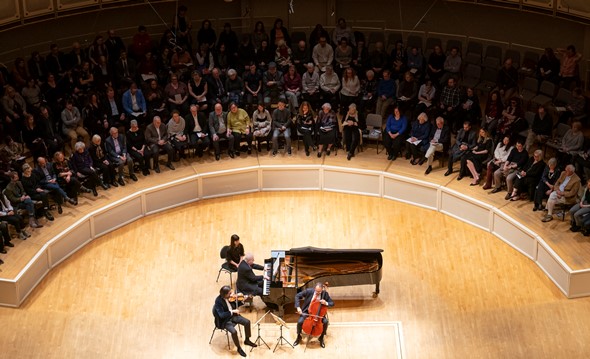 Seating for the overflow audience extended deep onto the stage at Orchestra Hall.

What’s special about the piano trios to consider in this 250th anniversary celebration of Beethoven’s birth is that he wrote the piano parts for himself to play, and did so right through the last of them – even as his hearing declined to the point where his once celebrated virtuosity had faded to a sorry shadow of itself. But in his head, he knew, he heard. And generations of pianists have allowed the world to glimpse the inner art of this towering musical thinker.

Beethoven was barely into his twenties, not long in Vienna and already a keyboard sensation, when he wrote the three piano trios of Op. 1. Ax, Kavakos and Ma played No. 3 in C minor, a dramatic key that would later charge the Third Piano Concerto and Fifth Symphony among other works. Here, the three musicians, displaying a technical unity and cohesion of spirit that belied the separateness of their stellar careers, caught both the young Beethoven’s confident invention and his manifest absorption of his great exemplars Mozart and Haydn.

Certainly in Beethoven’s case, it’s not for nothing that the form is casually referred to as piano trio. The keyboard is primus inter pares, and Ax led by example whether sparkling, lyrical or introspective – qualities that all gave shape and substance to the concert’s second offering, the Piano Trio in E-flat, Op. 70, No. 2. 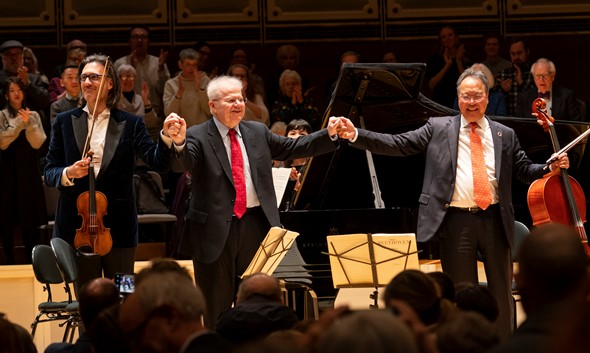 Applause for a summation of the art of music as Beethoven understood it and commanded it.

When conversation turns to the sublimity of Beethoven’s late works, usually the string quartets or piano sonatas, the Piano Trio in B-flat, Op. 97 (“Archduke”) surely requires place in that discourse. Grand-scaled, as rigorous as it is majestic and radiant, the “Archduke” Trio is a mountain top, if not a mountain unto itself. In the hands of these three musicians, Beethoven’s last piano trio – and the last work he played in public – became a testament of transcendence, mind and will and vision prevailing over corporeal frailty.

Here, too, Ax set the tone with a broadly paced opening roulade, something between Schubertian song and Homeric proposition: We were about to hear the narrative of a marvelous journey. Its playing out was a profusion of delights and revelations, movement by movement a summation of the art of music as Beethoven understood it and commanded it. The scherzo abounded in witty byplay; the slow movement’s variations took one to that singular place in Beethoven where heart meets intellect; the finale was all impish merriment.

And there it was, a concert program that perhaps couldn’t be topped – until moments later, amid the roaring ovation, when it was: by an expansive turn through the Adagio from Beethoven’s Piano Trio in B-flat, Op. 11. Singing, serene, assured, it might have been written years later than it was, by a composer age 27. If this anniversary year is teaching us anything about Beethoven, it is the fullness of his genius, which sprang from seed to flower, as if with the first spring rain.