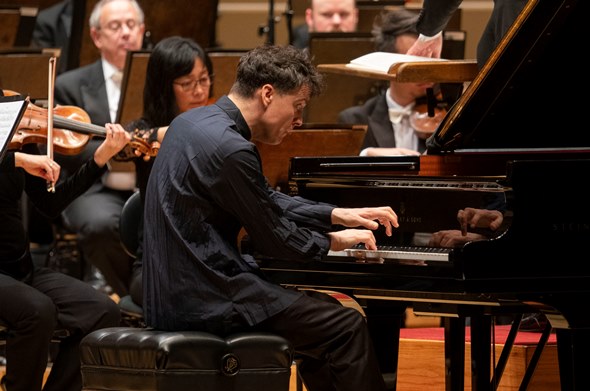 It was not perhaps the same bounty that surrounded the world premiere of Beethoven’s Fourth Piano Concerto in 1808, an evening that also included the premieres of the Fifth and Sixth Symphonies and the “Choral Fantasy.” The composer was the pianist on that night in Vienna. The mind reels.

Still, at this juncture in the Chicago Symphony Orchestra’s season-long celebration of Beethoven’s 250th year, it felt like a generous opportunity indeed to hear both the Fourth Piano Concerto and the First on the same program, with the excellent and roundly Beethoven-tested pianist Paul Lewis as soloist and Andrew Davis on the podium. 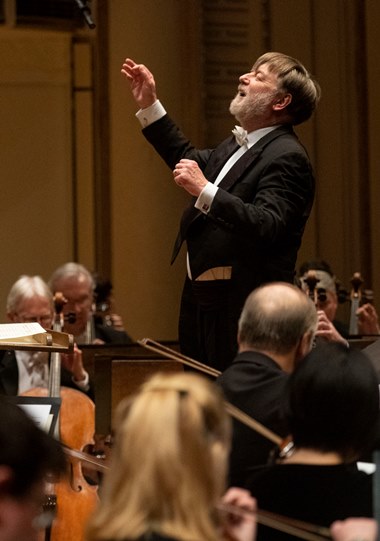 As any music lover who’s been around the block with the Beethoven piano concertos knows very well, what is in the books as his Piano Concerto No. 1 in C major is not, in fact, the first he wrote. Beethoven composed what became engraved as his Piano Concerto No. 2 in B-flat in 1793, two years before the C major. But he submitted them together to his publisher, who willy-nilly inverted their numbering and, well, there you have it.

I bring up this small historical point because it is not incidental, especially when the C major Concerto is placed side by side with the sublime Piano Concerto No. 4 in G. Its evident Mozartean ancestry notwithstanding, in terms of invention, imagination and sheer bravura spirit, the C major Concerto is a more accomplished work than its actual predecessor, and a clear indicator of what was already special about Beethoven at age 25. Its charms beguiled the ear even in this direct comparison with the Fourth.

In the C major Concerto, Beethoven followed Mozart’s practice of holding the piano in abeyance while setting out his first musical ideas in the orchestra. There’s a true symphonic bearing to the work, and Davis, who is music director of Lyric Opera of Chicago and a seasoned conductor of orchestras around the world, indulged the concerto’s grand scheme at some leisure before becoming Lewis’ keenly attuned collaborator.

The English pianist made sparkling work of Beethoven’s sunny music with a performance as buoyant and graceful as it was technically assured. He also seized upon the opening movement’s formidable cadenza for a display of outright virtuosity – where Beethoven certainly meant to showcase his own celebrated keyboard prowess.

At the top of this review, I mentioned bounty. How’s this for bounty: As a work of Beethoven’s “middle period,” the Fourth Piano Concerto, Op. 58, falls within a sequence of published pieces that includes the Piano Sonata in C (“Waldstein”), Op. 53; Symphony No. 3 (“Eroica”), Op. 55; Piano Sonata in F minor (“Appassionata”), Op. 57, and the three String Quartets (“Razumovsky”), Op. 59.

The Fourth Piano Concerto ended in a romp, brilliant and unfettered.

In a sense, as chamber music writ large, the Fourth Piano Concerto expresses all of the above. It is at once intensely personal, highly dramatic and quintessentially pianistic. Which might sum up the performance offered by Davis and Lewis and the Chicago virtuosi.

Lewis’ characteristic lightness of touch was matched by the consummate finesse of the CSO strings and winds. Perhaps the highlight of the evening was Lewis’ soulful immersion into the opening movement’s majestic cadenza, here a veritable Shakespearean soliloquy of riveting concentration and depth. In the slow movement’s famous dialogue between piano and strings, the former venturing its gentle song only to be shouted down as if by some darkling chorus, Davis shaped a dramatic scena that was opera without words: pianist responding with unwavering sweetness to strings that ultimately relented from their ominous threats.

The finale was a romp, brilliant and unfettered in the piano, the orchestra sweeping all before it in a show of unbuttoned enthusiasm.

Davis prefaced the concertos with short essays by Michael Tippett (1905-1998), the conductor’s’ elder British compatriot: the “Little Music” for strings and the “Praeludium” for brass, bells and percussion. The first recalled the plummy opulence and antique warmth of Vaughan Williams’ “Tallis” Fantasy; the “Praeludium,” clangorous and jagged and cryptic, gave the impression of something more rewarding to perform than to take in.