‘Death Tax’ at Redtwist: Everyone has an angle and all converge at bedside of a dying woman 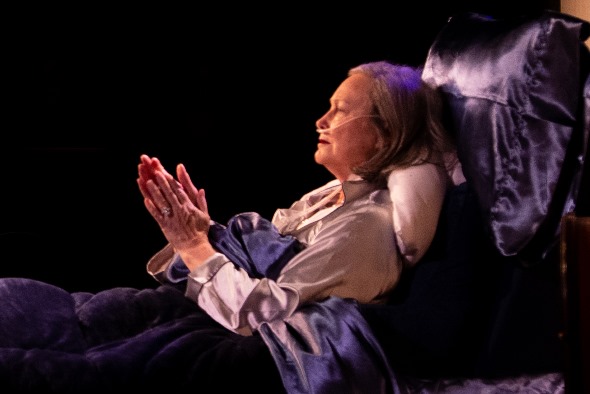 Maxine (Georgia Buckner) suspects her daughter is conspiring with caregivers to hasten her end in “Death Tax.” She may be right. (Tom McGrath photos)

Lucas Hnath’s dark, wry and bitter play “Death Tax” unfolds like a recitation of humankind’s less savory qualities. Duplicity probably tops the list here, but there’s also ample place for avarice, covetousness, vanity and exploitative guilt. Remarkably enough, this brilliant 90-minute descent into the lower depths of human behavior is as fascinating as it is dismaying – and it’s imbued with visceral truth by a wholly immersed, intimate ensemble at Redtwist Theatre.

It’s hard to know when anyone is telling the truth in “Death Tax.” The time is December 2010. Elderly Maxine, bedridden in a maximum care facility and likely to die soon, believes her daughter is paying her caregivers to make sure she expires before Jan. 1 when the federal estate tax – the so-called “death tax” – will rise steeply. 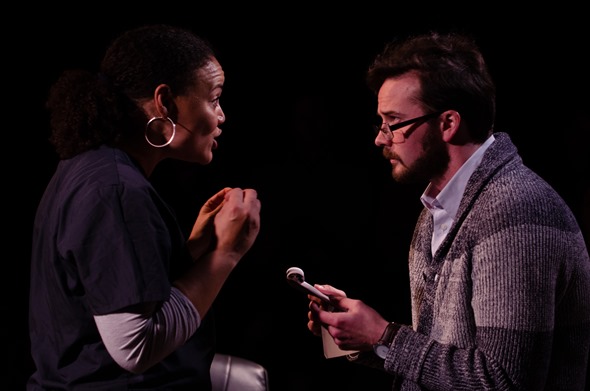 Maxine (played with an expansive sense of entitlement and self-preservation by Georgia Buckner) is well off. She’s also as plain-spoken as she is cynical. She confronts one of her minders, the Haitian immigrant Tina, with a direct accusation that she’s in cahoots with Maxine’s daughter to hasten her end. She makes Tina (good-hearted, almost demure but also fearful in the person of Brooke Reams) a counter-offer.

Tina, who says she got religion and turned from a nasty lifestyle after the birth of her son eight years before, decides to play the game. But games do not go unnoticed, and Tina finds herself suddenly in hot water with the nursing home’s manager Todd, who is himself a piece of work. Todd (the credibly mincing, mousy, anxious Alex Ireys) and Tina have some recent history together. That’s awkward. Then again, maybe Tina’s arrangement with dear old Maxine could work for everyone. The final installment on the deal looks pretty sweet. 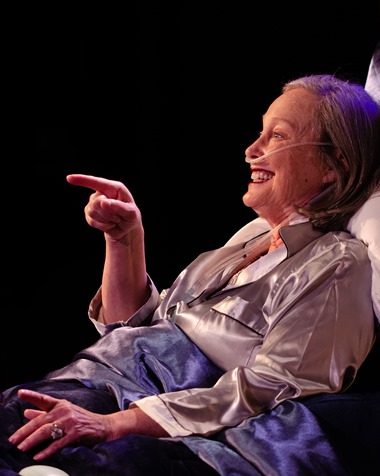 Maxine (Georgia Buckner) is sure she knows what’s what around her.

Alas, the whole business goes south. Hapless Todd thinks he has a very special understanding with Tina, who insists that her only wish in all this is to retrieve her son from the clutches of her bad husband in Haiti and provide the kid with opportunity in America. Much of the play centers on the tension between poor smitten Todd and elusive Tina.

Indeed, one of the two most compelling scenes erupts when Todd misconstrues a gift from Tina as a symbol of everything he’s hoping for. When he’s instantly disillusioned, the enraged man explodes in an emotional rant that fairly rings off the walls of Redtwist’s tiny performance space. Ireys’ embodiment of the wounded, reeling, livid Todd projects raw truth, unvarnished and manifestly unbearable.

The second indelible monologue comes from Maria Stephens as Maxine’s grown, nameless Daughter. Maxine refers to her only as My Daughter – and that, suspiciously. When she shows up to visit her mom, with her unseen young son waiting in the next room, she identifies herself as Maxine’s Daughter. But the Daughter gets quite an unexpected reception – before ever seeing her mother. 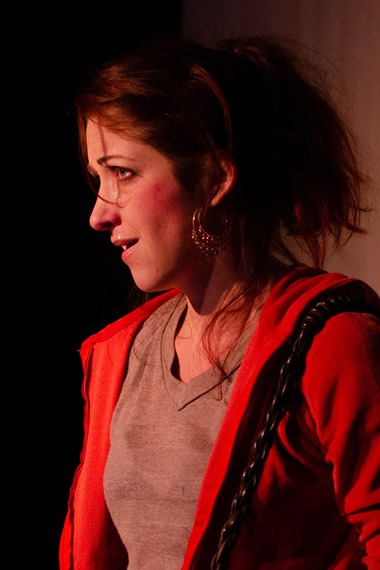 Maria Stephens as the Daughter: Her brilliant speech conjured a graphic image of poverty, alienation and heartbreak.

And that sets off the most protracted, headlong and dazzling speech in the play as Stephens conjures a graphic image of the Daughter’s sorry circumstances of poverty, alienation, heartbreak. In its authenticity and conviction, Stephens cataclysmic outburst was as thrilling as it was painful to behold. This was a purple patch of transcendent acting: the character made convulsing flesh and agonizing soul.

The final scene is an epilogue, the context of which I leave to the playgoer’s discovery. But it belongs to the dying woman, and it was breathtaking (apt phrase) in the vanity, the arrogance, the presumption, the unmitigated self-righteousness that Buckner’s perdurable Maxine summoned with almost leisurely indulgence. The game is not over. Some of the players have changed – same actors, new roles – but the grand dame soldiers on. Death and taxes be damned.

This is the first play I’ve seen at Redtwist under the new artistic leadership of Charlie Marie McGrath, who has succeeded founder Michael Colucci. “Death Tax,” directed by Rinska Carrasco-Prestinary and artfully, efficiently set by designer Kerry Chipman, augurs very well for the continuation of one of the brightest legacies on Chicago’s storefront theater scene.