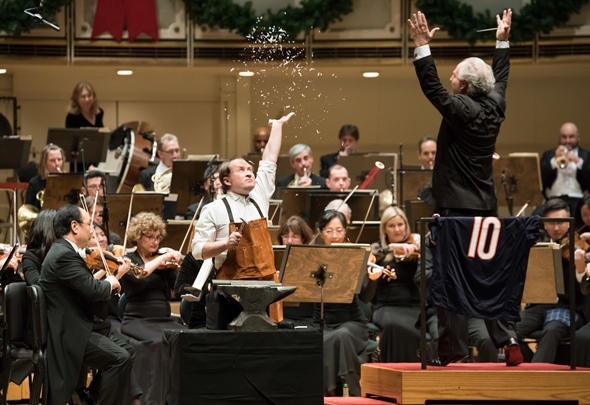 Vadim Karpinos, the CSO’s assistant principal timpani, tosses confetti into the air at the conclusion of a Josef Strauss encore in which he played the anvil — and several gags. Is conductor Manfred Honeck signaling touchdown? (Anne Ryan photos)

The Austrian conductor Manfred Honeck has left some indelible impressions from his appearances with the Chicago Symphony Orchestra. A Schubert “Great” C major Symphony and a Mahler Fifth somehow never stop resonating in mind.

But for anyone on hand at CSO concerts Dec. 12-14, it’s a distinctively Viennese side of Honeck that likely will echo long – and induce a recurring silly smile.

Very much in a holiday vein, specifically in the mode of the Vienna Philharmonic’s annual New Year’s Day concerts at the Musikverein, Honeck led the Chicago Symphony in a delicious, stylish and absolutely riotous romp through half a program of waltzes, polkas and overtures penned by the incomparable Strauss family.

There was a first half to the program, and that was quite something, as well. But dessert first. 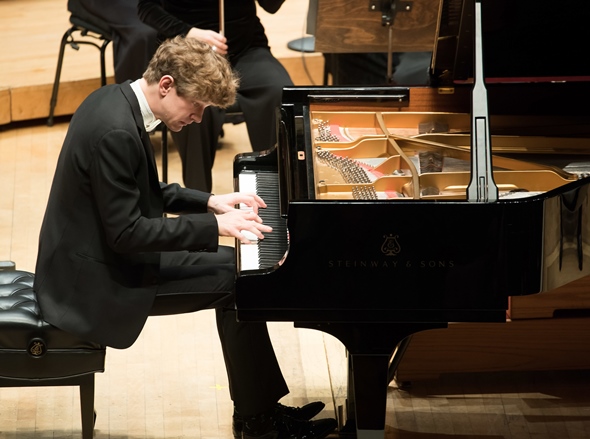 Making his CSO debut in a Mozart concerto, pianist Jan Lisiecki was the complete musician — elegant, poised and authoritative.

While the seemingly endless stream of infectious music that poured from Johann Strauss Sr. (1805-49) and his sons Johann Jr. (1825-99) and Josef (1827-70) still holds a central place in the Viennese heart, only a comparative handful of those works have endured with American audiences. And even those few familiar pieces might be called facsimiles – good copies but not quite the real Viennese thing.

Honeck taught the Chicago Symphony, which in turn showed its audience, the difference between the notes on the page and the subtle and elusive but also defining qualities of native inflection.

You could say it’s all about the conductor’s hips. Or shoulders. The snap of the baton. The languor of the beat. When to accelerate the tempo, or stretch a phrase, or shift an accent. Watching Honeck bring all these elements into play, and hearing the CSO’s alert and game response, made for a half-evening of heady delight. 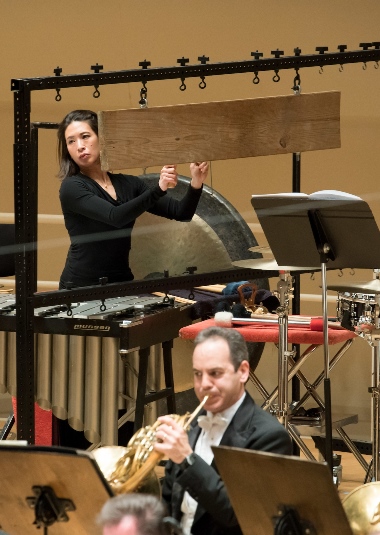 Honeck’s bouquet opened with the Overture to Johann Strauss, Jr.’s “The Gypsy Baron,” itself a potpourri of sensuous waltz and delirious song. What followed was a burst of brief charmers. Josef Strauss’ “The Dragonfly” Polka, with its languid hovering and impulsive flitting, led to a string of gems from the waltz king himself, Johann Strauss, Jr. – the aptly titled “Furioso” Polka, the luxurious “Voices of Spring” Waltz, the exuberant “On the Hunt” Polka, the bizarre mix of nature’s mystery and comical bird calls that punctuate “In Krapfen’s Woods” Polka, and the crackling energy of “Thunder and Lightning” Polka.

The printed program done, Honeck uncorked some serious madness: an encore of Josef Strauss’ “Fireproof” Polka,” for which Vadim Karpinos, the CSO’s assistant principal timpani, appeared on stage wearing a blacksmith’s apron and pushing an anvil, which he would occasionally strike with a hammer. He also packed a bottle of Champagne, from which he poured a portion into a flute – then took a swig from the bottle.

All of this during the polka performance. Karpinos even offered to share the glass – but not the bottle – with concertmaster Robert Chen and Honeck, who passed the libation to assistant principal cello Kenneth Olsen.

In a broader community spirit, the Champagne-packing anvil soloist also produced two football jerseys: a green one bearing the number 12 and the name of Green Bay Packers quarterback Aaron Rodgers. Karpinos wiped his anvil with the jersey, then threw it to the floor. He handed Honeck a navy blue jersey with the number 10 and the name of Chicago Bears quarterback Mitchell Trubisky. The conductor hung that one, bunting-like, over the safety bar on his podium.

The audience ate it up, just as it had delighted in each Viennese bonbon that preceded the wacky encore.

That said, I’m not sure when I’ve heard an audience go bonkers for a Mozart piano concerto quite the way it did after the 24-year-old Canadian pianist Jan Lisiecki made his CSO debut in Mozart’s Concerto No. 21 in C major. I may have been among those whooping. 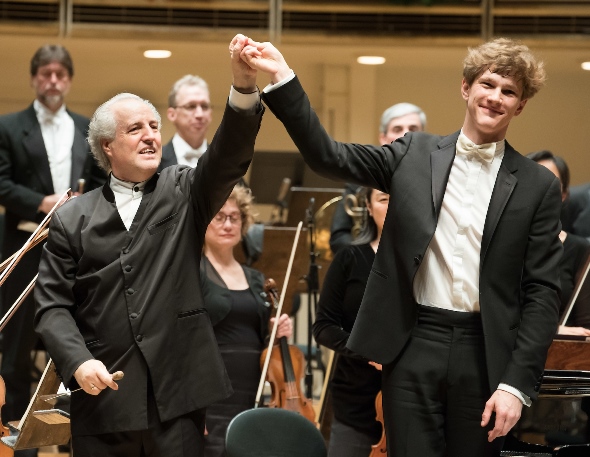 In all matters of musicianship, technique, poise, finesse and sheer authority, Lisiecki is the complete pianist. This was Mozart playing of impeccable grace, fluency and precision – precision not just of notes, but of weight, balance, phrasing. The audience’s huge ovation elicited an encore of Chopin’s Nocturne in C-sharp minor, Op. Posth. Again one was struck by the pianist’s contemplative depth, his daring restraint, the intrinsic poetry of his playing.

Lisiecki has yet to appear on the Symphony Center Presents piano series, an omission that surely will be amended soon. For that matter, he really must be re-engaged by the CSO asap, to play anything at all.

Honeck’s program opened with the CSO premiere of Mason Bates’ “Resurrexit,” a 10-minute orchestral evocation of Christ’s death and resurrection. Bates is a former composer in residence with the Chicago Symphony.

Essentially a tone poem, “Resurrexit” offers an eloquent figurative narration of events, from an opening scene painted in Middle Eastern accents. It is tonal, immediately and powerfully engaging and lavish in its artful, imaginative orchestral palette. If the work speaks more of Easter than of Christmastide, it is nonetheless spiritually compelling at this season and was as warmly received as it was beautifully played.