CSO concert program drifts into a time warp: Music once so Now has come to feel so Then 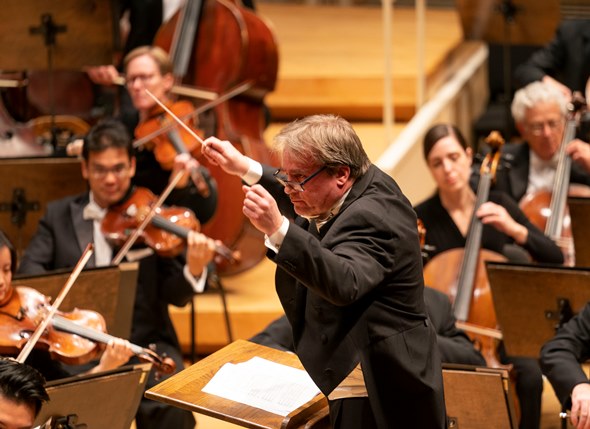 Listening to Henryk Wieniawski’s 1853 Violin Concerto No. 1 in a performance Dec. 6 by the Chicago Symphony Orchestra with conductor John Storgårds and soloist Ray Chen, I was put forcibly in mind of the previous week’s CSO-sponsored MusicNOW concert. And, oddly enough, of Sophocles’ “Oedipus Rex,” just concluded at Court Theatre.

The Wieniawski concerto is so MusicTHEN. The composer was himself a celebrated virtuoso in the mold of Paganini and the toast of Europe through the middle decades of the 19th century. His Violin Concerto No. 1 had never before been performed on a Chicago Symphony subscription program. The question that flooded my thoughts as Chen commandingly, almost effortlessly, subdued the work’s profusion of technical challenges was: Why now? 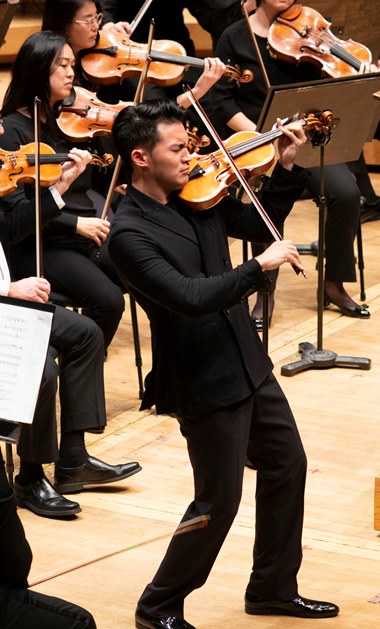 Violinist Ray Chen was commanding in the Wieniawski concerto.

“Oedipus Rex” poked its head up through that wash of puzzlement in ironic comparison. Sophocles’ play dates from roughly 2,500 years ago. And yet it seems so fresh and, never mind relevant, urgent. It was the Wieniawski concerto, written a century and a half ago, that struck me as antiquarian.

Quaint, actually. Except for a slow movement marked by lyrical, lingering reflection, the concerto is little more than a dated exhibition of virtuosic excess – warmed over Paganini, full of tricks and flourishes that left an old world gobsmacked. But that great filter time has largely purged Wieniawski’s music, for the inscrutable reasons of cultural evolution. There are a slew of marvelous concertos – by Britten, Walton, Berg, Schoenberg, among the rest – that might be slotted into the precious opportunities of concert presentation.

Chen, who is not related to CSO concertmaster Robert Chen, played impeccably. But symphony orchestras in the 21st century really do need to be minding their usefulness – curating, as it were, their very existence. The likes of the Wieniawski is hardly the stuff of long-term nourishment.

Happily, Storgårds’ program also offered a profoundly considered perspective on Tchaikovsky’s Symphony No. 4 in F minor, a work that suffers frequently from performances that are fast, loud and superficial. Storgårds’ illuminating approach effectively restored the Fourth Symphony’s grace, elegance and beauty without sacrificing its fetching energy and brilliance.

The Finnish conductor elicited ravishing colors from the CSO woodwinds while keeping Tchaikovsky’s rich tapestry of voices in perfect balance. In the grand dramatic framework of the opening movement and in the charged spirit of the finale, the CSO vaunted brasses shone without obliterating the wealth of countering detail amid the winds and strings. 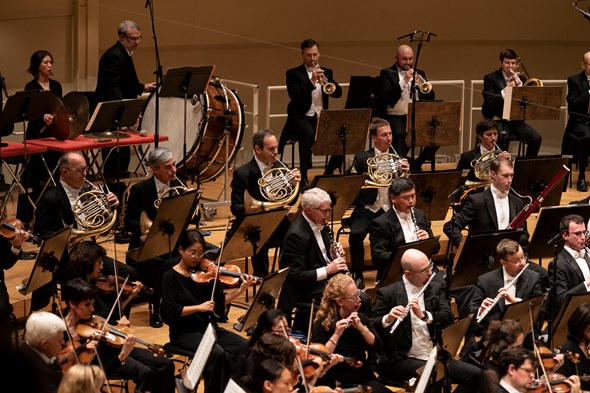 And just as burnished string sound buoyed an eloquent, expansive slow movement, the scherzo flew on the gossamer wings of plucked strings cast against brightly piping winds. Storgårds also injected a bit of theater: After taking clear pauses after the first and second movements, with little more than a heartbeat after the scherzo, he unleashed the shocking sonic burst that launches the finale. And so commenced an orchestra rocket-ride to the finish line.

The program opened on the radiant soundscape of Jennifer Higdon’s “blue cathedral,” a symphony poem of the spirit from 2000 in which the composer memorializes her younger brother. Conceptually, Higdon describes a cathedral of clear glass suspended in blue air – something of a halfway point between earth and infinity. Within this setting, dialogues unfold between brother (clarinet) and sister (flute), or CSO assistant principal clarinet John Bruce Yeh and second flute Emma Gerstein. The 13-minute work, at once sunny and ruminative, received a serene performance well in keeping with its qualities of reflection and aspiration.