‘Mosquitoes’ at Steep: Physics’ great mystery and the subatomic particles that bind sisters 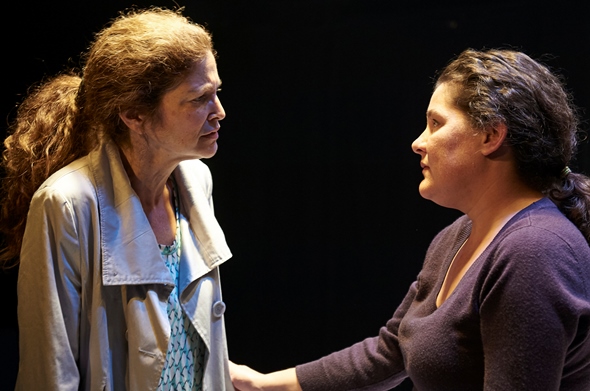 Alice and Jenny are sisters in name only, or so it might seem, in Lucy Kirkwood’s play “Mosquitoes,” now on fascinating exhibit at Steep Theatre. Alice is a physicist, an acorn fallen not far from the twin oaks of her father (deceased) and her mother (still living). Jenny is not a physicist; she probably couldn’t spell the word. Funny, the binding power of blood. 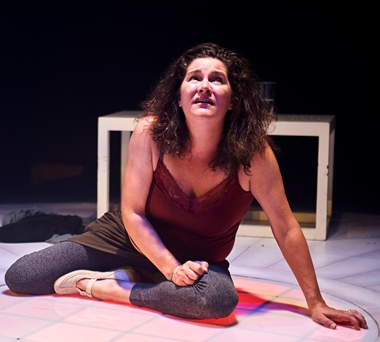 Julia Siple’s performance as simple, unvarnished, nearly feral Jenny is, if quite deceptively, one of the finest dramatic achievements I’ve seen at a Chicago stage this season. It is acting as bold and embracing as it is complex and beautiful. “Mosquitoes,” artfully directed by Jaclynn Jutting, proves to be only metaphorically about the so-called God-particle at its theoretical center; its real core element is this troubled but good and giving woman – and the coalescing force of sisterhood.

Brilliant Alice, played by Cindy Marker with a fetching mix of arch confidence and perilous vulnerability, has followed in her parents’ footsteps in physics. She and her team believe they have cornered the elusive force factor, the infinitesimally small particle, that holds matter together: nature’s glue.

But meanwhile, Alice’s family – very smart adolescent son Luke, mother Karen who complains constantly about how she should have shared the Nobel Prize in physics with her husband, and elliptically orbiting Jenny – could do with a melding agent. 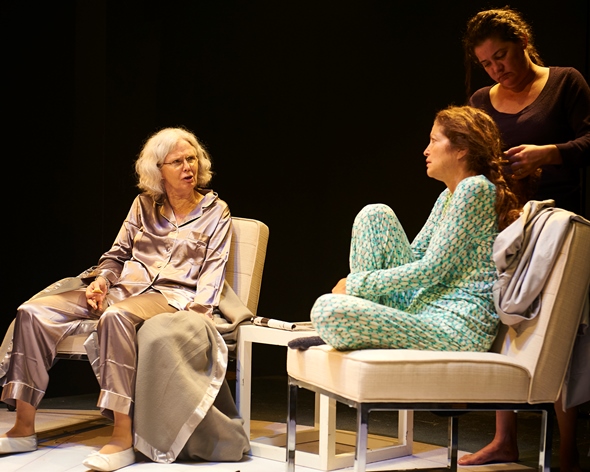 Luke, fiercely intense and explosively withdrawn in the form of Alexander Stuart, has long since retreated into a world he has created for himself on his laptop. To be sure, he can spell physicist; indeed, he may one day redefine the word. For now, he’s struggling to find himself, and he resents his mother’s intrusive expressions of concern.

Alice’s mother (the spunky, defiant Meg Thalken) still imagines herself ruler of the domicile – and did I mention she should have won the Nobel Prize? It’s not hard to imagine what poor Jenny’s life must have been like, growing up as the slow child of two super-smart parents who doted on their likewise phenomenal older daughter. Nothing has changed. At one point, dear old Mom tells Jenny there would no point in trying to explain the topic of conversation to her; she couldn’t possibly comprehend it.

For her part, Jenny long ago shrank from the sidelines of scientific battle. She really doesn’t think very clearly. She’s impulsive, impressionable and essentially reacts to all situations at gut level. But twice she shows what solid micro-particles she’s made of, and both instances also display Siple’s profound immersion in this humane woman. 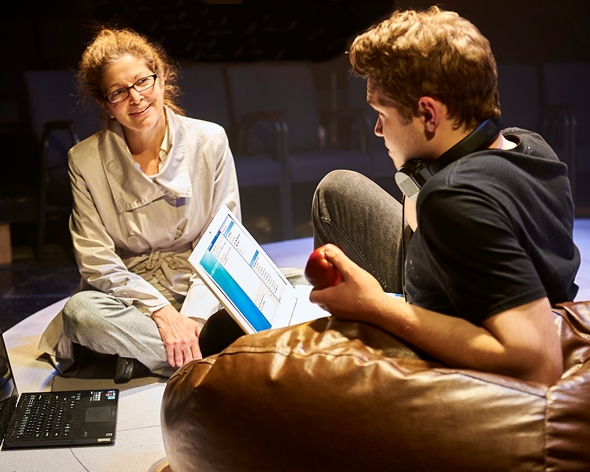 The first occasion is the complete emotional collapse of physicist Alice into a heap of human insufficiency. The second is the real gem. When Luke is traumatized by a very personal photo gone viral, Siple’s earthy Aunt Jenny addresses the crisis in the most direct terms – stunningly plain speech from a woman who knows no other way, but whose sly affection reels the lad back from the brink.

It also cuts the other way, when the chips are down and it seems impetuous Jenny has finally cut Alice too deeply. This time, it is Marker’s proud, wounded Alice who ultimately pushes past her sister’s coarseness and recklessness to offer love when it is needed most, openly and unconditionally.

Two men figure prominently in the narrative. One nudges events along, and the other provides intermittent commentary that summarizes the higher physics at hand while also implying a metaphorical significance of the science. The former is Alice’s current Swiss – not French! — beau Henri, played with elegant understatement by Peter Moore.

The latter is a human incarnation of the aforementioned God-particle, the mysterious mortar that allows matter to have form. In physics parlance, this subatomic bit is called the Higgs boson. Here is where Steep’s enterprise, and one must surmise Jutting’s directorial effort, falls short. What the embodied particle, the Boson, has to say carries great meaning, but on opening night Richard Costes’ speeches were so persistently rushed and swallowed that much was lost. This surely was one time when the most effective acting might have been simply to stand and deliver.