Muti and CSO open with calm Mendelssohn, suppressed cry of pain from Shostakovich 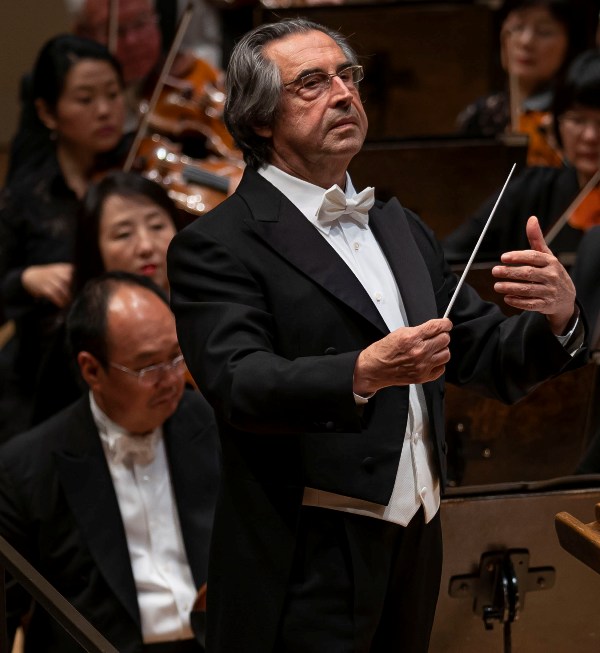 In title and in spirit, Mendelssohn’s overture “Calm Sea and Prosperous Voyage” opens at the bare threshold of sound with unease, reflecting the anxious mood of Goethe’s poem of the same name, about sailors adrift in a sea of deathly stillness, desperate for the wind to catch sail.

Such quiet, glassy perfection is not the easiest sound to achieve for an orchestra in the first utterance of its new concert season after a long vacation break. But it’s the sort of delicate precision work that Riccardo Muti, beginning his tenth year as the Chicago Symphony Orchestra music director, enjoys setting forth as a virtuosic challenge. 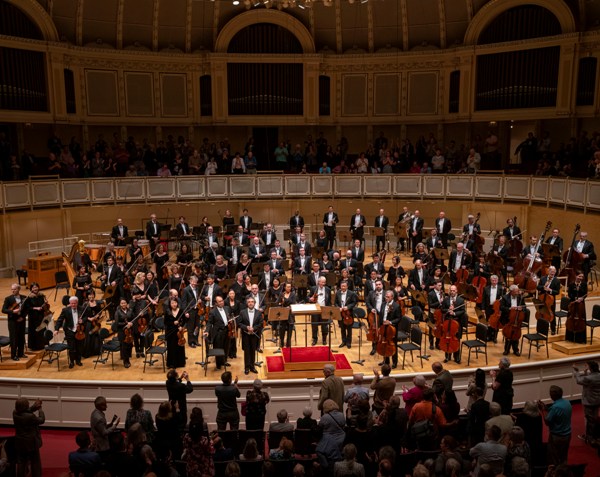 In truth some roughness scarred the initial delicate forays, but Mendelsson’s graceful 13-minute drama (written at age 19) soon took off with the fluttering wisp of a flute arpeggio and ever more energetic woodwind gusts, signaling a spirited sea adventure. The waves of string hand-offs were gorgeous, the whole unhurrried and ever-changing, by often very subtle degrees. 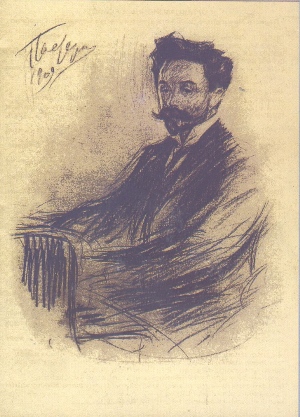 Mendelssohn’s tone poem launched a lively season-opening mix that included an even shorter stunner – “Rêverie,” by the Russian composer Alexander Scriabin. Written in 1898, Scriabin’s supremely confident early miniature, an overlooked jewel, doubtless came as a complete surprise to most in the audience.

It was the first time Chicago Symphony Orchestra had ever performed “Rêverie,” but given Muti’s interest in the boldly individualistic composer, it was inevitable that it should turn up. Scriabin’s audaciously sensual, turn-of-the-century sound world is one of Muti’s specialties. His dramatically potent Philadelphia Orchestra recordings begun in the late 1980s of Scriabin’s orchestral works are still considered the standard.

The two big works on the CSO programs were long lost friends. Time was when the Grieg Piano Concerto was a regular, perhaps too regular, pounding of the keys. It was gone from the CSO’s downtown concerts after 2011. And Shostakovich’s Sixth Symphony, such a contrast to the more popular Fifth, had not been performed by the CSO since 2010. Both benefited from their absences and sounded abundantly fresh. 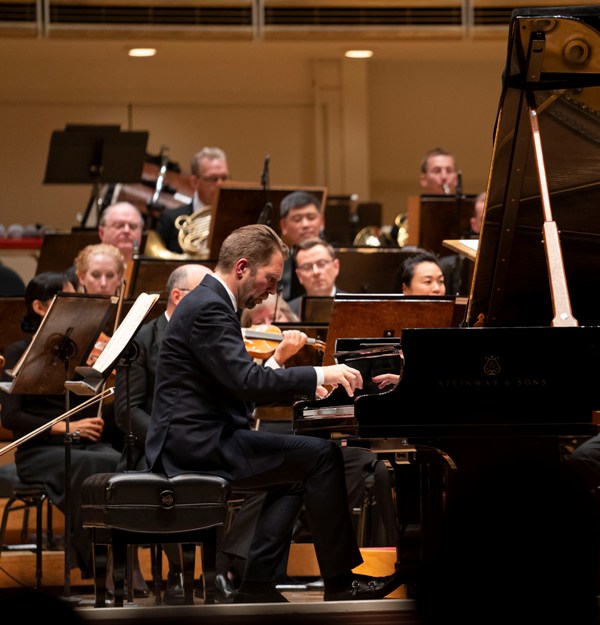 Pianist Leif Ove Andsnes – Grieg’s fellow Norwegian – found bouyancy, lyricism, humor and a new dance-like spirit in the most familiar passages of the Grieg concerto. The cadenza was a clever mix of bravura and poetic delight, which Muti and the orchestra matched with their own light touch.

(The Grieg are to be reprised Sept. 21 along with other popular works at the CSO’s Symphony Ball, probably also with Andsnes’ encore, a charming march (“Gangar”) from Grieg’s Op. 54 suite of lyric pieces, which trods round and round on the keys with a little hitch in the step, a hook syncopation that’s irresistible.)

Shostakovich, lauded in 2000. struggled in life.

As for the Shostakovich Sixth, written in 1939, as terror was mounting in both Europe and Soviet Russia, and by a composer who was in Stalin’s cross-hairs, the work is fraught with alarm and worry that seemed utterly contemporary under Muti’s command. The first movement is a magnificent, vast and deeply personal statement, at once bewildering and mesmerizing. And it’s followed by two movements of sarcastic exuberance and double entendre, also typical of Shostakovich, whose survival doubtless depended on his veiling any direct musical portrait of Stalin’s oppressed Russia.

Muti has now nearly completed his re-stocking of the CSO’s first-chair positions with a new generation of talent, some of the woodwinds quite young, to carry on the CSO’s distinguished tradition. Principal flutist Stefán Ragnar Höskuldsson and principal oboist William Welter were among those who floated outstanding solos of haunting desolation in the Shostakovich first movement, matiching the beautiful work of longtime English horn Scott Hostetler, who was appointed by Bernard Haitink. 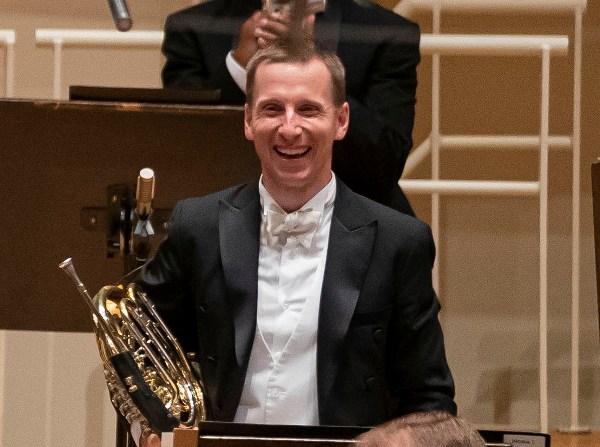 The new principal horn, David Cooper – recently of the Dallas Symphony and the Berlin Philharmonic – startled by announcing himself almost too loudly for Orchestra Hall’s acoustic as he began to play. Once into the Shostakovich, however, Cooper had adjusted. He also dramatically colored a robust French horn choir that sounded splendid and all-powerful. Esteban Batallán, principal trumpet of the Hong Kong Philharmonic, who apparenty has made his way into the final stages of consideration by the CSO, also made a golden impression.

There’s more Shostakovich in the plan for the 2019-20, and wealth of historic performances available on the CSO Radio, a play-on-demand service, quietly nestled into the CSO website, that deserves to be better known. Check the relevant links below. 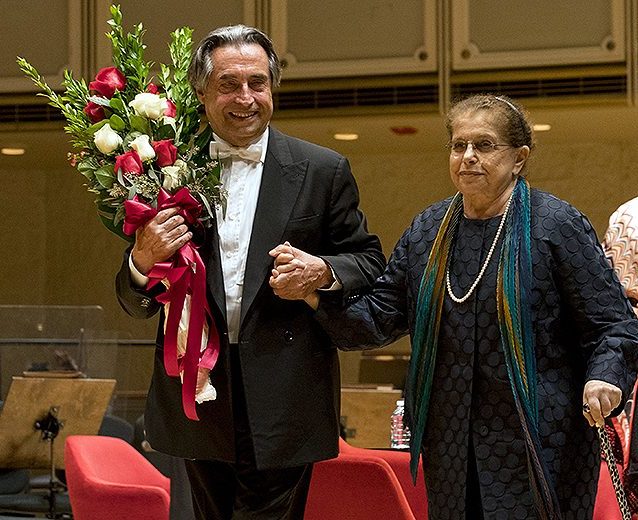 In 2018, Riccardo Muti welcomed Madame Irina Shostakovich to the concert stage prior to performances of the her husband’s “Babi Yar” Symphony.