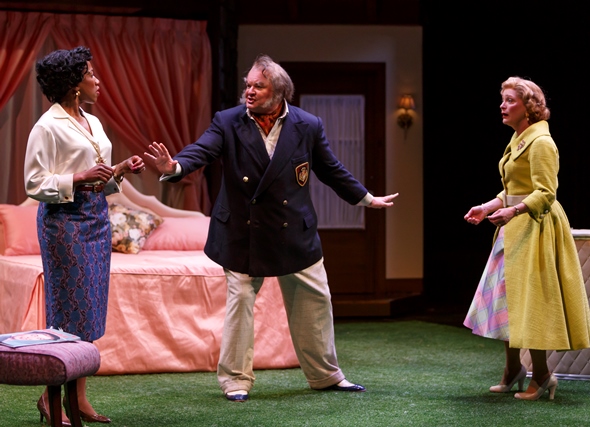 STRATFORD, Ontario – It isn’t exactly a double-header, but it surely is a Wyn-Wyn for the Stratford Festival’s versatile star actor Geraint Wyn Davies. His delightful romps as Shakespeare’s roguish Sir John Falstaff in “The Merry Wives of Windsor” and as Noel Coward’s do-over divorcee in “Private Lives” are reason enough to make the festival trek from just about any distance. 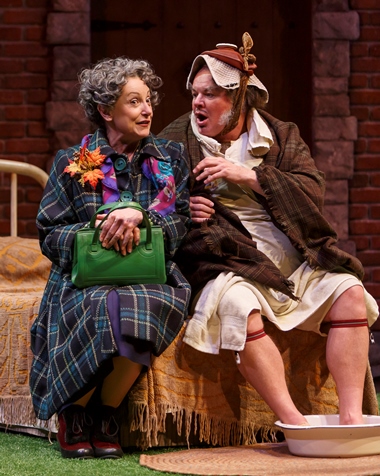 Davies’ turn as the Bard’s fat, lustful, conniving and way over-confident Falstaff is one for the book of theatrical memories. Pillowed out to fit the amplitude of Sir John’s great girth, Davies measures up and then some to the challenge of perhaps the most beloved of all Shakespearean characters – a lout whose forays into misbegotten trysts bring disaster down on his head once, twice, thrice before he (perhaps) learns the lessons of pain and humiliation.

It seems safe to assume that most of the audience knows what’s coming after Sir John sends identical letters intended to seduce two Windsor wives, Mrs. Ford (Sophia Walker) and Mrs. Page (Brigit Wilson). The rotund rascal is going to get his comeuppance. No matter, when Davies’ fleshy fool Falstaff walks into the women’s first trap – and gets dumped from a laundry basket into the Thames – it’s still LOL funny.

But of course, for the vainglorious likes of Sir John, one pummeling isn’t enough when his pride might be redeemed – with access to the husband’s cash the irresistible reward for perseverance. The trick of playing Falstaff is to make his empty valor as credible as his farcical surprises and blind willfulness. Davies plays it all somewhat on the muted side, a bit sly in his insouciance and, in his repeated miseries, restrained, whimpering. 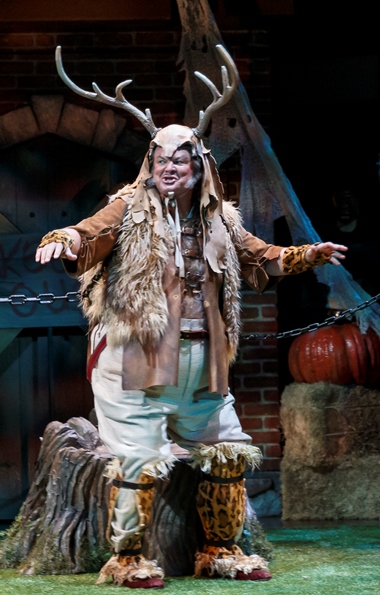 While “Merry Wives” hangs by the appeal of Falstaff, it can and does gain energy from the zest of Mistresses Ford and Page as well as the furious but hapless, repeatedly foiled husband Ford (Graham Abbey). Indeed, this show directed by Antoni Cimolino, the company’s artistic director, offers a village of engaging characters playing out the subplots that are little more than narrative props in Falstaff’s world. Lucy Peacock offers a perky go-between as Mistress Quickly, Ben Carlson makes a sober, studious academic as the community pastor and Gordon S. Miller takes the foppish Dr. Caius to the peak of silliness.

This “Merry Wives” is nominally updated to the mid-1950s. I’m not sure that makes a whit of difference. Once Davies and a solid supporting cast get rolling with Sir John’s high jinx, time and place blur into riot and wit.

The “village” is a good deal smaller in Coward’s perdurable comedy “Private Lives”: just two couples, actually a re-coupling of a former couple, Elyot (Davies) and Amanda (Lucy Peacock), who happen to be spending their second honeymoons at the same French resort. It had been a kiss-and-scratch marriage for Elyot and Amanda, but now they’ve found real happiness in new partners – he with Sybil (Sophia Walker) and she with Victor (Mike Shara). So much for Sybil and Victor.

When Elyot and Amanda discover that fate has brought them to the same place, the old sparks fly again and they split for Paris. But only after a good deal of agonizing, of course. And a pledge to rein in their fiery tempers. Davies and Peacock, two Stratford veterans, bring all their theatrical savvy to this fragile, then flaming, rapprochement. Coward’s dialogue drips with drollery, irony, angst and longing – infectious stuff when pulled off by two such smart and accomplished actors, wisely steered by director Carey Perloff. 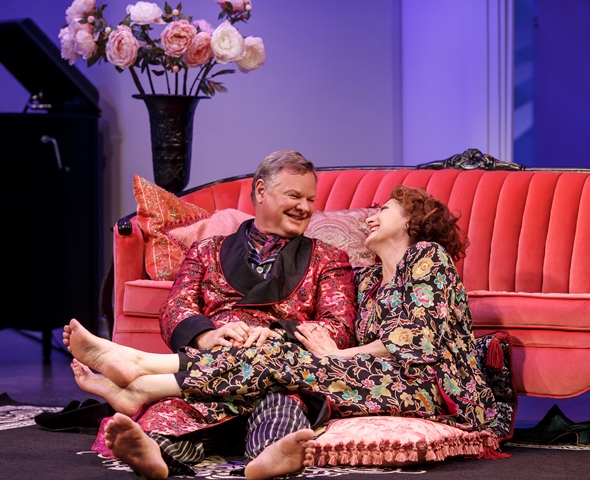 Reunited, their new spouses left behind, Elyot (Geraint Wyn Davies) and Amanda (Lucy Peacock) are happy at last. For the moment.

“Private Lives” doesn’t so much end in happily ever after as it does in a promise of perpetual, indispensable tumult. That’s the augury of Act 2, when the abandoned spouses from Act 1 catch up with Elyot and Amanda in Paris: the love nest where feathers begin to fly almost from the moment the reunited refugees land there. Elyot and Amanda are…happy, wrapped in each other’s arms, content in their renewed togetherness. Until a misunderstood word sets them at each other’s throats again.

It’s a crazy relationship, as the amazed and miffed Sybil and Victor witness first hand when they chase down their new-flown spouses. Walker and Shara are perfect straight foils, normal people, to Coward’s loopy lovers, this outrageous twosome whose only rule – freshly agreed upon – is to honor a safe-word, a stop and desist, whenever tempers flare. But I wouldn’t think of telling the innocent how this one ends, except to say it ends with a spat and two vanishing smiles.