‘If I Forget’ at Victory Gardens: The human comedy in past, present and future imperfect 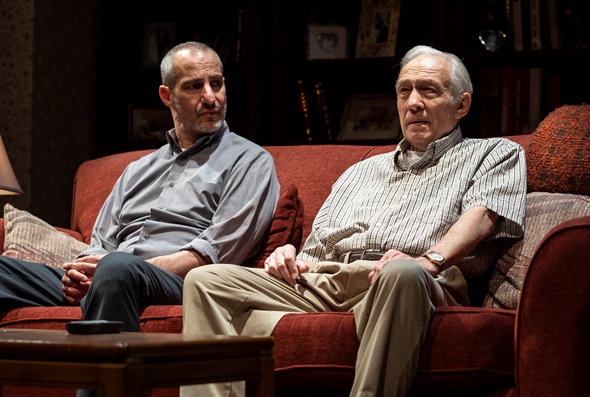 Review: “If I Forget” by Steven Levenson at Victory Gardens Theater through July 7. ★★★★

The ingredients of Steven Levenson’s brutally honest play “If I Forget” are the stuff of human frailty: hubris, folly, hypocrisy, naïveté, denial. All compacted into one dysfunctional family, and sharply etched in a riveting production at Victory Gardens.

Michael, Holly and Sharon Fischer are adult siblings in a Jewish American family. Michael, a university professor of Jewish studies, is married to Ellen, a non-Jew, which is mostly OK with the rest of the family even if it’s in the back of everyone’s mind. Michael and Ellen have come to Washington, D.C., joining Holly and Sharon at the family home after the death of their mother, who has succumbed after a long illness. Their father Lou is just turning 75. A World War II vet who helped to rehabilitate survivors of the concentration camps, he is tired but still mentally alert. 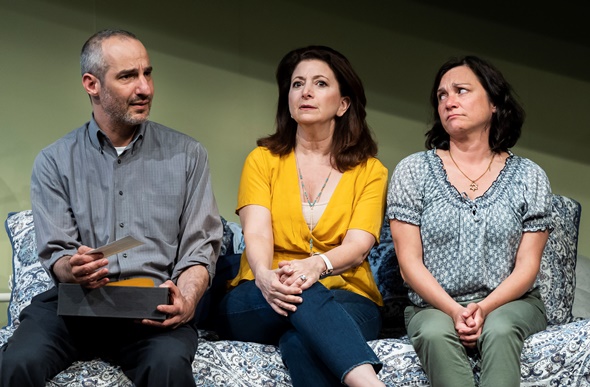 Lou now lives with Holly and her husband Howard, a successful lawyer. Holly doesn’t a job. She certainly doesn’t need to; Howard makes an ample living. They are very well off.

The Fischers have for many years owned a store that once served the Jewish community and then the black populace that progressively replaced the Jews. Now they rent it out to a Latino family. Sharon Fischer, approaching middle age but single, is enamored of a member of the rental family, who happens to be married. That will be a problem. 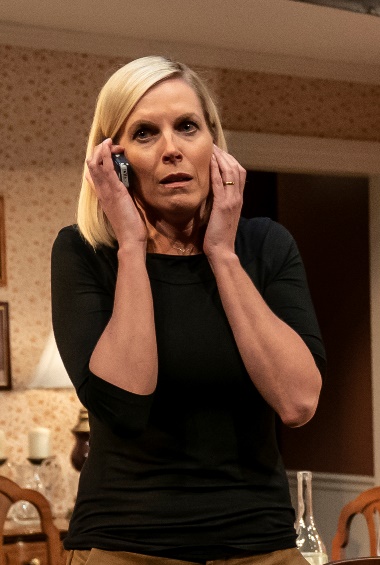 Ellen (Heather Townsend) will not accept the probability that her daughter is mentally ill.

But it almost pales compared with the issue that Jewish cultural scholar Michael brings into their midst. Even as he proclaims his imminent appointment as tenured professor, he also finds himself defending the position he takes in his new book that’s about to be published. In the book, he declares in so many words – but only rhetorically and provocatively, he insists to his family – that it’s time for Jews to put the Holocaust behind them: that the Holocaust has taken on a life of its own and has come to dominate Jewish culture and thinking and, not least, U.S. foreign policy.

It’s true that there’s been some backlash on campus, a petition with maybe 50 names on it, possibly a hundred or so – a possibility that continues to swell. Michael’s father has reacted rather badly to the book, which he has read in manuscript. The older man, who was there at the liberation of the camps, describes to Michael just a little of what he witnessed. It wasn’t theoretical, he says. It was horrific.

Meanwhile, Michael and his wife Ellen are dealing with a serious problem of their own. Their teenage daughter has long shown signs of mental unbalance. She’s in Israel with a group of fellow students. It’s the year 2000, the Palestinian situation is charged and Michael is extremely fearful for their daughter’s safety. But Ellen is convinced the girl, who has tried to kill herself, is just going through a stage and that making this trek to their spiritual motherland is just what she needs.

And from there, things in the Fischer household only get worse. Much worse, and swiftly. 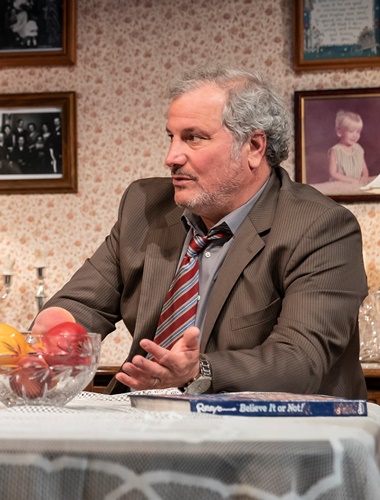 “If I Forget” is fraught with dark humor. It can be very funny. But the further it moves along, the less the darkness is relieved by levity. A very fine, close-knit cast directed by Devon de Mayo sustains a keen edge on the gathering drama. Turn by turn, drollery gives way to bitter irony and just awful reality. As one character began a revelation of his compounded lapse of judgment, at the performance I saw, the audience reacted in a crescendo of audible, visceral dismay with each new bit of information heaped onto the ruinous pile. No one was laughing, so plausible did this unfolding disaster sound.

The sibling portraits are terrific: Daniel Cantor as the high-minded, smugly self-assured Jewish cultural theorist, Gail Shapiro as the comfortable lawyer’s wife who gets it into her head that she will go into business for herself, Elizabeth Lido as the unmarried one, long suffering and disposed to ladle guilt not with a scoop but a shovel. Heather Townsend adds an unnervingly oblivious performance as Ellen, who will not accept that her daughter is mentally ill. And Keith Kupferer’s muted lawyer, ever deferring to his wife and generally keeping a low profile, ends up commanding the stage as only a skilled actor can.

All told, theater well worth the experience. And in the end, calamity yields to a benediction of eternal truth, a balm of grace: This, too, shall pass.