Simone Young makes her CSO podium debut: Was this the stick that led a thousand firsts? 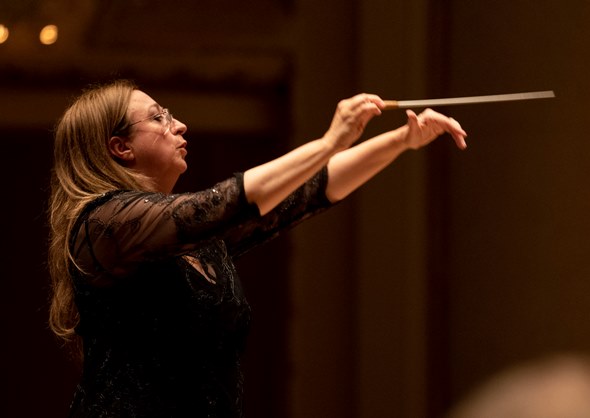 Australian conductor Simone Young, who made her Chicago Symphony debut June 6, was the first woman to lead the Vienna State Opera and the Vienna Philharmonic. (Photos by Todd Rosenberg)

Simone Young almost made her Chicago conducting debut two years ago when she was scheduled to lead the Grant Park Orchestra. The Australian native was already in town, but a family emergency forced her to cancel those concerts and fly back to Sydney. 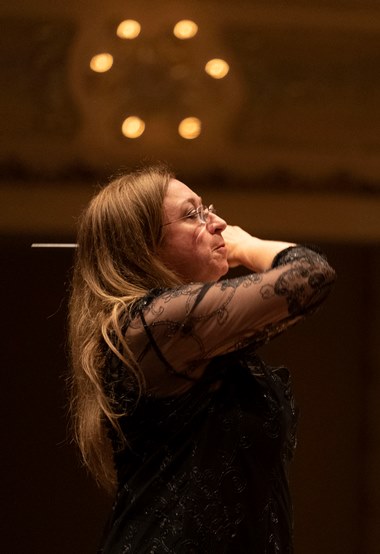 Simone Young came with an impressive reputation in Wagner.

In a classical music world where female conductors remain comparatively rare, Young has broken numerous glass ceilings. She was the first woman to be appointed resident conductor of Opera Australia (1986), first to conduct the Vienna State Opera (1993) and the Vienna Philharmonic (2005) – as well as the first female conductor to record a complete cycle of Bruckner symphonies (2012) and a complete Wagner “Ring” cycle (2016).

Indeed, Young comes with an impressive international resume and reputation as a Wagner specialist. So it seemed that traversing 25 minutes of orchestral music from “Götterdämmerung” with the CSO, also renowned for its Wagner, would be a wondrous combination.

But at least on this occasion, it was not to be. The low brass entrance that opens “Dawn” was scattered and uneven, and the Wagner tubas and French horns of “Siegfried’s Death and Funeral Music” were not always in tune. Moreover, Young was making big and sweeping gestures throughout as if she were cueing singers from a distant opera pit, which is where she has spent much of her career.

Liszt’s “Prometheus,” which opened the concert, began life as an overture to philosopher Johann Gottfried Herder’s “Prometheus Unbound” for the 1850 Herder Centennial. In 1855, Liszt re-orchestrated the overture as No. 5 of his symphonic poems. Amazingly, the piece was receiving its first-ever CSO performance. 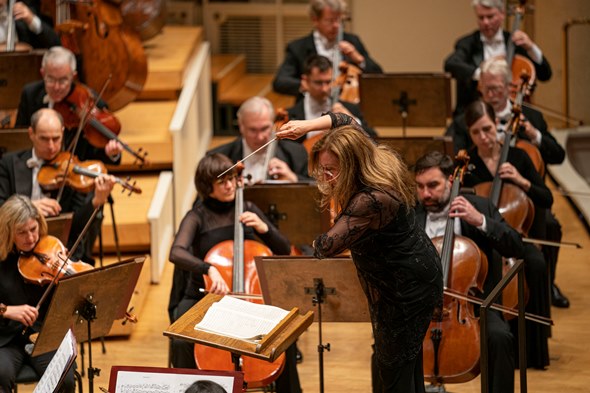 Young clearly has an affinity for the work, and its swirling unison strings were executed with precision while the punctuating brass and winds blared out with abandon. Yet any musical allusions to the ancient narrative of the title character wresting fire away from the gods were glossed over in favor of fast and loud sound, with an  ill-timed solo French horn slip marring the finale.

The second half of the evening was more effective: a traversal of the 1937 Schoenberg orchestration of the Brahms Piano Quartet No. 1 in G minor.

In an adaptation sometimes referred to as Brahms’ Fifth, Schoenberg sought to magnify and morph the Romantic character of piano-centered chamber music into Modernist orchestral fare. This he did while remaining musically true to Brahms, yet at the same time revealing what Schoenberg considered the “progressive” aspects of Brahms by refiltering the music through a new timbral lens.