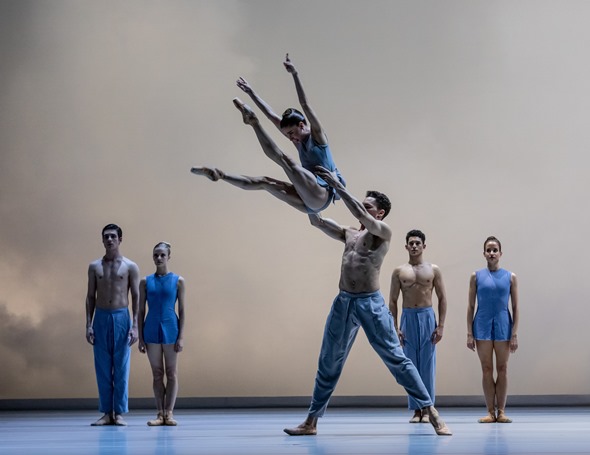 Review: Joffrey Ballet presents works by Andrew McNicols, Andrea Walker and Liam Scarlett at the Auditorium Theatre through May 5.

To conclude a whirlwind season of grand-scale narrative works that included Christopher Wheeldon’s Degas-inspired riff on “Swan Lake” and his Chicago World’s Fair-driven take on “The Nutcracker,” as well as the world premiere of Yuri Possokhov’s cinematic version of “Anna Karenina,” the Joffrey Ballet’s artistic director, Ashley Wheater, decided to shift gears in a most intriguing way.

The result is “Across the Pond,” the umbrella title for a fascinating mixed bill program that showcases the work of three contemporary choreographers, all of whom hail from the nation that these days is best known as Brexit, but which amidst all the chaos clearly has lost neither its enduring passion for ballet nor its flair for moving the art into the 21st century. 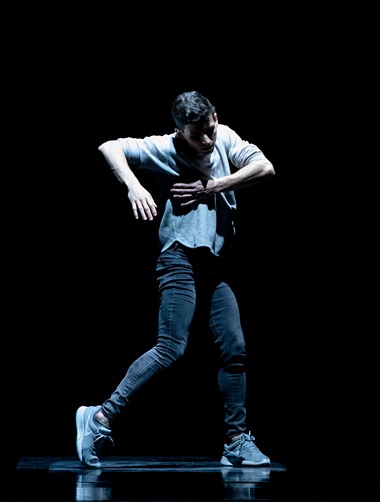 Fernando Duarte in “Home”: the instincts of an extraordinary actor.

“Across the Pond” includes two world premieres, Andrew McNicol’s “Yonder Blue” and Andrea Walker’s “Home,” plus the Joffrey premiere of “Vespertine,” a work created in 2013 for the Norwegian National Ballet by Liam Scarlett, artist in residence of Britain’s Royal Ballet. Wheater also British-bred), has devised the ideal program order for the triumvirate.

McNicol’s “Yonder Blue,” with its subtly haunting score by Peter Greyson impeccably played by the Chicago Philharmonic under the direction of Scott Speck, might best be described as nouveau Balanchine infused with a heightened emotional twist.

The piece, with its fresh, neo-classical patterns for the ensemble, as well as complex partnering and acrobatic lifts, features eight couples. Two of them — Victoria Jaiani and Rory Hohenstein (suggesting a feverishly tense, push-pull relationship) and Amanda  Assucena and Greig Matthews (evoking a more exuberantly heated pairing, with the supremely confident, powerhouse dancing of Assucena especially notable) take the lead. But all of the dancers, top veterans of the company as well as emerging talents, had an opportunity to shine. A male trio featuring Hohenstein, Matthews and Alberto Velazquez was outstanding.

Adding a beautiful, painterly atmospheric effect to McNicol’s work is Jack Mehler’s set and lighting design, which turns the stage into a spare box with ascending and descending curtain walls that suggest mood-shifting skies of blue, gray and dusty pink with a periodic hint of clouds. The women were in simple blue tunics and the bare-chested men in loose gray-blue pants. 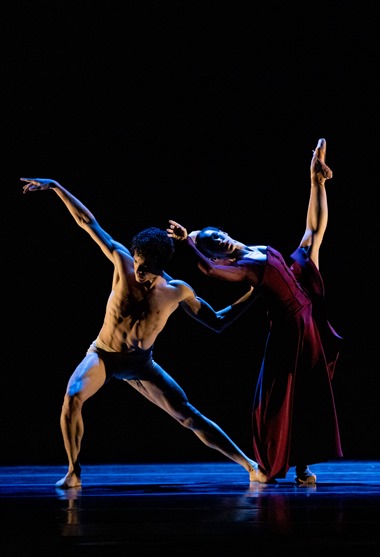 In Liam Scarlett’s “Vespertine,” an aura of darkness and gowns evoking “The Handmaid’s Tale.”

Scarlett’s extravagantly beautiful and dramatic “Vespertine” is set to a ravishing mix of music by Bjarte Eike, a contemporary Norwegian composer and Baroque violinist; John Dowland, the English Renaissance lute master; and 17th-century Italian Baroque masters Arcangelo Corelli and Francesco Gemignani. In one sequence, Scarlett makes powerful use of silence.

“Vespertine” suggests things that take place in the dark, whether prayers or night-blooming flowers. Along with its lush, sculptural, deeply sensual movement, the work is infused with an air of mystery as well as hints of the exaggerated formality of the Baroque period.

The stage is dark except for 13 bejeweled, globe-like chandeliers suspended from the rafters and Michael Hull’s spot lighting. The women are costumed in long, cranberry-colored gowns with cape-like skirts that have a hint of “The Handmaid’s Tale“ about them, designed (and truly “choreographed”) by Scarlett. At one point the ensemble of men arrives in foppish Baroque finery of the same color. In another sequence, the dancers strip down to flesh-colored leotards, recalling a similar hint of eroticism conjured by choreographer Jiri Kylian.

As in “Yonder Blue,” two couples are crucial to the ballet, with Jaiani in top form here, partnered by Velazquez, and the ever commanding and passionate Assucena partnered by the exceptional Barbosa. Highlighting the superb ensemble was the work by Yuka Iwai and Gerberich. 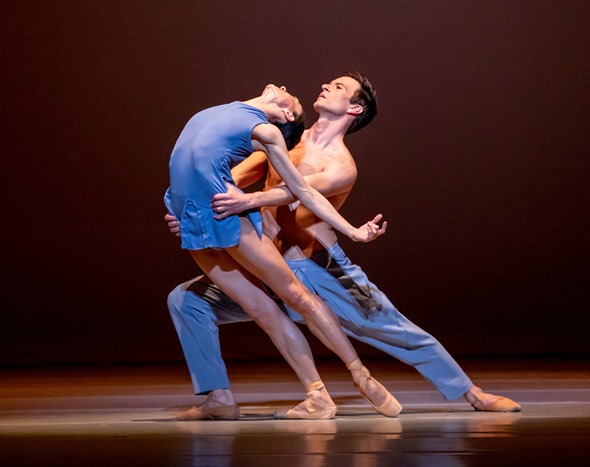 Concluding the program was Walker’s “Home,” an intense, piercingly political work of dance theater starring Fernando Duarte in an altogether remarkable turn as a tormented outsider unable to connect with those in the society in which he finds himself.

It begins with the sounds of schoolchildren reciting the Pledge of Allegiance while an ensemble of 18 “citizens,” hand on their hearts, walks in lockstep, confident in their sense of belonging, or at least going along.

Duarte suggests a young man starved for human interaction, yet unable or unwilling to achieve it. He briefly connects with a girl, but that quickly fizzles. Then comes the towering presence of Fabrice Calmels (in an impressive shift from his usual villainous turns), who reaches out to him and might become a friend, a lover, a mentor. But while the poignant intimacy and eroticism of their interaction suggests Duarte might have found someone who can understand and nurture him, it is not to be. And he continues on, painfully disconnected from the crowds of strangers who encircle him or march past him. 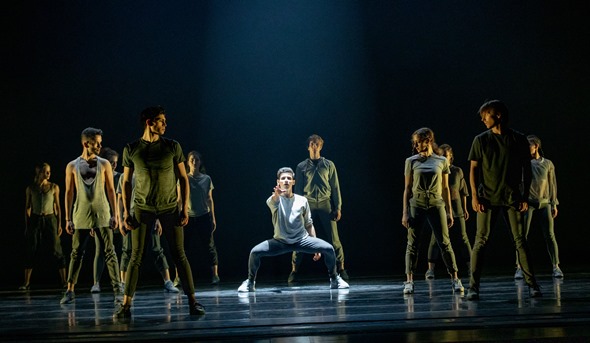 Set to an electronic score by Ross Allchurch, this portrait of physical and emotional alienation clearly has struck a chord with the Joffrey dancers, whose roots span several continents. Duarte’s performance suggests that this gifted dancer also possesses the instincts of an extraordinary actor in a work that left the audience (and only a Britishism might do here) completely gobsmacked.

You might also find yourself wondering whether when, and if, this piece is performed in other countries, a fitting national anthem (for example “God Save the Queen” or “The Marseillaise”) might be substituted for the Pledge of Allegiance. Alienation is not nation-specific.

All three choreographers were in Chicago to take bows with the company at the opening night performance April 24. They looked elated to be “Across the Pond.”