‘How I Learned to Drive’ at Raven: Pretty girl, adoring uncle and secrets of the automobile 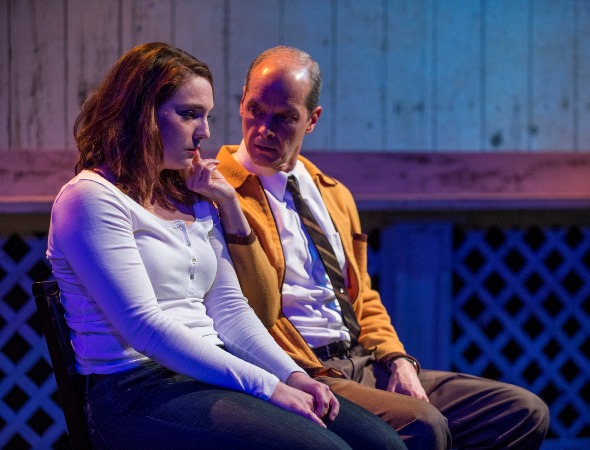 Uncle Peck (Mark Ulrich) loves his young niece Li’l Bit (Eliza Stoughton) and wouldn’t do anything she didn’t want him to do. (Production photos by Michael Brosilow)

Review: “How I Learned to Drive” by Paula Vogel, directed by Cody Estle at Raven Theatre through March 24. ★★★

Li’l Bit was just 11 years old when she got her first driving lesson from her Uncle Peck. He pulled her onto his lap and showed her how to place her hands on the steering wheel.at the 3 o’clock and 9 o’clock positions. Then Uncle Peck placed his hands in roughly the same positions on L’il Bit.

In Paula Vogel’s bruised-memory play “How I Learned to Drive,” the 1998 Pulitzer Prize winner for Drama now on cringe-inducing display at Raven Theatre, Li’l Bit grows to young womanhood in the caring, caressing hands of her devoted Uncle Peck, a pedophile. Truly, Uncle Peck loves Li’l Bit, whose rural upbringing by her aunt and uncle shapes the story we observe from her nudged-along sexual awakening into her first year at college, at age 18. The man has adored the child from her birth, when she popped into the world so tiny that he could literally hold her in the palm of his hand. That’s how Li’l Bit got her name, to put it delicately, though delicacy was hardly an abiding quality at a kitchen table where the child’s rough-cut grandpa and grandma spoke their minds unfiltered and raw.

Eliza Stoughton narrates and inhabits the story as Li’l Bit, recalling in an evocative ebb and flow of emotion, and in jagged jumps back and forth in time, how her uncle made her conversant with the power, the beauty, the independence encapsulated in an automobile. Huge, ever-changing, car-themed billboards serve as chapter headings for Li’l Bit’s account.

Uncle Peck loved cars. He respected them, and he passed all that enthusiasm to his receptive niece. Thus he nuzzled her through her adolescence, gently insinuating himself upon her – insinuating as much as the girl’s emerging comprehension could process. But he never crossed the line, never forced himself on her. That’s why the child never turned from him, or turned him in to his wife, her aunt. This was just Uncle Peck’s way. Over the years, in their frequent outings behind the wheel, just the two of them, he must have told her a hundred times that he would never do anything she didn’t want to do. Usually followed by: Do you want to?

The answer was always no. And that was OK with Uncle Peck. He wanted her to trust him. While Li’l Bit was not his only dalliance with children, she was his life’s joy; he would do anything for her. She said they could continue their secret togetherness under one condition: that he stop drinking. And he did. He just loved having her near him, all to himself, in the car. Li’l Bit (Eliza Stoughton) was 11 years old when she got her first driving lesson from the adoring Uncle Peck (Mark Ulrich).

It’s hard to imagine a more pathetic character than this troubled, creepy man – or a more empathic embodiment than Mark Ulrich offers in a sharply focused performance. Uncle Peck seduces children; we get that drift. We don’t know whether he sets the same firm boundaries in all his pursuits as he does with Li’l Bit. Ulrich’s predator is like a mountain lion that has become fascinated by a particular fawn and will not kill it. Uncle Peck’s obsession with Li’l Bit is all-consuming. He waits for her to volunteer what he so longingly, painfully desires; but she does not. He knows she will, though — knows his infinite patience will be consummated. Ulrich plays this mad anticipation like breathing out and breathing in. Just keep breathing, and one day all will be wonderful beyond imagination.

None of this is to suggest that the fullness of her girlhood spent cozying up with and fending off her uncle has left Li’l Bit unwounded, unscarred. Yet as she looks back on that grotesque betrayal, it is with the comprehension of one who has found a place for the corruption and the hurt.