‘La traviata’ at Lyric Opera of Chicago: Beneath layers of familiarity, a pristine jewel 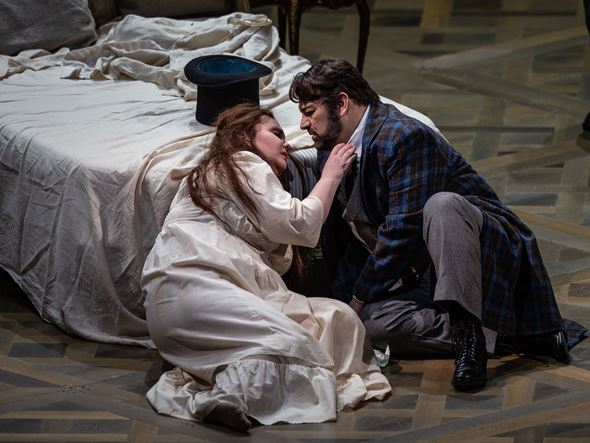 Review: “La traviata” by Giuseppe Verdi, at Lyric Opera of Chicago through March 22. *****

Every opera that gains such enduring popularity as to acquire the epithet “warhorse” was once, well, a colt – exhilarating in its spunky freshness, its beauty undimmed by long familiarity and habitual service. The real marvel of Lyric Opera’s current staging of Verdi’s “La traviata” lies not just in its lustrous surfaces but rather in its surprising depth, in its true and affecting recovery of a splendor beyond – or, more to the point, before – habit. 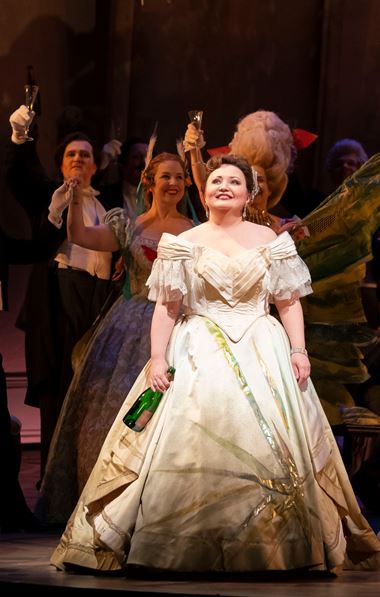 Violetta (Albina Shagimuratova) is ready to refill libations during a drinking toast.

The singing is exquisite by all three of the leads: soprano Albina Shagimuratova as Violetta Valéry, adored courtesan and toast of Paris who paradoxically has never known true love; tenor Giorgio Berrugi as the love-struck Alfredo, who wins Violetta only to see their idyll shattered by cruel circumstance; and baritone Željko Lučić as Alfredo’s father Germont, who fractures the lovers’ bliss to protect his daughter’s prospective marriage from the stain of scandal.

But even before considering the collective vocal achievement, or the skillful acting by all three singers, one must acknowledge the masterful work of American conductor Michael Christie, a former protégé of Daniel Barenboim at the Chicago Symphony Orchestra and music director of the Minnesota Opera from 2012-18. From the opera’s fragile prelude to the Champagne brilliance of the soiree that first fills the stage to the last strains that accompany Violetta’s death, Verdi’s dramatic tapestry flowed from the Lyric Opera Orchestra. Christie led with a consummate sense of both the opera’s instrumental voice and its interplay with the characters before him.

I might have said actors before him. All three principals engage the opera as serious theater, probing physically as well as vocally into the passions, vulnerabilities and urgencies that drive “La traviata” forward. No doubt, the show’s dramatic integrity reflects the invisible hand of director Arin Arbus. 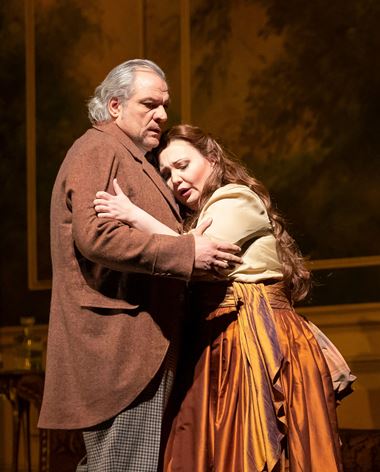 Despite his awful demand, Violetta (Albina Shagimuratova) asks Germont (Željko Lučić) to embrace her as his daughter.

Here, “Traviata” is construed as a memory play. During the prelude, we see Violetta through a scrim, in her final illness, once again dressing for that long-ago party, the magical night when Alfredo came into her life. The scrim rises, the gaily dressed guests converge and her gloomy bedroom becomes – her likewise-gloomy salon. The dingy light and barren walls of the party scene form my one caveat about this production. Violetta soon will be singing about the joy of life: in so bleak a setting?

Then again, Shagimuratova’s light, agile sound would cheer any room. In truth, it’s a powerful voice that she controls with well-honed technique and great musical intelligence. In the exuberance of her party duet with Alfredo, in the poignancy of her submission to Germont’s demand that she leave his son and in the final, hopeless vision she shares with Alfredo of a new day for them, Shagimuratova traced the swell and mortal descent of the ill-starred courtesan.

Berrugi was no less impressive, no less engaging, his arc from exultation to black dismay no less credible. Start to finish, this well-schooled Alfredo matched his Violetta vocally. Indeed, the lovers’ shared triumph stemmed largely from mastery so complete that technical issues were utterly subsumed within the power of the vocal lines. Lučić’s imposing Germont fit right in musically, even as he created a potent foil dramatically – the interloper who crashes the lovers’ happy estate with a peremptory demand that they break it off at once. There was no wheedling, no imploring in Germont’s message: It was an unequivocal demand, and Lučić delivered it with stunning vocal authority. 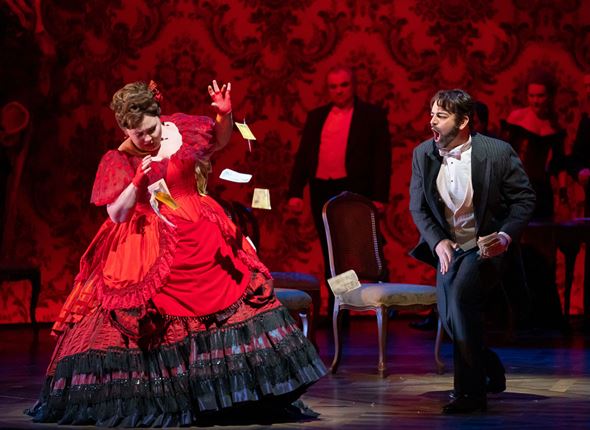 Enraged at Violetta (Albina Shagimuratova) because she has left him, Alfredo (Giorgio Berrugi) humiliates her in a public pummeling with fistfuls of cash.

The opera’s long plunge through the frolic of one last party, and Alfredo’s deplorable behavior, to Violetta’s death felt like a single relentless sweep despite an intermission break. The whole dramatic point of the party – enhanced by the Lyric Opera Chorus’ robust singing – is to provide Alfredo, who believes Violetto has simply left him for the next diversion, the opportunity to humiliate her publicly. It’s always an unnerving moment when the enraged, probably drunk, Alfredo hurls his cash winnings from the gambling table into the face of this apparently faithless woman. But it’s especially mortifying here, as Alfredo extends the insult, pummeling Violetta repeatedly, a fistful of bills at a time. And she, already dying of consumption, swoons to the floor, broken in spirit and heart.

The final scene, Violetta’s death, was a thing of rare beauty in which Shagimuratova seemed to buoy the expiring woman on the sheer strength of a moment’s happiness. If the reunited lovers’ famous duet of empty hope was touching, perhaps even more so was Shagimurtova’s aria in which Violetta gives Alfredo her portrait for remembrance – and as a beatific gift to the young girl he will one day meet. This was transcendent; this felt deeply new.