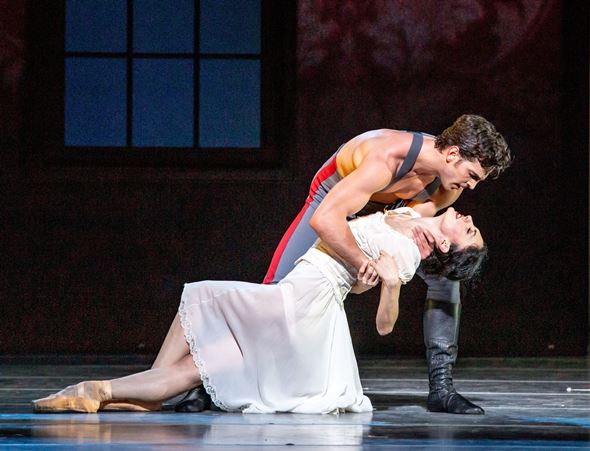 Anna Karenina and Alexey Vronsky plunge into a torrid affair that will bring ruin to her. (Production photos by Cheryl Mann)

The Joffrey Ballet’s world premiere production of “Anna Karenina” is astonishing and thrilling on so many levels, from its concise distillation of Tolstoy’s prodigious novel, choreography that captures the story’s tragic essence and inspired multimedia effects to a superlative musical score. But this ambitious enterprise is first and foremost tremendous theater. 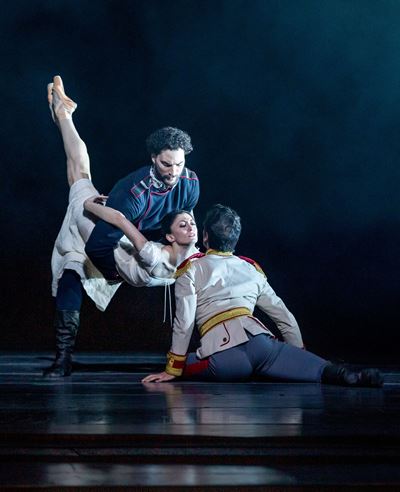 The eternal triangle, in a pas de trois for Karenin, Anna and Vronsky.

Depending on the translation, Tolstoy’s narrative fills nearly a thousand pages. Joffrey’s new ballet, choreographed by Yuri Possokhov to an original score by Ilya Demutsky, spans a scant two hours. Allowing that hard choices and massive cuts had to be made, this stage presentation conveys the emotional heart and psychological turmoil of a story that still seems epic even in its balletic brevity.

Anna Karenina, a member of upper class St. Petersburg society in the 1880s, is the young wife of Alexey Karenin, a government official. They have a little boy. In a chance, fleeting encounter at a railway station, Anna meets the dashing Count Vronsky, and thus begins a passionate, tumultuous affair that soon turns polite society against Anna and ultimately leads her, isolated and distraught, to suicide.

Just as Tolstoy’s novel unfolds in eight episodes, the ballet falls into eight readily trackable scenes plus a prologue of the fateful meeting between Anna and Vronsky. Evocative choreography and precisely expressive dancing combine to keep the narrative line taut while, conveying the lovers’ rapture well as Anna’s inexorable removal to the margins of society.

I saw the Feb. 16 matinee performance with the cast of Amanda Assucena in the title role, Greig Matthews as Vronsky and Temur Suluashvili as Karenin.

Assucena was magnificent, as elegant and effortless as she was convincing in her expression of Anna’s mounting torment. Choreographer Possokhov brings Anna’s desperation to a head in what is essentially a mad scene perhaps reminiscent of the mad scene in Donizetti’s opera “Lucia di Lammermoor,” though I found an even more resonant connection to Ophelia’s pathetic distraction in Shakespeare’s “Hamlet.” Assucena’s immersive dancing showed us a woman imploding under the compound weight of social opprobrium and her nagging suspicion that Vronsky has abandoned her for other women. 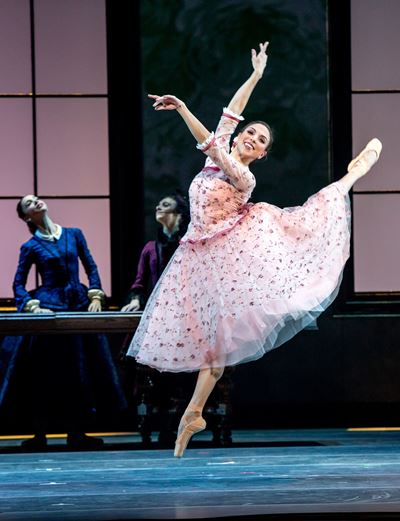 The story’s dramatic nub is crystallized in a pas de trois in which Anna finds herself literally tossed and pulled between her lover and her husband. The first heat of Anna’s affair with Vronsky steams the stage in a physically aggressive scène d’amour. Matthews created a strapping, athletic Vronsky, a self-assured aristocrat whose confident bearing informed every gesture of his graceful dancing.

Central to Tolstoy’s tale is a philosophical subplot involving the good-hearted but shy aristocrat Konstantin Levin, who prefers the quiet life on his rural estate. Early on, Levin (danced by Rory Hohenstein) seeks the hand of the pretty young debutante Kitty (Cara Marie Gary), but she rejects him in hope of landing Vronsky. In the end, Levin and Kitty reconcile, and the book – and this ballet – concludes with a sort of epilogue, after Anna’s death, that celebrates the moral virtues of a simple existence down on the farm. Indeed, a company country dance sets a bright cap to the show – after we’ve watched poor Anna walk into the path of a train.

Ensemble choreography is brilliant, imaginative and handsomely costumed throughout the ballet. Projected images, devised by Finn Ross, accentuate the story and discreetly complement the set designs of Tom Pye, who also created the costumes. David Finn’s painterly lighting takes the entire drama to another level. 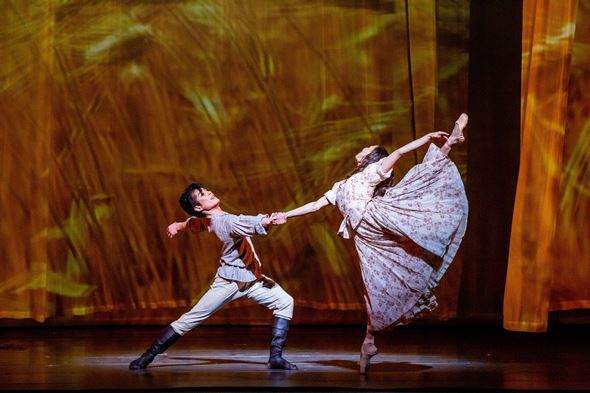 Levin and Kitty find happiness in simplicity, down on the farm.

“Anna Karenina” revels in composer Demutsky’s glorious music, rooted in the distinctive tradition of Russian romanticism. The Chicago Philharmonic, conducted by Michael Moricz, turned in an adroit and colorful performance.

Certainly not to be overlooked is the gorgeous singing of mezzo-soprano Lindsay Metzger, whose three Russian songs heighten the show’s aura of authenticity. Metzger, a recent alumna of the Lyric Opera’s Ryan Center, sang twice from the orchestra pit and a third time – to striking effect – on stage, dressed in chic modern black attire, spike heels and all, in front of Levin’s happy farmers: a contrast as fetching as it was remarkable.