After 12-year absence from CSO, Barenboim returns with ‘My Homeland’ – but not his own 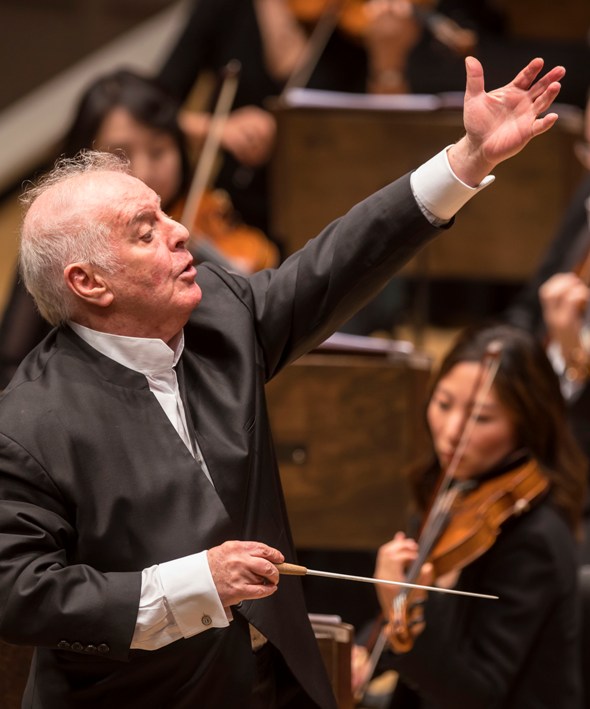 Renewing very old ties, Daniel Barenboim, who first conducted the CSO 48 years ago and became one of its music directors, returned with a baton. (Concert photos: Todd Rosenberg)

No living conductor, not even music director Riccardo Muti, enjoys a longer association with the Chicago Symphony Orchestra than Daniel Barenboim.

It was 48 years ago this month that the Israeli musical polymath, then all of 28, led the CSO for the first time, inexperienced on the podium but clearly eager to spread his wings beyond the piano world he had conquered decades before. 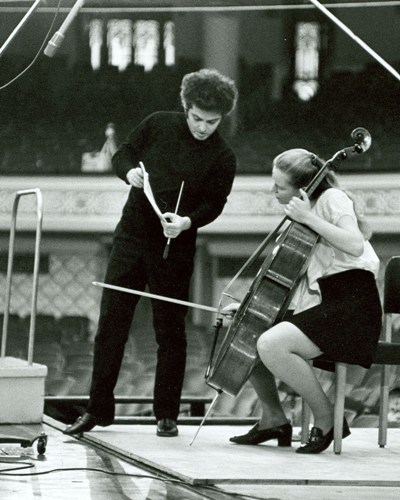 Barenboim and Jacqueline du Pré recorded the Dvořák Cello Concerto with the CSO Nov. 11, 1970, a week after his conducting debut with the ensemble. (Robert M. Lightfoot III photo, Rosenthal Archives)

Numerous guest appearances in Chicago over the ensuing two decades – a crucial formative period for him as a conductor – sealed a partnership that culminated in Barenboim’s being named music director in 1989, a post that took effect in 1991 and continued until he abruptly announced he would step down in June 2006, following wrangles with the administration and board over the extent of his responsibilities as music director. He also was unpopular with a segment of the orchestra and public.

The Nov. 1 subscription concert, which held Smetana’s cycle of Czech nationalist symphonic poems “Má vlast” (“My Homeland”), marked Barenboim’s return to the Chicago Symphony after an absence of a dozen years. A lengthy clamor of applause erupted from some, though not all, of the underpopulated Orchestra Hall audience before and after a somewhat uneven performance of the work’s six episodes.

Barenboim, who will turn 76 on Nov. 15, is vague as to the reasons for his staying away for so long from the orchestra some of whose members named him honorary conductor for life at the time of his departure.

“When I finished, I finished – I don’t really believe in going back,” he recently told The Chicago Tribune’s Howard Reich. But when Muti asked him to return as guest conductor, Barenboim thought, “Why not?” Although his 15-year tenure with the CSO was not without controversy, he made important changes in personnel (40 musicians, including nine principals, were his appointees) while maintaining the world-class ensemble he had inherited from Georg Solti. 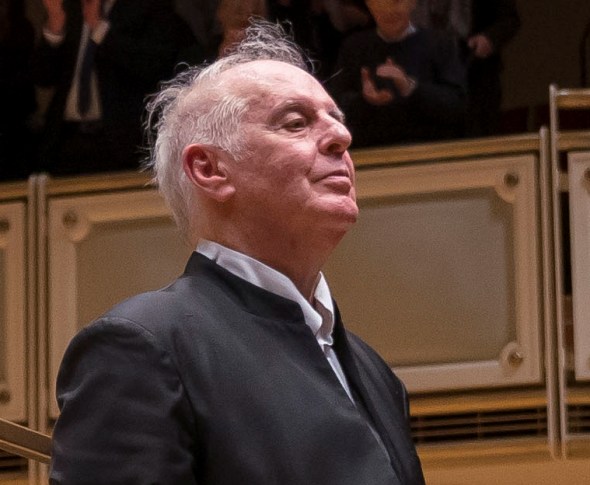 Barenboim hired 40 musicians including nine principals during his 15 years at the CSO helm.

At a Chicago press conference on Oct. 28, Barenboim made clear why he chose the Smetana cycle for renewing his long association with the orchestra, despite the fact that the CSO had performed the complete “Má vlast,” triumphantly, as recently as May 2017, under Czech conductor Jakub Hrusa.

“I love the piece very much,” Barenboim said at a press conference earlier in the week, a love affair with “Má vlast” that began, he recalled, when he first heard former CSO music director Rafael Kubelik’s now-famous recording of the cycle, taped in 1952 at Orchestra Hall. His other reason for doing the Smetana, he explained, was that he wanted to conduct something he had never done previously in Chicago. (He recorded only “Moldau,” the second movement of “Má vlast,” with the CSO in 1977.)

Bohemia’s fraught history, along with its mighty legends and sweeping landscapes, inspired Smetana to write one of the most unabashedly patriotic works in the symphonic repertoire. The CSO has performed individual sections of the cycle throughout its long history, most often the popular “Moldau” (“Vltava,” in Czech). But integral performances of “Má vlast” – including the sections that accompany “Vltava” – “Vyšehrad” (“The High Castle”), “Šárka,” “Z českých luhů a hájů” (“From Bohemia’s Fields and Groves”), “Tábor” and “Blaník” – have been few and far between, and that’s a shame, since there is much wonderful music to be found throughout the cycle. 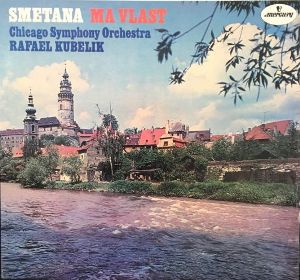 If Hrusa’s magisterial performance of “Má vlast” made him a formidable act to follow, so did the performance led here by Kubelik 34 years before, a CSO homecoming even rifer with sentiment than Barenboim’s. Both Czech conductors brought a deeply personal identification with the music and the fervent patriotism informing it that eluded Barenboim on this occasion.

The orchestra’s former chief perforce focused more on purely musical values than on nationalistic ethos. Drawing out inner details from Smetana’s rich scoring, Barenboim was sensitive to the textural distinctions of individual episodes. Utilizing his former CSO seating plan – violins divided across the podium, cellos and basses placed inside left, violas outside right – helped to point out those distinctions. His vigorously engaged conducting, cues flying in all directions, belied his age.

So much for the virtues.

The heavy hand of the interpreter, rather than what was being interpreted, was much in evidence. Barenboim’s old tendency to throw a glaring spotlight on details that don’t need to be wrenched out of musical context did not sit well with the letter or spirit of this miraculous score. Pages that Hrusa and Kubelik did not seek to distend or italicize for effect came off as so much more charming and idiomatic under their batons than they did on this occasion.

Above all, one missed the spontaneous feeling for local color that marked their memorable accounts.

The CSO musicians came through brilliantly for their former paterfamilias, despite rapid-fire cues and body language that wasn’t always conductive of precise attacks. Warm strings and bright, pliant winds were much in evidence, while the full-blooded depth and majesty of sonority Barenboim elicited from the brass brought out Smetana’s great debt to Wagner. 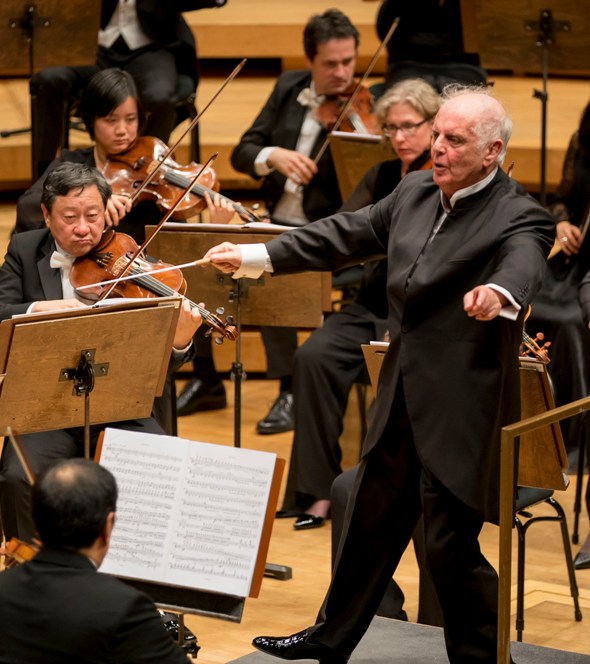 The musicians and their former paterfamilias: emphasis on virtuosity

Even so, this “Má vlast” appeared to be more about orchestral virtuosity than illuminating Smetana’s 80-minute tour of the verdant Bohemian countryside, its dark myths and turbulent history.

Barenboim set the stage with a rather neon-lit reading of “Vyšehrad,” named for the rocky precipice, topped with an old castle, that bestrides the Vltava.

“Moldau,” the familiar tone poem evoking Bohemia’s mighty river as it courses through the countryside, had its burbling woodwinds, swelling strings and gamboling water sprites. Alas, Barenboim raced through the peasants’ dance, seemingly impatient to get to the climactic torrent tumbling over the St. Johns Rapids.

“Sárka,” a portrait of a historic warrior-maiden who exacts bloody revenge on an entire cadre of male soldiers, was a highlight, blazing with high drama down to the furious final pages. “From Bohemian Fields and Groves” was notable chiefly for the rustic tang elicited from the winds.

If the weaker sections, “Tábor” and “Blaník,” were not entirely free of bombast, blame Smetana, not Barenboim. The heroic final tone poem, combining key themes of the cycle, ended with a grandly triumphant hymn as patriotic as anything in the symphonic repertoire. All things considered, these were the most successful portions of an uneven interpretation of a masterpiece too seldom heard in its entirety.

You have the chance to hear Barenboim with his “other” orchestra, the West-Eastern Divan Orchestra, on Nov. 5 at Orchestra Hall. The ensemble of gifted young Israeli and Arab musicians, which Barenboim co-founded with the late Edward Said in 1999 and directs to this day, will perform Richard Strauss’ “Don Quixote” and the Tchaikovsky Fifth Symphony. This will mark their first downtown Chicago appearance since 2006. The event will launch a four-concert U.S. tour that is to include stops at the John F. Kennedy Center in Washington, D.C.; Carnegie Hall in New York, and Zellerbach Hall in Berkeley, Calif.

John von Rhein recently retired from The Chicago Tribune after more than 40 years as the newspaper’s classical music critic.