Haitink takes a misstep on the CSO podium, but not in grand turn through Bruckner Sixth 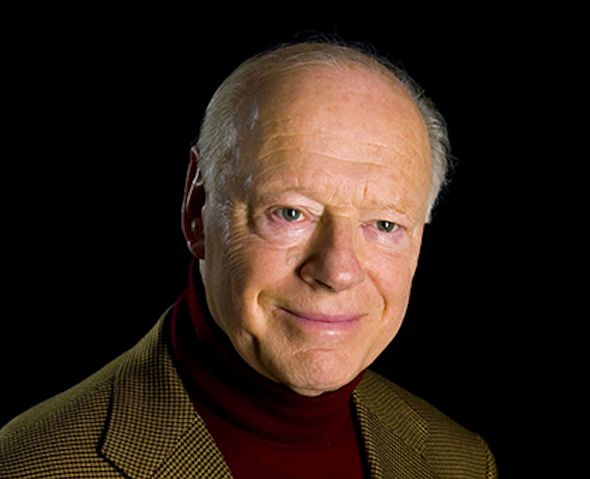 All is well with Bernard Haitink, the Chicago Symphony assures us, after the 89-year-old longtime friend of the orchestra lost his footing while acknowledging the crowd’s applause.
(Concert photos by Todd Rosenberg)

It’s not unheard of for conductors to take tumbles off the podium, on occasion. Chicago Symphony Orchestra music director Riccardo Muti suffered a health crisis and fell during a rehearsal here a couple of seasons ago. Leonard Bernstein got so caught up in one of his usual flights of musical ecstasy during a concert in Texas that he fell into the orchestra’s second violin section. 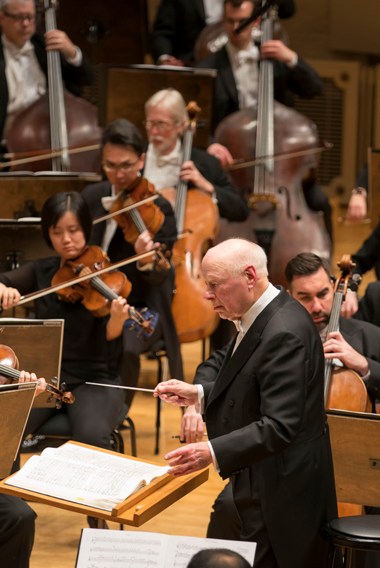 Haitink has been making his way through a CSO Bruckner cycle.

Something similar happened to Bernard Haitink following the eloquent performance of Bruckner’s nearly hour-long Symphony No. 6 he led with the CSO at the Oct. 25 subscription concert in Orchestra Hall.

As the eminent Dutch maestro, 89, apparently drained by the experience, was shaking hands with several players, he lost his footing on the step at the side of the podium and doubled over onto the stage. In an instant, the audience’s roaring ovation turned to a mass gasp of horror.

The longtime former chief of the Royal Concertgebouw Orchestra (Haitink is now its honorary conductor) was helped to his feet and was able to walk off stage in slow steps, supported by a stagehand. Aided by a cane, he returned to the stage to take several solo bows, gesturing to the relieved players and cheering public to assure them that all was well.

A CSO spokeswoman later said he was in good spirits backstage following the performance, and that he looks forward to the remaining performances on Oct. 27 and 30.

One can only wish the Chicago Symphony’s former principal conductor good health and continued visits to the guest roster (the present concerts mark his first appearance on the subscription series since 2016-17). Haitink is the last of his generation of Old World baton masters, and we must treasure these remaining opportunities to share in his wise and mellow music-making.

The program is prime Haitink repertoire — German and Austrian staples by Beethoven and Bruckner, respectively. As is invariably the case with this senior eminence of the podium, the insights are profound and the revelations many. These CSO performances of Bruckner’s Symphony No. 6 are the first he has conducted of this curiously neglected masterpiece in more than 35 years, according to the Concertgebouw website.

His Bruckner on this occasion was once again a miracle of inner nobility and outward grandeur, of plain-spoken musical integrity and a humility to match the composer’s own. No conductor gets more meaning out of the music with so few gestures, so sparing a beat. Haitink is a master of transitions, crucial in Bruckner. His concentration, keen ear for detail and meticulous regard for dynamic markings betray few, if any, concessions to advanced age. 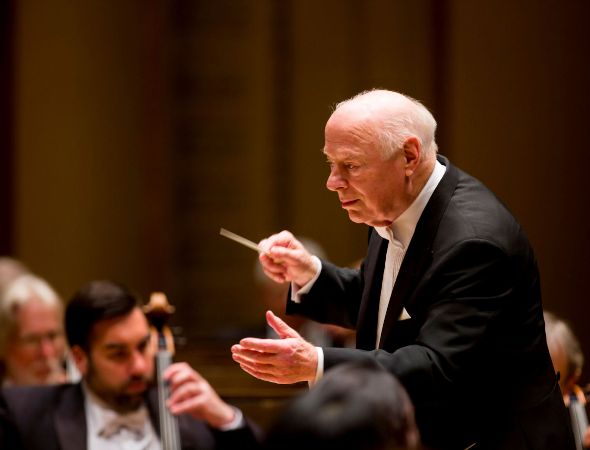 Haitink’s Bruckner: a miracle of inner nobility and outward grandeur, of plain-spoken musical integrity and a humility to match the composer’s own.

The stage had been cleared of almost every riser and all excess music stands and chairs, a set up for the stage that has been part of previous CSO/Haitink performances in Orchestra Hall. No significant increase in acoustical bloom was the result – Bruckner’s mighty chords died as soon as they are sounded – even if the magnificence of one of the world’s foremost brass choirs undergirded Bruckner’s spacious paragraphs of sound.

One element that puts Haitink’s Bruckner in a class by itself is its inevitability. His feel for the weight, shape and mass of the opening movement in no way impeded the music’s propulsive power, just as his farsighted sense of structure made for no awkward seams in the musical argument. His relatively quick pacing of the Adagio, one of Bruckner’s greatest slow movements, allowed the pages of philosophical contemplation due contrast. The ineffable stillness of the final pages was sustained wonderfully.

The Scherzo, its driving truculence offset by bucolic hunting horns, gave way to a finale arguably less majestic than others (Muti included) have made of it but no less satisfying, particularly in the delicate way the magical woodwind interludes were touched into the soundscape. The orchestra played with commanding strength and dedication for its former interim director, a couple of minor brass bloopers notwithstanding. Here was a Bruckner Sixth to rival the best of the symphonies Haitink already has directed with the CSO — Nos. 4 (“Romantic”) 7, 8 and 9. Can the glorious Bruckner Fifth be far behind?

Beethoven’s Piano Concerto No. 2 in B-flat provided a gratifying late-Classical foil to Bruckner’s big-boned romanticism. The concert marked the welcome return of British pianist Paul Lewis, in my view the leading Beethoven pianist of his generation (he’s committed all the Beethoven keyboard concertos and sonatas triumphantly to disc). The concert began with the latest entry in an all-but-complete Beethoven cycle by Lewis at Orchestra Hall that has included memorable accounts of No. 4 in 2007, No. 3 in 2014 and No. 5 in 2015. 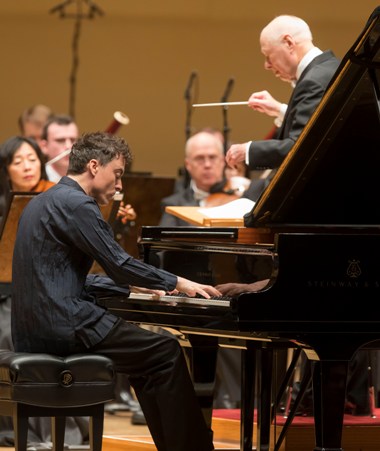 At 46, Lewis is roughly half Haitink’s age but the remarkable thing about their collaboration was how well matched they were in their gracious, unassuming musicianship, their insightful attention to Beethovenian sound and style. Neither of them goes in for overt display, and it is that feeling of deeply serious musical integrity – an attribute the great Alfred Brendel, Lewis’ mentor, also brought to Beethoven – that gave their B-flat Concerto its patrician sensibility.

Lewis savored the big first-movement cadenza Beethoven inserted into his early concerto years afterward, while the poised lyricism of his Adagio (nice dialogues with the woodwinds and strings) gave way to a finale of springy rhythmic vitality. The audience understandably went wild. I, for one, can’t wait for Lewis to complete his Chicago Beethoven cycle as soon as scheduling allows.

In other CSO news, the orchestra has announced that music director Riccardo Muti was one of five honorees receiving Japan’s Praemum Imperiale award at a ceremony Oct. 23 in Tokyo. The awards come from the imperial family of Japan and recognize internationally distinguished artists for extraordinary contributions to their art. Other honorees this year were Belgian painter Pierre Alechinsky, French actress Catherine Deneuve, French architect Christian de Portzamparc and Japanese sculptor Fujiko Nakaya.

In 2016 Muti received the Japanese government’s Order of the Rising Sun, Gold and Silver decoration for his contributions to promote cultural exchange and mutual understanding between the citizens of Japan and Italy through music. Muti and the CSO are due to return to Japan for performances in Tokyo and Osaka as part of an 11-concert Asia tour Jan. 19-Feb 4, 2019. 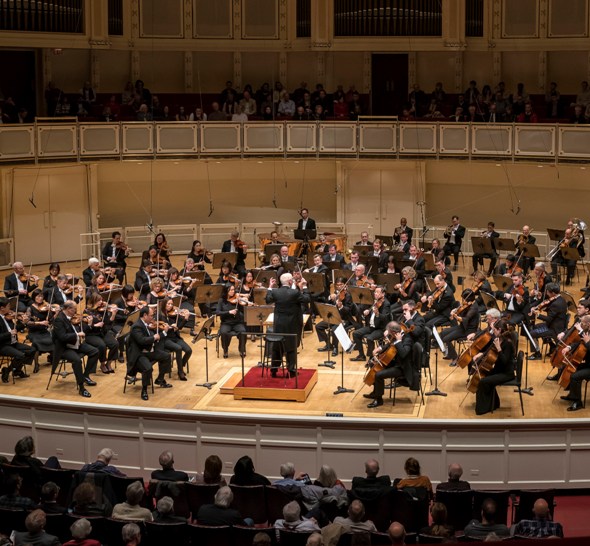 The stage was set without risers for Haitink; the concert was recorded for future radio broadcast.