‘Frost/Nixon’ at Redtwist: Brian Parry catches the posture and pitch of a sinner in confession 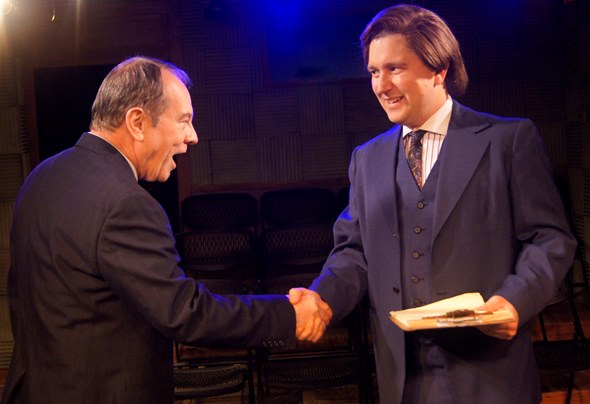 On Aug. 9, 1974, Richard M. Nixon became the first president of the United States to resign from office, rather than face almost certain impeachment and removal after the Watergate scandal. But doggedly insisting that “I’m not a crook,” he never admitted to wrong-doing – until three years later, in a most improbable interview with British talk show host David Frost. That’s the setup of Peter Morgan’s 2006 play “Frost/Nixon,” which Redtwist Theatre has brought to its compact space with Brian Parry as Nixon, up close and amazing. 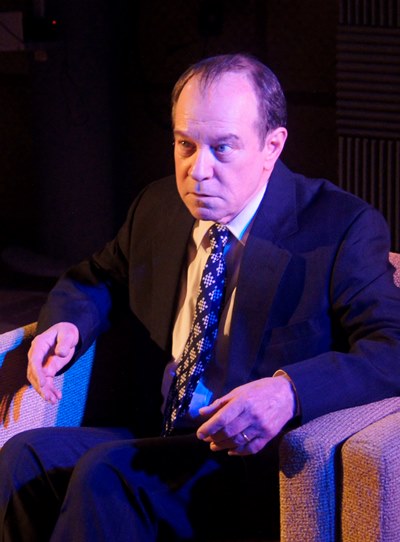 Morgan’s play works if, and only if, we can believe in the Nixon before us. Not just the look, but that husky voice with its distinctive accent, the arc of his speech, the finely gauged edge on his thought. Nixon was a smart guy, a lawyer who could swat away probing questions with the ease of a tennis champion in warm-ups. Parry gives us that fully formed Nixon. It is a remarkable performance.

Parry’s adept Nixon is well matched, or well mated, by Jason Richards’ deceptively savvy David Frost, whose career as a sort of populist interviewer – a lightweight in the general estimation – hardly augurs for the stunning confession he will draw from the iron-clad politician seated across from him through several hours of interviews taped for serial broadcast. What Frost does understand is human nature, that and the medium of television. Shunning the counsel of more hard-core journalists and political savants, Frost ultimately goes with his own experience, his own intuition, his gut sense of a man needing to come clean.

It is Frost’s rash impulse to seek an interview with Nixon in the first place. He even puts up his own money, in the expectation that sponsors will line up for such a high-profile event. Nixon sees this out-of-the-blue invitation as a cash opportunity, and his personal agent, Swifty Lazar (the delightfully oiled and calculating Adam Bitterman), agrees: This Brit will lob softball questions wrapped in a lot of green. 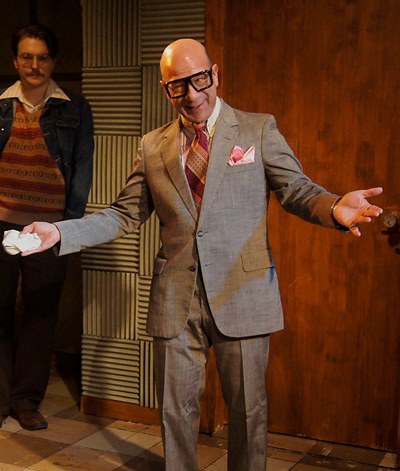 Frost doesn’t really know how or where the interviews will go, but makes the prudent move of assembling a cadre of advisers, notably the Nixon expert Jim Reston (Mike Tepeli), an arch-liberal who sees the interviews as chance to make the fallen president admit his misdeeds. Also on the team is the veteran Washington reporter Bob Zelnick (Brian McKnight).

Reston is our narrator, and Tepeli moves adroitly between filling in the story line and joining in the increasingly frantic strategizing to throw Nixon off balance and capture the grail of a mea culpa. When pretty much everything goes Nixon’s way through the first interview sessions, Tepeli paints a very funny picture of the exasperated Reston’s hand-wringing, hair-pulling despair.

And Parry is perfect as Nixon on garrulous cruise-control, the practiced politician who can deflect any question and spin an answer of earnest, meandering irrelevance. 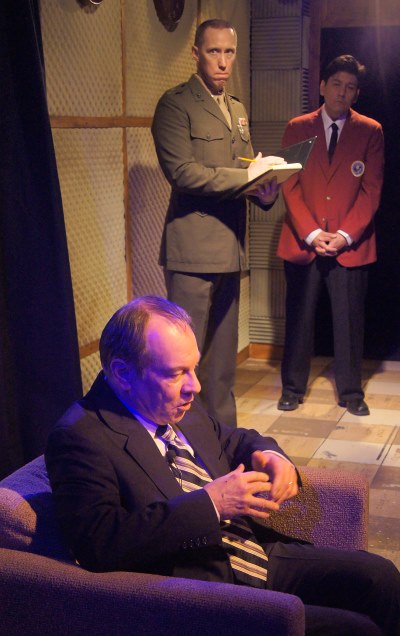 It is Nixon who oddly, indirectly turns the game. The night before the final interview, he phones Frost in his hotel room. Just to schmooze, it seems. Just a chat in the middle of the night, to get to know Frost better, talk about small stuff, personal things, how the television star thinks the interviews are going. In a sense, this is the finest moment in Parry’s performance. Nixon has been drinking, maybe not all that much, but there’s something on his mind, something that bubbles beneath the kibitzing, something neither we nor Frost can see. But the practiced interviewer, this attuned observer of people, senses it.

Even knowing the historical outcome, the denouement is arresting to watch. When Richards’ suddenly purposeful and more incisive Frost pounces, Parry’s surprised Nixon starts through the familiar motions of fending him off – then, like a troubled patient seated before a psychiatrist, unmasks the awful and long-held guilt. It’s about as simple as that. No protest, no histrionics. Just release, and relief.

There’s a touching epilogue between Nixon in golfing attire and Frost come to say goodbye. Life will go on for both men, the observer and the observed, the latter looking fit and looking forward.