John Williams, baton (or light saber) in hand, leads CSO and fans on tour of his film music 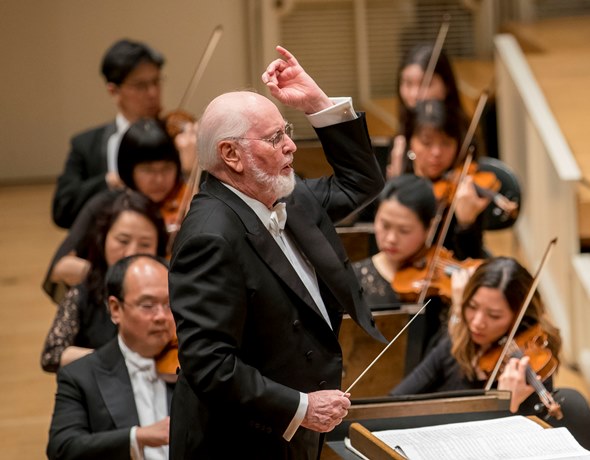 John Williams, the 86-year-old film-music ruler of galaxies across the observable universe, brought his matchless light to the Chicago Symphony Orchestra and a roaring audience at Orchestra Hall on April 26. He raised his light saber-like baton – or was it the other way around? – and meticulously, joyfully lit up the place. 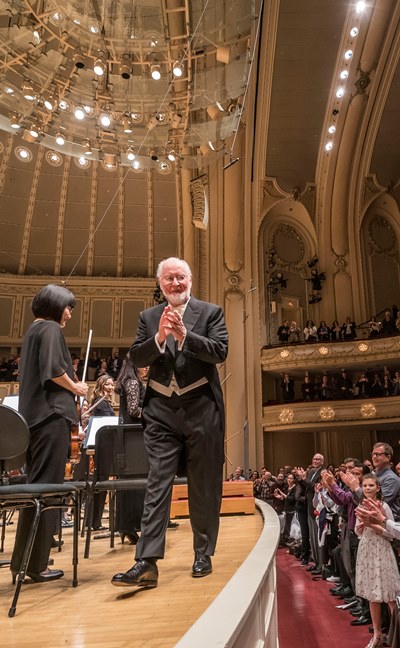 The grand old – no, this grand, ageless – man, who spent 14 seasons as principal conductor of the Boston Pops Orchestra, proved to be a wizardly advocate of his volumes and volumes of music for films (more than a hundred of them) ranging from the “Star Wars” series and “Superman” and “Indiana Jones” to “Jaws,” “Close Encounters,” “E.T.” “Jurassic Park” and on and on and on.

He came to Chicago to lead a sort of tour of his film-music landmarks, and naturally his admirers turned out in droves to see him. To see this rock star. What other tag can you put on an artist whose first beaming appearance from the wings brings an audience to its feet whooping and cheering and pouring out its love?

The love cut both ways. Picking up a microphone, Williams lavished his praise on the Chicago Symphony – and on his listeners and Chicago in general for preserving and nourishing this great ensemble he’d come to know and admire deeply over the years.

Then he wheeled around, raised that precise stick and launched into the concert’s second half with music from “Hook,” “Jaws” and “Lincoln.” I sensed my eyes widening, and I know I leaned forward. That pinpoint baton, the left hand and (I have no doubt) those eyes on the band drew forth dazzling but also finely articulated sound that was fundamentally different from the program’s first half – which Williams did not conduct.

The pre-intermission part fell to Richard Kaufman, surely best known to CSO audiences as conductor of the orchestra’s film concerts. Kaufman told the audience he felt like an accordion player opening for the Beatles. But he and Williams go way back. The chemistry between maestro and orchestra was, however, stunningly different from one conductor to the other. 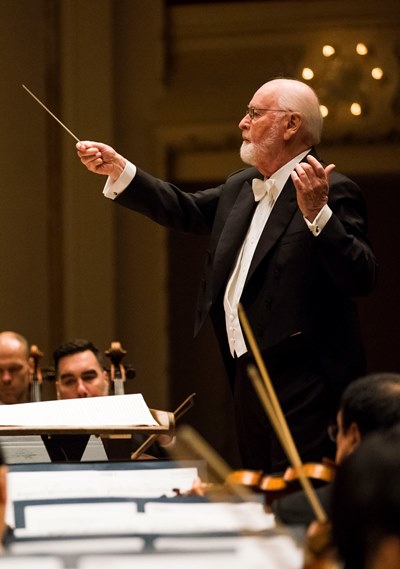 Kaufman elicited some elegant playing in music from “The Cowboys,” “Jane Eyre,” “Minority Report” and “E.T.,” but the pleasures were largely on the surface. When Williams stepped onto the podium, the music seemed to illuminate from its interior. And that brilliance carried from selection to selection through the end of the program with the variously romantic and hair-raising effects of a “Star Wars” sequence that coursed through “The Last Jedi,” “The Force Awakens” and “A New Hope.”

Before each number, Williams turned to the audience with a little anecdote, some reminiscence about how the music came to be or touching on his long and close friendship with director Steven Spielberg. He was so charming that the audience might have stayed even if the orchestra had left the stage. But Williams was there for the music, and in that cause he seemed well nigh indefatigable.

Never mind that he hadn’t conducted the concert’s first part: He pretty much added a third with a cluster of encores. The audience would stand and cheer, and Williams would make a little gesture of acknowledgement, then bounce onto the podium for one bonus after another that needed no introduction: the lyrical Marion theme from “Raiders of the Lost Ark,” the march from “Superman” and the Imperial March from “The Empire Strikes Back.”

The first chords of the Imperial March brought a gale of recognition and approval from the house. But neither Williams nor the Chicago Symphony was merely getting through it, serving up the de rigueur finale. This was finely wrought composition from the hand of its maker, delivered by an orchestra that had its collective head in it. And a big smile on its collective face.