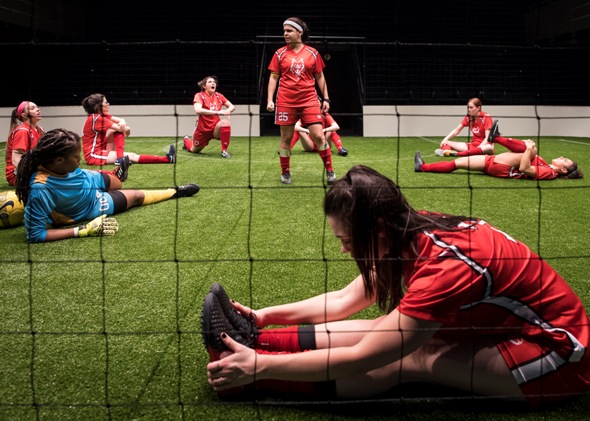 “The Wolves” by Sara DeLappe, a Chicago premiere at Goodman Theatre, extended through March 18. ★★★★

The action unfolds on an indoor soccer field. A team of teenage girls enters in formation to undergo their pre-game stretches, squats, and ball-handling drills, and they’re all talking at once.

Only a few minutes into this breakthrough play by Pulitzer-finalist Sarah DeLappe, snatches of conversation begin to bubble up from the din, while we observe the team, stadium-style, behind protective netting. These athletes are girls still, that much is clear. 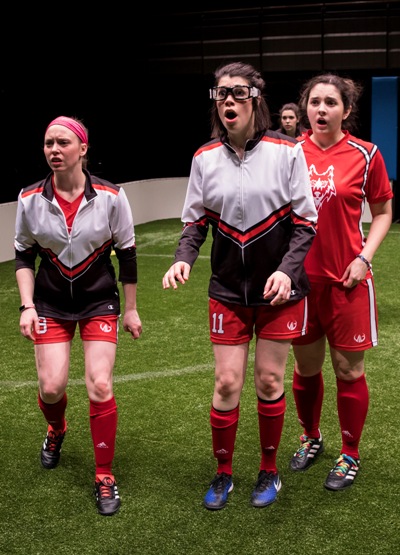 Their disembodied chatter has the carefree tone of smart kids who know a little and assume a lot, to wit: Their coach has his usual hangover. Tampons are way better than pads. The Khmer Rouge were like Nazis in Cambodia. WHY would you want to watch a DOCUMENTARY? The new girl lives in a yogurt! No wait, a yurt. What’s a yurt? As yadda yadda goes, it’s fascinating and very funny.

A fast 90 minutes trace the Wolves’ arc of development, week after week, as these 16- and 17-year-olds coalesce into a fighting force. Meanwhile, that other towering season – adulthood – looms inevitable. Both are transformations thrilling to contemplate. There are no mirrors, no men, not even a coach within earshot to inhibit the high-energy interchange that flows freely as these awesome almost-women flex their muscles and get ready to contend.

When I watched this play for the second time (the first was in New York), I found myself thinking how important is this gift, an extraordinary play by a millennial playwright depicting self-confident girls who intend to romance the world on their own terms. 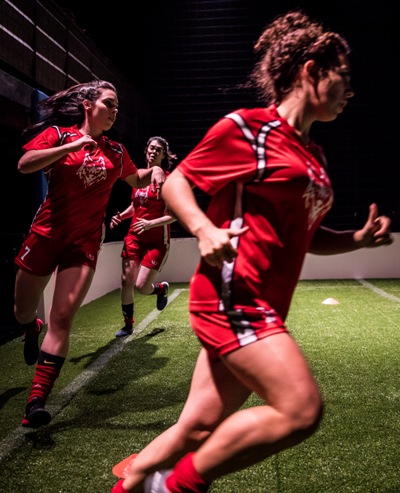 Goodman’s all-Chicago cast is new to “The Wolves,” and so is the local creative crew led by director Vanessa Stalling and designer Collette Pollard. The actors all portray teen athletes (headed by Isa Arciniegas as the team captain and motivating force) and except for one lone adult, a “soccer mom,” who shows up toward the play’s end, they own the stage. There’s not a man in sight, the boozy coach being MIA.

The great literature of our culture moans with Cassandras and Juliets and Blanches and Ophelias tragically foiled in their aspirations, but I don’t see tradition’s cautionary tales clipping the wings of these determined doers. For the soaring aspirants in this soccer flock, the sky really is the limit. Some efforts may fail, but I doubt that players #00 and #25 and #2 and #14 and #7 and #8 and #46 and #11 and #13 (for that is how we know them) will be pining for Prince Charming. Or tolerating James Bond. Or needing to Kill Bill. 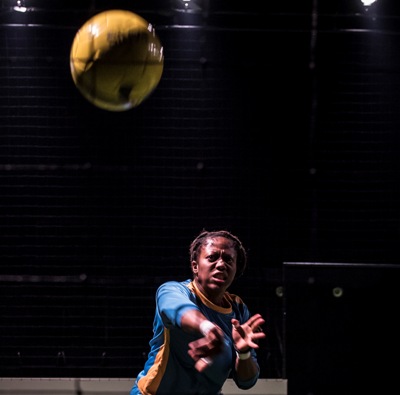 Much like bands of brothers thrown together in iconic war films and caper flicks, this striving team comprises a motley array of personality and body types, with widely varying backgrounds and degrees of maturity and bravado. Yet the Wolves push mind hard over matter, and they manage to stay a team no matter what. We watch as Angela Alise, the goalie (or #00), responds to a loss with a primal scream and a breathless drill around the field. She is beating herself into the next stunning level of endurance. It’s an impressive moment that also speaks to the quality of training these actors received from soccer skills coach Katie Berkopec.

All nine young actors have athletic skills; #00 and #46 (the new girl from the yurt, played by Erin O’Shea) are of necessity particularly deft: After hearing “yogurt” once too often, #46 launches into a ferocious leg-and-foot “yurt-fit” – juggling the ball in mid-air while screaming “Yurt” over and over and over. It invokes awe in the Wolves realm. 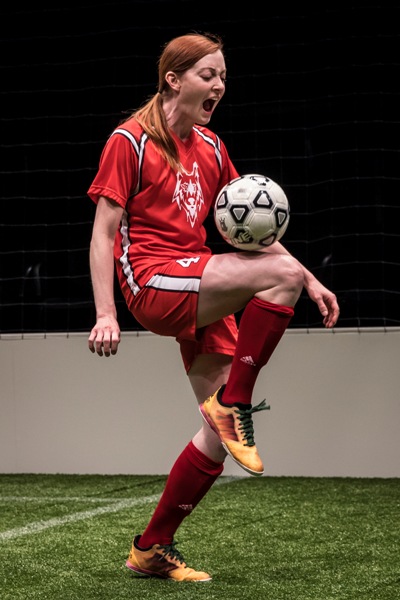 Grandmothers who remember being coached by elders into sweet subservience, or being implored above all to marry well, may want to stand up and cheer at this moment, in honor of their own grandmothers, who wouldn’t have had the right to vote, or to work most jobs. One yurt-fit stakes new ground for them all.

What we learn about the rest of the team we glean on the fly, and that’s part of the fascination. “The Wolves” is a dazzling piece of theatrical chamber music about girls becoming women, with the recurring refrain of the practice ritual, and the realization that no one can ever know the full truth about another person, or what goes on in her home.

There are believable, and touching, suggestions of off-the-field pressures in the intimations of acute anxiety, eating disorders, intrusive parents, boyfriends that are too old for this moment, home-schooling, and emerging sexual identities, all handled by the playwright with elegant understatement.

An injury, followed by a surprise visit from a college scout, creates bigger fissures. And there is one other, far more devastating turn of events that shouldn’t be told except to say that these girls are a team. They will prevail. They are The Wolves. 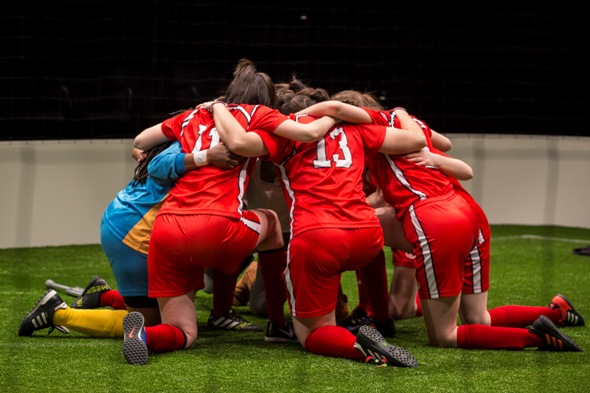