‘Franklinland’ at Jackalope: Ben lords it over his son, who naturally tells him to go fly a kite 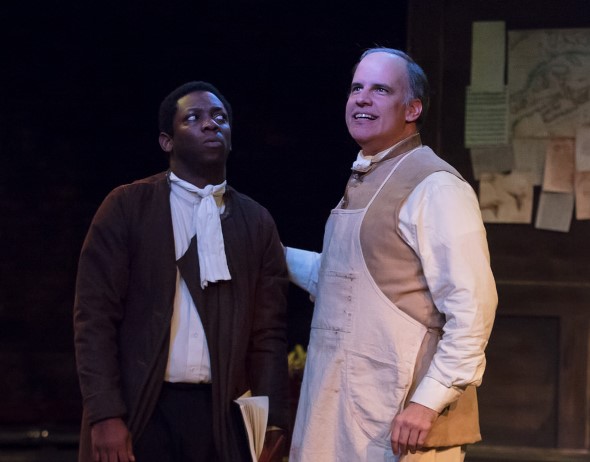 Review: “Franklinland” by Lloyd Suh, at Jackalope Theatre through Feb. 24. ★★★★

Imagine being the kid who followed in Mozart’s footsteps or, to take the instance at hand, ponder a delightful afternoon kite-flying with Benjamin Franklin: You are his young bastard son trying to keep up; he is the irrepressible achiever, inventor, visionary – a narcissist who, when he sees you at all, looks upon you as a project at best and, as he constantly reminds you, a poor copy of his matchless self. 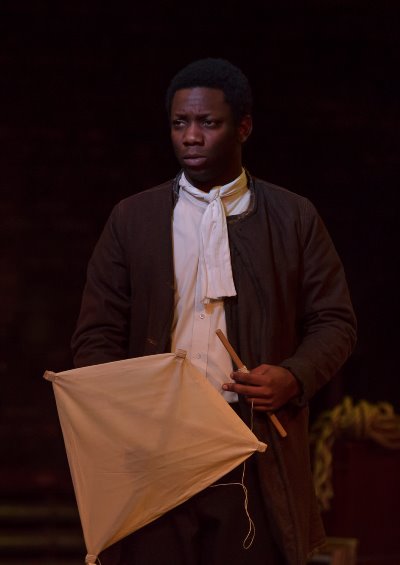 That’s the skewed but fascinating relationship played out in Lloyd Suh’s “Franklinland,” essentially a two-hander that Jackalope Theatre offers in a taut, headlong production directed by Chika Ike, with Tom Hickey as Ben Franklin and Kai A. Ealy as his historical illegitimate son William.

Broadly speaking, the events and circumstances of Suh’s drama are grounded in history. Ben Franklin’s bastard son William rose in the world to become a British loyalist and the last Colonial governor of New Jersey. William was imprisoned by the revolutionaries and later released into exile. Even from prison, he worked against the Revolution by every means possible. Ben Franklin made repeated efforts to bring William to the cause for independence, but to no avail, and father and son never fully reconciled.

Suh does invoke one bit of creative license at the play’s outset, where we see William as a boy helping Ben with the great kite experiment of 1752. William did assist his father, but he was 21 by then. Suh’s little fabrication serves to drive home how overwhelmed the child William feels in the face of his father’s hard-charging brilliance. Turn by turn, we see William trying to measure up to the old man, declaring himself like his father, confessing that he wants one day to be so great a man. 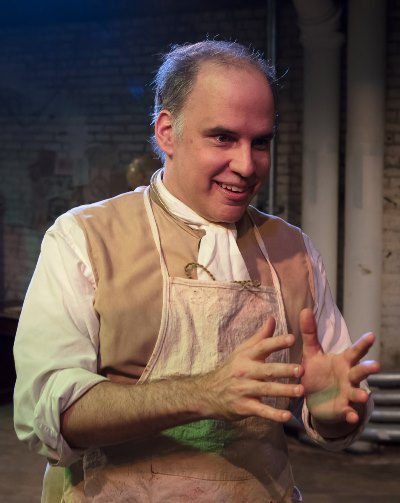 All of which Ben dismisses out of hand. They are not alike, the boy’s father observes matter-of-factly. Ben spells it out for the boy: Whereas the father is a force of nature (you might say the embodiment of lightning itself), the lad is quite ordinary. No, he shouldn’t hope to emulate his father: William is not made of such rare stuff.

Ealy’s progression from dazzled boy to an independently thinking man, accomplished in his own right, and withal a son stained with bitterness to his core, is credible and affecting. Yet it is Hickey’s unwavering, off-hand display of Ben Franklin’s willfulness and airy hubris that dominates the stage. Ben really doesn’t notice that his son is growing up, that he has acquired a mind of his own, that in receiving a royal appointment as governor of New Jersey he has achieved something worthy and honorable.

Ben’s reaction: “New Jersey? New Jersey?” Which he keeps repeating – along with the rhetorical question edged with contempt: Why? Why would you want to be governor of New Jersey? 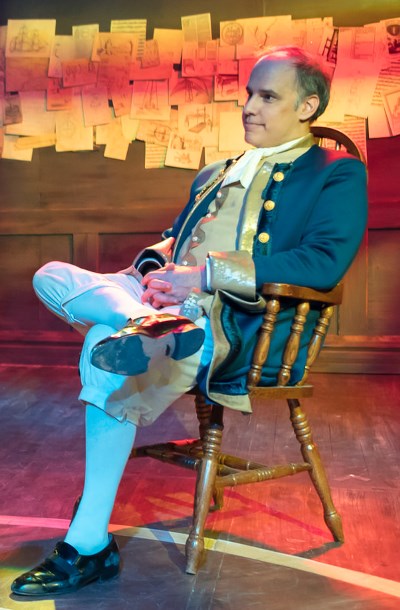 But William flourishes, becomes wealthy and gains real power as an agent of the crown. Ben has one last better idea for his misguided son: that he relocate to a vast tract of land that Ben owns in Nova Scotia. Ben calls the tract Franklinland. He had envisioned it as the site of a retreat for great thinkers and men of science to gather and work toward a better world. But now a different Franklinland has arisen: this staggering, thrilling experiment called the United States of America.

It is William’s turn to react: This experiment is nothing more than insurrection; it is illegal; it is punishable by death even for his own father. The philosophical chat between father and son does not end well. You could say they go to mat to settle their political rift.

I said “Franklinland” is a two-hander, and that’s largely true. A third actor comes into view near the end, through a gesture by Ben that speaks of compassion and conciliation toward his son, or perhaps respect. And almost certainly love.