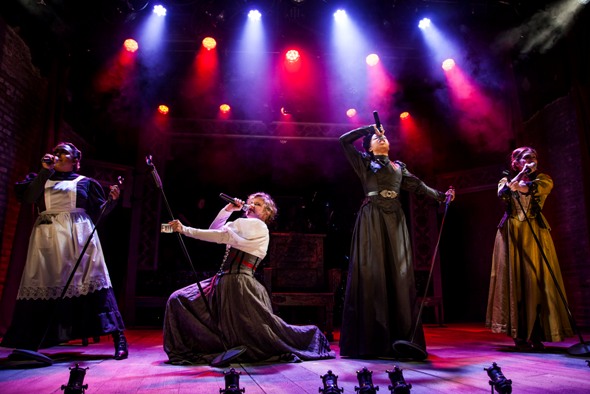 “Lizzie,” a musical inspired by the Lizzie Borden legend, produced by Firebrand Theatre at The Den, through Jan. 14. ★★★★

I didn’t catch “Lizzie” – the musical with a riot grrrl twist on accused axe-murderer Lizzie Borden – when it opened at The Den last November.

But I am bloody glad I caught the current extension of this passionate musical wonder from a new Chicago company called Firebrand. Race to see it if you can, and hope that “Lizzie” again extends.

The Den Theatre’s Bookspan space will continue to dole out protective “splatter ponchos” for the folks in the first row seats at the limited encore run of this wickedly funny take on how things probably went down that fateful day, in 1892, when Lizzie and her sister Emma lost their Scrooge-like father and the “second Mrs. Borden” (not their mom).

Lizzie’s acquittal in the unsolved double murder was a cause célèbre if ever there was one. The historical facts are these: Lizzie’s father and his second wife Abby were hacked to death in separate rooms of their Fall River, Mass., home on a sweltering August morning. Lizzie, at the time a 32-year-old spinster, was put in jail for months as a suspect, but once at trial she was acquitted by a unanimous jury within an hour, to cheers of joy from local townsfolk.

The wider court of public opinion was having none of that, however. Especially since the murders remained unsolved. If we, too, think the “forty whacks” nursery rhyme is probably closer to right than wrong, then our next bit of business is to imagine why Lizzie did it. 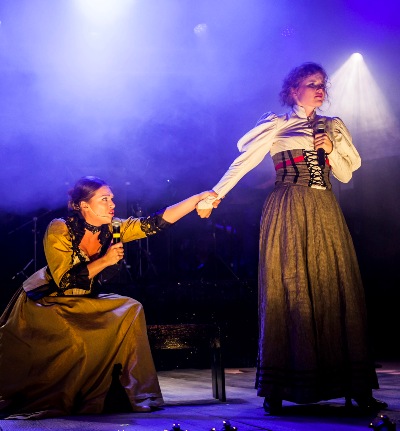 With ancestral blood that “splatters o’er” — do spread out your ponchos — this musical puts Lizzie squarely in the tradition of Sweeney Todd and Hamlet and Clytemnestra and the girls of the “Cell Block Tango” who claimed “He had it comin’.”

“Lizzie” has been polished into a hardy jewel of a shocker by the director Victoria Bussert, who nurtured her concept at Cleveland’s Playhouse Square and his since directed both the London and European premieres. This staging features an all-female cast, band and crew, which is part of Firebrand’s mission to expand opportunities for women on and off the stage.

With four mikes on simple stands out front, and the spare main floor of a house at the back, the stage doesn’t look like much of anything at all until the action starts. And then the place lights up like a triumphant rock concert. 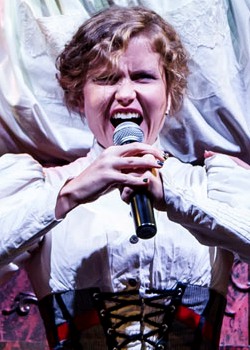 “Lizzie’s” music, lyrics and book are hyper-smart; change-ups of style and pace abound. Steven Cheslik-deMeyer, Alan Sevens Hewitt and Tim Maner collaborated in earnest on this idea as early as the 1990s, and frankly it’s now a show so tight that it seems like it could go on forever, more or less like “Million Dollar Quartet” has done. It works on a small stage and needs only a cast of four. But they do have to be a Fab Four, and Chicago’s cast is that:

Liz Chidester, the terrific singer-songwriter, takes the starring role of Lizzie, who is desperate to escape a father’s wandering hands (“This is Not Love”). Mesmerizing in Lizzie’s pathetic confusion, Chidester is tiger-like when the troubled woman finally breaks free. A nifty bit of grotesquery brings Lizzie’s stifled rage into sputtering frenzy — the decapitation of her beloved pet pigeons by her cruel father. “Why are all these heads off? Why are all these heads off? Why? Why? Why?” she sings as her friends rally around her, and she decides to choose her weapon of revenge. A spirited chorus of inevitably follows.

Imported for the Chicago extension part of the run is the fiercely magnetic Ciara Renée as Lizzie’s protective, “dark-souled” sister Emma. It is she who coaxes Lizzie out of denial and then must scramble to deal with drastic consequences. (Having done Emma at Playhouse Square, Renée seemed to drop effortlessly into the show’s intricate and eye-catching pretzel choreography.) 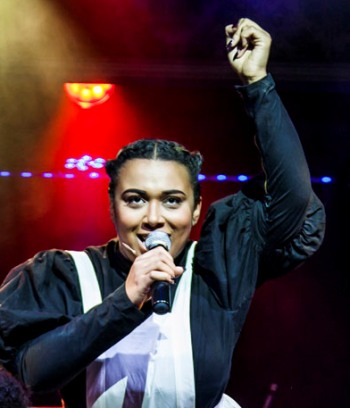 Bridget, the kitchen maid (feisty and droll Leah Davis) is a rather like the three witches of “Macbeth” rolled into one (“Fire burn and toil / Kettle bubble”) as she envisions an appropriate “cuppa tay” for the master. Bridget’s handbook of household poisons, seductively funny, awakens Lizzie to the idea of “Mrs. Borden R.I.P.”

Neighbor Alice (sweet-voiced Jacquelyne Jones) is deeply enamored of Lizzie — her song “Will You Stay?” is a hypnotic knockout that makes a surprising comeback, once the tables turn toward the show’s end.

Music director Andra Velis Simon works with a very fine seven-piece, all-female band here. She should have some fun with the next show — “9 To 5 The Musical” — coming in April. It’s based on the 1980 movie, with those great songs by Dolly Parton, of course. The musical, which had a disappointing five-month run on Broadway, might actually work better in the smaller Bookspan venue where “Lizzie” is holding forth.