‘Violet’ at Griffin: When a young woman’s scar cuts to her heart, bus ride to healing beckons 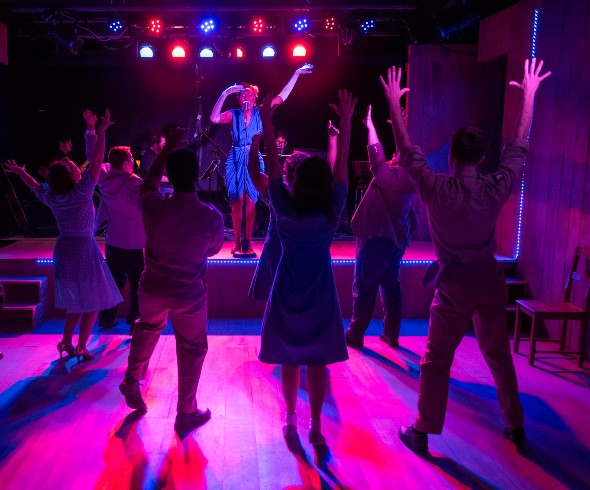 Review: “Violet,” with music by Jeanine Tesori, book and lyrics by Brian Crawley. Produced by Griffin Theatre at The Den, thru Jan. 13. ★★★

The scar on the young woman’s face cannot be seen, but it is real – as real as the invisible wound in her soul. And so she leaves her southern farm on a bus for Tulsa to see a faith healer, in hope of once more finding beauty in the mirror. What she ultimately finds is unexpected, and far more profound, in the bittersweet musical “Violet,” offered by Griffin Theatre in a production notable for both its charm and its grit. 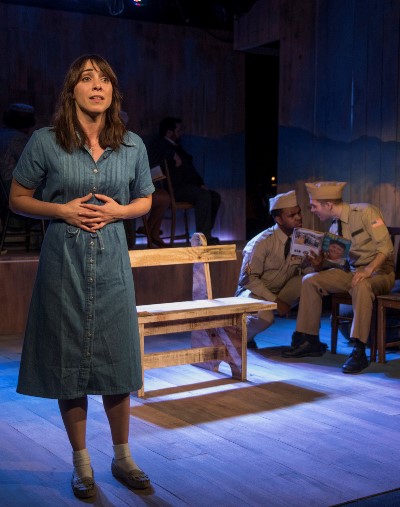 In a flashback, we see that Violet suffered her disfigurement when she was a child. Her father was chopping wood when the axe head flew off and the blade struck her face. The present tense of this folkloric narrative – book and lyrics by Brian Crawley, with music by Jeanine Tesori – is 1964, and Violet, having scrimped for the fare, is on her way to receiving the miraculous powers of the TV faith healer whose programs have inspired her with hope and resolve.

En route, Violet (Nicole Laurenzi) forms what is at first a sort of buddy friendship with two traveling soldiers, the outgoing, confident and aggressive Monty (Will Lidke) and Flick (Stephen Allen), a quiet young black man who is observant, practical and, in his understated way, empathic with this determined young woman.

Violet breaks the ice with these guys at a rest stop when, to their surprise, she slides into a seat between them to join their poker game. In another flashback, we see how she learned her way around cards: Violet didn’t like math in school, so her daddy (Matt W. Miles in an affecting, subtly modulated performance) taught her to play poker and learn to bet with pennies from her savings jar. 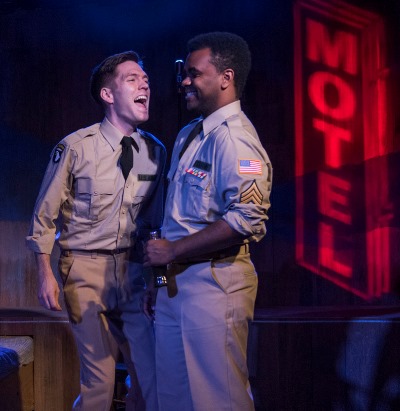 The Violets present and past are played by two actors, with Maya Lou Hlava as the very appealing and vulnerable child – full of life, innocent, devoted to her father. It isn’t until late in the play that we witness the terrible accident, and then only in stylized form; but we absolutely get it when we see Violet’s frantic dad carrying the blood-soaked girl in search of help.

And now here she is, grown, still bearing the dreadful scar, still bleeding at her core from that wretched ugliness. But we do not see the injury, and that is an extremely effective device. To us, Violet’s face is unmarked; indeed, I initially found myself straining to see the awful wound. Her fellow passengers on the bus see it, but we viewers must imagine it – must imagine not only the disfigurement, but also the reaction of people who see Violet for the first time, their compassion and their readiness to look past it. 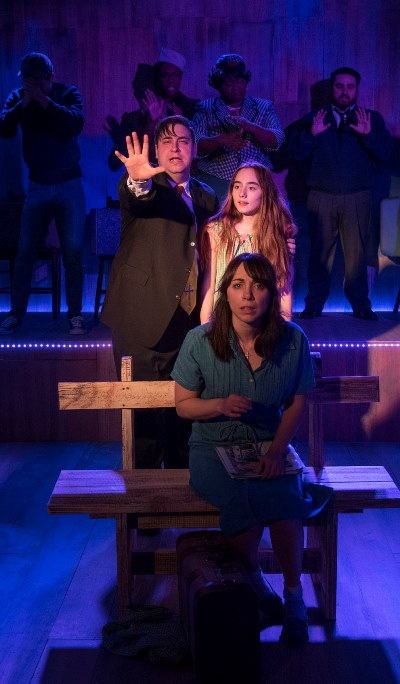 Which brings me back to Violet and the soldier boys. Laurenzi, though sweetly engaging, is perhaps a bit too uncomplicated as Violet. While it’s the girl’s story, the characters we keep turning back to are the two GIs. Both Lidke’s rakish Monty and Allen’s contained Flick deliver their songs with greater vocal authority than we hear from Laurenzi. And the lads exhibit more intricate personalities. Both of the soldiers begin to think in terms of the boy-girl thing, one more purposefully than the other. That’s an amusing dynamic, especially with the reinforcement of composer Tesori’s rock-folk-gospel score.

The gospel part rushes to the foreground once Violet arrives in Tulsa and makes her way to the television studio where the Bible-thumping healer (Anthony Kayer in a deliciously over-the-top turn) is rehearsing with a high-powered vocal girl group (which is maybe the show’s musical highlight).

Director Scott Weinstein ratchets up the dramatic tension as we see Violet’s dream of her own restored beauty shattered. Essentially, she has peered behind the curtain to find a ranting poseur-as-wizard. Yet there is still love.

And perhaps Violet finds it. Seems so, and we want to believe it. But that bus is just leaving the station.