‘Belle of Amherst’ Emily Dickinson, pulled from pocket of a shirtdress at Court Theatre 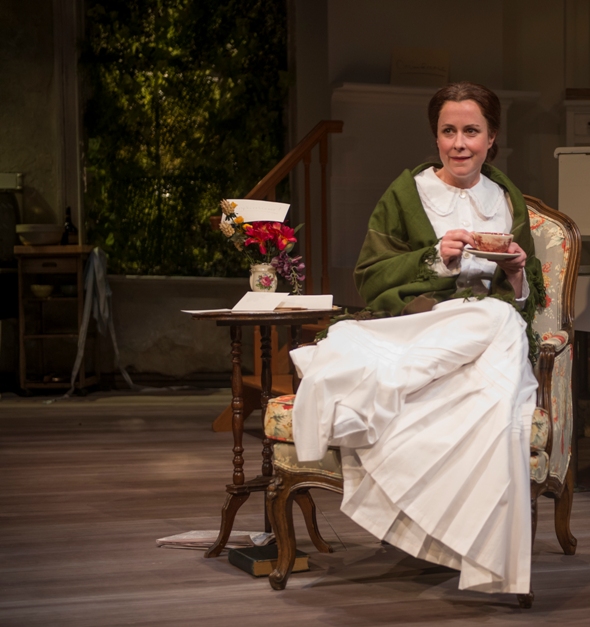 Review: ‘The Belle of Amherst’ by William Luce, at Court Theatre through Dec. 3 ★★★★★

Imagine how the 19th-century poet Emily Dickinson would have responded, in her fifties, to the notion that a 20th-century playwright called William Luce would pen, for New York and London, a one-woman play devoted entirely to her essential brilliance.

That a man whose last name happens to mean “light” in Latin would attempt such a clarifying feat, nearly a century in time from her own obscure reality: Only a few of her poems had ever been published, and all anonymously. I can see Dickinson’s fingers now, darting into one of her voluminous shirtdress pockets for a bit of paper, as four lines of High Mirth on this absurdly impossible topic were taking shape for a rhyme. 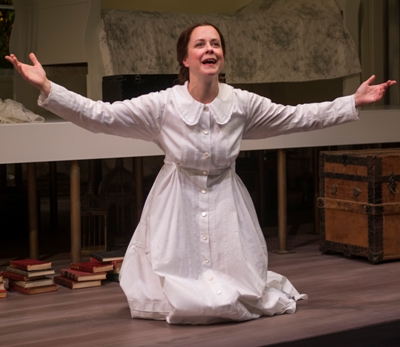 Luce’s theatrical portrait of the luminous New England poet – brought to radiant life by Kate Fry in a triumphant feat at Court Theatre – opens with a scene that surely would have made Dickinson chortle at the comedy. Amherst’s most notorious recluse is walking into the room from which she barely ever leaves. And then she catches – out of the corner of her eye – the supreme irony of an audience. Hundreds of people. Instead of a bedroom wall.

With the tiniest commiserating grin, Fry’s shy Dickinson embraces this utter incongruity; it’s just another mental puzzle to solve. She welcomes us in with a recitation of her lavish recipe for black cake, soaked in brandy and rich in raisins, currants, molasses, eggs and other cure-alls for the modern diet.

From that diversion, a nudge by Fry propels us from her stove-cooked dessert into Dickinson’s delicious head. This exquisite play is a tour-de-force for Fry, a time-lapsing treat, framed with sheer elegance by director Sean Graney on sets by Arnel Sancianco. Together they make the nonstop case for a poet whose creativity is so powerful that she must harness it, however playfully, with rigorously spare mental feats. 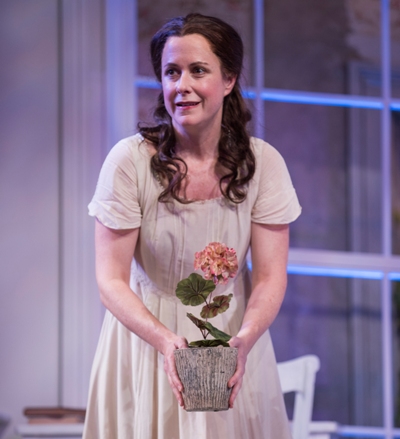 Thus the view from the window in Amherst, Mass., is plenty vast given her gift for zeroing in. Fry’s Dickinson thrives on distilled quiet. The smallest thing, a single word, a moment in the day – the flap of an envelope – becomes her preferred door of escape into thoughts on truth, eternity and transcendence.

Dickinson became a master of her art even as her contemporaries, and thus history, surmised other reasons for her extreme quirkiness. In recent times, the film-maker Terence Davies made a biopic called “A Quiet Passion” (starring Cynthia Nixon) that delved deeply into Dickinson’s mundane domestic routines and imparted to her character a stiffening of habit, widening of anger and withering of spirit in response to a cascade of grievous personal slights, family betrayals, illnesses and deaths. 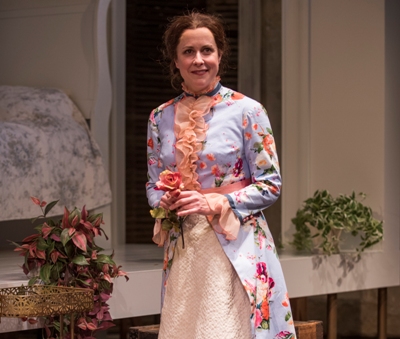 Davies has an interesting point of view, but I prefer the tack that Fry, Luce, and Graney take. They keep the focus – always – on the essential joy Dickinson exhibits in the act of creation, despite sometimes devastating blows. There is room for Dickinson’s fierce honesty and her proto-feminist spirit, of course. But I am put in mind of some of the letters her editor Thomas Wentworth Higginson once published, in the Atlantic Monthly, after Dickinson’s death.

Her letters written to him seemed to lapse into poetry and then resume in narrative stride, as if she was composing poetry instinctively, perhaps even unconsciously, escaping into the Beautiful, no matter what else she was doing. It is to playwright Luce’s enormous credit that the same thing happens on stage. One minute, Dickinson is talking, and then her language starts to sing, and rhyme, and become almost drunk in a widening circumference of allusion as she continues her thought.

Dickinson’s fingers are always reaching for those bits of paper in her pocket. In that habit she is much like a professional trumpeter I once knew who was never without his horn. He rarely brought the instrument to his mouth, but his fingers would get excited when he talked about something of particular interest; you knew that a part of his brain was occupied with unheard melody. 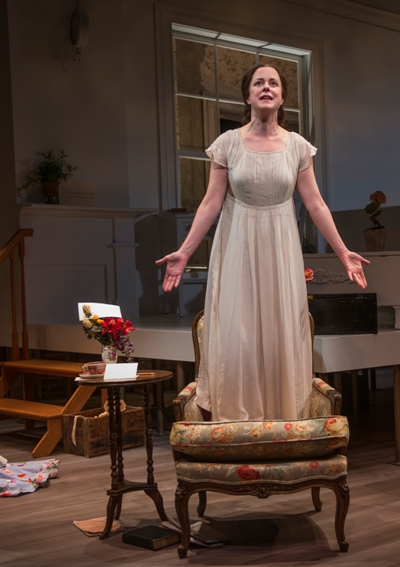 Fry and Graney convey this notion of Dickinson as an artist first and foremost, through and through – even into the examination of her singularly romantic broken heart. I cannot imagine a better actor to take you into the soul of Dickinson than Fry, whose mastery of detail, and whose discipline of expression, honors the poet’s incandescent inner life.

If you have never even read a line of Dickinson, be fearless about this opportunity still. It is thrilling. The character that Fry creates onstage before you is a woman out of your great-grandmother’s era. Or your great-great-grandmother’s. Surely an extraordinary intellect with a Shakespearean command of language and idea.

Yet Dickinson was a woman, and as such rather peculiarly equipped to define a world of possibility for herself within the extremely limited circumference allowed by the Puritanical, paternalistic community into which she was born.

Take that word “circumference.” It’s one of her favorites, a thing of beauty. At one point, Fry’s wide-eyed poet repeats it ever so slowly. She writes it down and puts it out at the edge of the stage, on display.

Surely she beholds it as a challenge.

Postscript: For an excellent Dickinson memento, there is a superb recent book called “The Gorgeous Nothings: Emily Dickinson’s Envelope Poems,” which presents exact replicas of the poems she penned on whatever scraps of paper came her way. The family, though thrifty, certainly had means; one senses that the color, shape and feel of the paper itself was all the prompting the poet required.