‘Rigoletto’ at the Lyric Opera: Not for the eye, but it’s a triple treat vocally, and that’s no jest 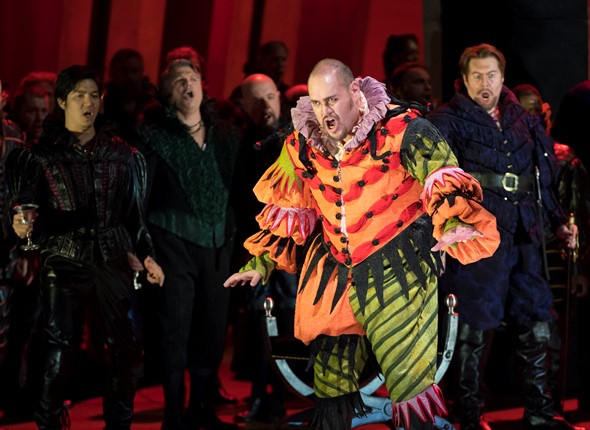 The three core roles in the Lyric Opera production of Verdi’s “Rigoletto” are so magnificently sung that one might forget what an arid and ugly production this really is.

Thanks to the vocally resplendent and emotionally engaged performances by baritone Quinn Kelsey as the hateful and paranoid court jester Rigoletto, soprano Rosa Feola as his sheltered and naïve daughter Gilda and tenor Matthew Polenzani as the sexually predatory Duke of Mantua, the Lyric’s “Rigoletto” pays significant rewards as psychological drama. But this bleak, objectified take, created 20 years ago for the San Francisco Opera with sets by Michael Yeargan – and directed here by E. Loren Meeker – all but nullifies the work as theater. 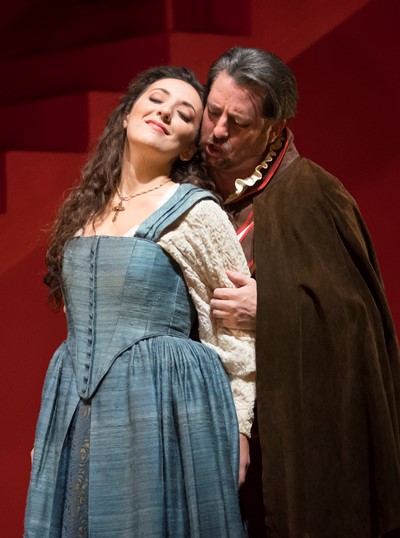 It’s a weird experience, actually. Rather than an opening scene that bespeaks the posh indulgence and revelry of the 1 percent in old Mantua, Yeargan gives us an austere courtyard defined by opposing walls, one of which leans in toward the other. Presumably, this symbolizes the coldness and moral warp of its aristocratic inhabitants. But every other scene bears the same glum aspect.

Rigoletto’s home, where he cloisters Gilda from wickedness (or at least thinks he does), is devoid of any creature comforts. It is, sum and substance, a red box with a red staircase. Let’s see: Would that represent the peevish jester’s hell on earth? And to think the sexually awakening Gilda has been immured here, permitted out only for church on Sunday, since Rigoletto brought her to the city three months ago. No wonder she throws open her door to the young swain (the Duke in disguise) who has followed her home from prayer. O brave new world, with a man in it who isn’t endlessly carping and fretting – and who might come bearing, as token of his affection, something that isn’t red. 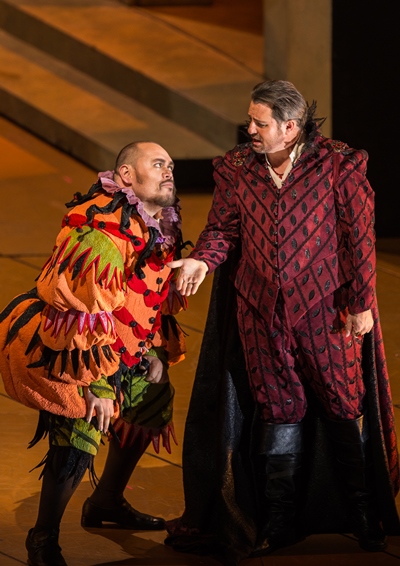 And yet, even in this claustrophobic vermillion hideaway, Kelsey and Feola managed vocally to transcend the space and convince us of honest love and caring shared by a tormented man and his adoring daughter. Credit must go as well to conductor Marco Armiliato, who shaped warm and pliant lines here as he did at every turn in a production that kept pulling with Verdi’s opera musically even as it pushed visually against the humanity of the work.

If the love between Rigoletto and Gilda is profoundly real, the rhapsodic hook-up between the girl and the dissembling Duke is heartfelt only on her side. Though he later soliloquizes about his “true” feelings for Gilda, he’s soon enough in the arms of a twenty-dollar prostitute chez Sparafucile. But in their vocally gleaming duet wherein the Duke-as-student urges his love for Gilda, Feola and Polenzani were, shall we say, separately credible.

In her ensuing aria “Caro nome,” the girl’s breathless embrace of the phony name he’s handed her, Feola brought down the house, completely stopped the show. This is the Italian soprano’s Lyric debut, and you can bet the farm she will be back. Soon, let us hope. She sent “Caro nome” aloft on gossamer wings with a vocal display at once precise and delicate, pliant and glistening. I half wondered whether we were actually going to witness an encore of the aria. 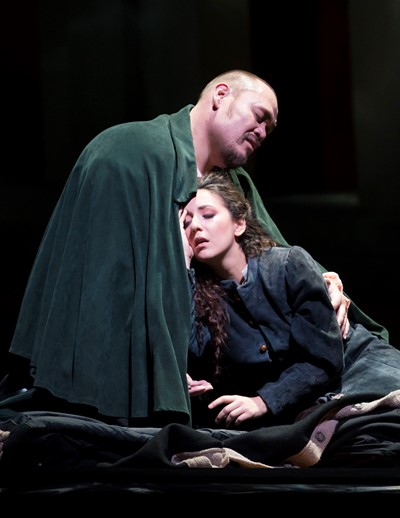 Polenzani likewise capitalized on an equally famous opportunity with “La donna è mobile,” the philandering Duke’s cheerful rumination on the fickleness of women. The tenor delivered that grand aria with laser exactness, a huge sound and esprit aplenty.

All that said, what raised this unattractive “Rigoletto” to high drama was the two later duets between the jester and his fallen daughter – first at the Duke’s palace, in the painful reunion between Gilda and Rigoletto after she has been kidnapped and handed over to the Duke for his pleasure, and then at the end when all is lost, Gilda’s life and her father’s last best hope. These were searing moments that exulted in both Kelsey’s long experience and Feola’s artful vulnerability.

Less successful was the key encounter between Rigoletto and Sparafucile, when the latter is simply working the streets to drum up business as assassin for hire. Though basso Alexander Tsymbalyuk cut a scary figure in the opera’s final act, back on Sparafucile’s home turf, in the street scene with the distracted jester he did not show the vocal darkness that’s effectively the killer’s calling card. The delicious diminuendo at the end of scene, as the withdrawing Sparafucile reminds Rigoletto of his name, was altogether inaudible from my quite good vantage point.

One young singer emerged from these shadowed environs, or perhaps I should say continued his emergence: As Marullo, a member of the Duke’s court who engineers Gilda’s abduction, baritone Takaoki Onishi, in his third year at the Lyric’s Ryan Opera Center, showed both the vocal maturity and authoritative stage presence that are soon going to carry him high in the opera world.

Did I mention shadows? The Duke’s court in Act 1 was only too well blanketed in darkness, whereas Gilda’s midnight abduction was carried out under excellent illumination. And the duped Rigoletto couldn’t discern his own front gate? Go figure.

The ever reliable Lyric Opera Orchestra and Chorus both distinguished themselves in a production that will linger in memory for its musical riches.