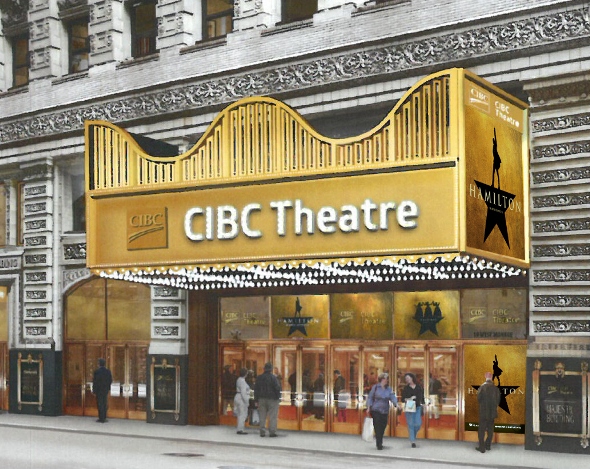 Broadway In Chicago has announced the renaming of The PrivateBank Theatre, at 18 W. Monroe, as the CIBC Theatre. This represents The PrivateBank name change to CIBC under a unified brand globally following their June acquisition.

Lou Raizin, President of Broadway In Chicago said, “We are happy that CIBC will continue to support Broadway In Chicago’s mission to attract the best shows like Hamilton. Their sponsorship of the CIBC Theatre represents a commitment to Chicago and its vibrant theatre community.”

“We are proud to show our commitment to a strong and vibrant Chicago with our continued sponsorship of Broadway In Chicago and the CIBC Theatre,” said Larry D. Richman, Senior Executive Vice-President and Group Head, CIBC U.S. Region and President and CEO, CIBC Bank USA. “We also are excited that, through this partnership, we are able to continue to provide arts education opportunities for students throughout Chicagoland.”

Tickets already distributed for Hamilton bearing the name of The PrivateBank Theatre will be valid for the newly named CIBC Theatre.

CIBC is a leading Canadian-based global financial institution with 11 million personal banking, business, public sector and institutional clients. Across Personal and Small Business Banking, Commercial Banking and Wealth Management, and Capital Markets businesses, CIBC offers a full range of advice, solutions and services through its leading digital banking network, and locations across Canada, in the United States and around the world.  Ongoing news releases and more information about CIBC can be found at www.cibc.com/ca/media-centre.

ABOUT BROADWAY IN CHICAGO

Broadway In Chicago was created in July 2000 and over the past 17 years has grown to be one of the largest commercial touring homes in the country.  A Nederlander Presentation, Broadway In Chicago lights up the Chicago Theatre District entertaining up to 1.7 million people annually in five theatres. Broadway In Chicago presents a full range of entertainment, including musicals and plays, on the stages of five of the finest theatres in Chicago’s Loop including the Cadillac Palace Theatre, CIBC Theatre, Oriental Theatre, and just off the Magnificent Mile, the Broadway Playhouse at Water Tower Place as well as presenting Broadway shows at The Auditorium Theatre of Roosevelt University.  For more information, visit www.BroadwayInChicago.com.