‘The Maids’ at American Players Theatre: Dressing up and getting down, sans laughter 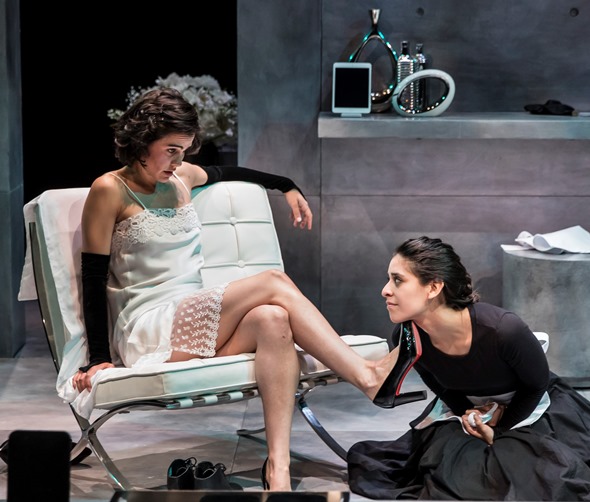 “The Maids” by Jean Genet, translated from the French by Bernard Frechtman, at American Players Theatre through Oct. 5. ★★★

SPRING GREEN, Wis. – Know thyself, cautioned Socrates. To thine own self be true, babbles Polonius in “Hamlet.” Define yourself and own who you are, demanded Jean-Paul Sartre, anyway in words to that effect.

In Jean Genet’s bleak existential drama “The Maids,” two young women, sisters and live-in house maids to the same mistress, push their misery and identity denial right into the face of Sartre’s first principle of personal authenticity. A noir study in delusional role-playing and its dark consequences, “The Maids” is on fascinating display at American Players Theatre. 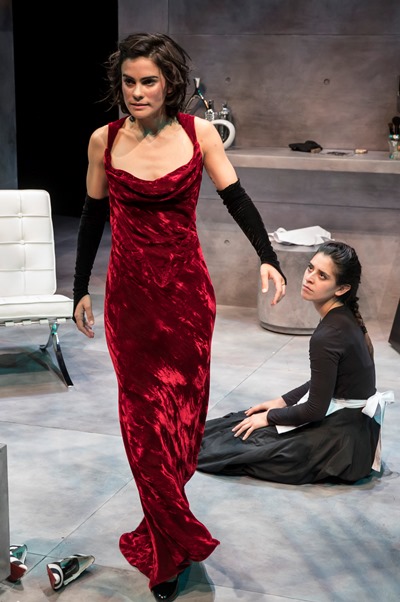 Genet (1910-86) belonged to the circle of French existential playwrights caught up in the despair of World War II, philosophical dramatists who insisted that, in a mad and desperate world, every soul must take moral responsibility for himself. Forget looking around for someone to blame; you are wholly accountable for what you make of yourself.

Sartre was the acknowledged guru and Genet one of his most devoted followers. But Genet was no mere sycophant. He wrote against the background of his own harsh life as an oft-convicted thief, a prostitute, a member of the French foreign legion expelled for debauchery. But Sartre came to admire Genet greatly and wrote a prodigious tome, “Saint Genet,” an exhaustive analysis of this most earthy of existentialists.

Indeed, in “The Maids” (1947) one senses a distinct echo of Sartre’s “No Exit” from just three years earlier – though whereas Sartre’s play mirrors the hopelessness, the literal entrapment, of the war at its awful apex, “The Maids” speaks of an abiding truth taken to heart: We are trapped in our skin, and no amount of pretense or moral equivocation can free us from who we are. 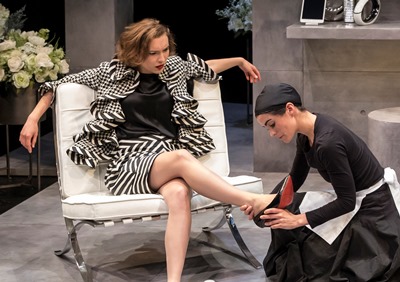 Claire (Melisa Pereyra) and her older sister Solange (Andrea San Miguel) live and work in the home of a wealthy young woman – perhaps no older than the maids – whom we know only as Madame (Rebecca Hurd).

The two maids feel oppressed by their mistress and dehumanized by their circumstances, and so they secretly act out their bitterness and their wish to rebel, to transcend, to seize control. San Miguel and Pereyra turn in performances of grinding power. The production’s mesmerizing tempo and long moments of suspense, adroitly managed by director Gigi Buffington, will leave you quite drained. In the intimacy of APT’s 200-seat Touchstone Theatre, the space between you and the stage collapses. And like these two bereft, obsessive souls, you cannot turn away.

The maids’ mistress casually revels in her superior station and seems to take pleasure in toying with their envy. But what Madame doesn’t know is that when she’s away, the sisters dress up in her fine dresses and jewelry. But there’s more to it than that.

They play an ominous game in which one puts on the finery – as well as Madame’s persona – to taunt and berate the other. It’s clear that the maids have replayed their fantasy many times, but they’ve never taken it to the endgame they both visualize: Madame’s death. This is the gray zone of their role-playing. Is the fantasy they play out in minute detail of behavior, even down to inflection, essentially rehearsal for something else? Is it a psychological conditioning to prepare them for a denouement much darker than their sado-masochistic repetitions? 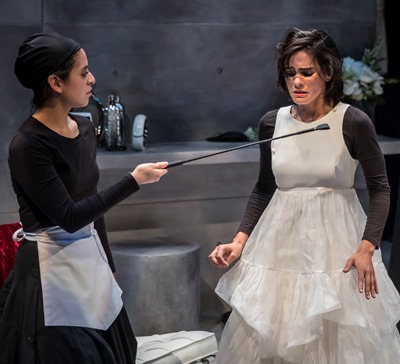 The maids find no mirth in their game. There’s to exhilarating spirit of adventure in their dress-up, no laughter. They are serious, one might say deadly serious, about getting it right – the dialogue, the attitude, the carefully drawn map of where all this is inexorably headed.

What’s unfolding before the viewer’s eyes is so grim that one begins to search instinctively for release. Early in my journalism career, I spent a good deal of time on a newsroom copy desk, where sometimes only gallows humor made it possible for me and my colleagues to do our work in the face of great tragedy.

Watching Genet’s overdetermined maids turn their self-pity into – what, existential comedy? — I thought, no, not comedy, but very dark farce. What came to mind was a more recent variant of “The Maids,” the Irish playwright Enda Walsh’s “The Walworth Farce,” in which brothers are immersed in a similarly grim and repetitive exercise from which they can never escape. Both plays channel the self-deluding circularity of “No Exit.” 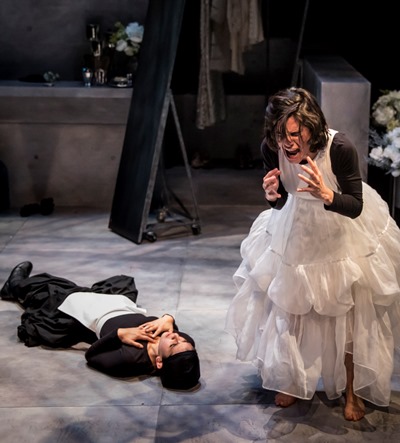 Genet does not lead his characters to light. They are who they are, and their end seems inevitable, if in the half-light of their fantasy there is an end at all.