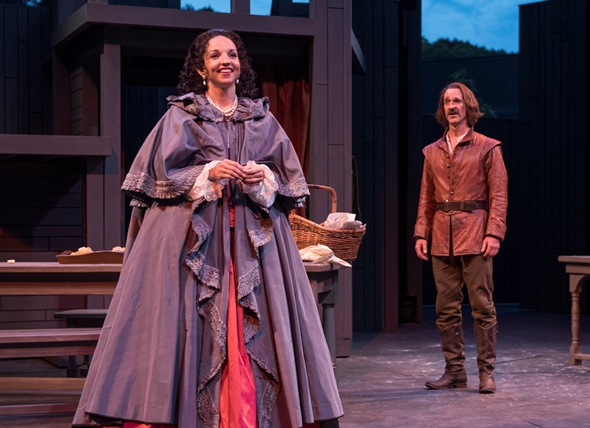 SPRING GREEN, Wis. – To say a plain thing plainly, the production of Edmond Rostand’s “Cyrano de Bergerac” on display this summer at American Players Theatre would be worth the three-and-a-half-hour drive from Chicago even if you didn’t stick around for any other show – which would be a mistake.

Or to go straight to the heart of a transcendent night under the stars in APT’s newly refurbished al fresco venue, the trek is repaid amply by James Ridge’s complex embodiment of Cyrano as lyric poet, matchless swordsman and, above all else, unrequited lover, a man whose many gifts stitched together cannot veil the defeating protuberance that is his formidable nose. 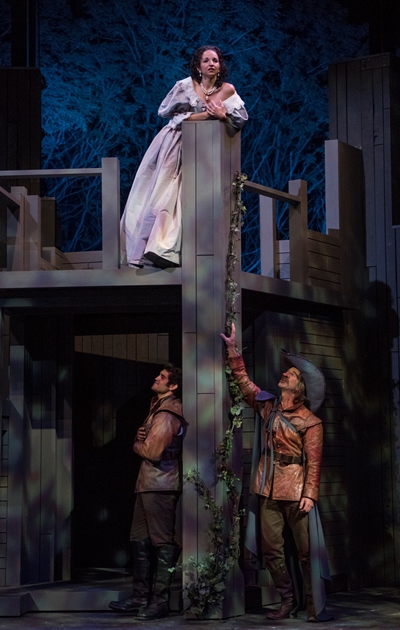 Ridge’s portrayal of Rostand’s sad but proud hero, who prides himself first and last on his panache, is at once earthy and ethereal. No doubt Ridge’s empathic Cyrano owes much to the naturalism of this adaptation by James DeVita, who also directs the show, which largely dispenses with the rhymed couplets of the original French text in favor of rhythmically sprung dialogue that moves forward with fluid grace on every hand. And still, it is Ridge’s image of profound humanity, his portrait of Cyrano’s unassailable pride and nobly borne heartbreak, that sweeps us along and remains fixed in memory.

Cyrano loves his distant cousin, the beautiful and intellectual Roxane (Laura Rook), who is surrounded by admirers of far finer (outward) aspect than he of the overdeveloped schnoz. When Roxane calls the hopeful Cyrano aside to confess her boundless love for a handsome young man newly assigned to his troop of soldiers, he is crushed – but accepts her charge to look after the lad Christian (Danny Martinez). 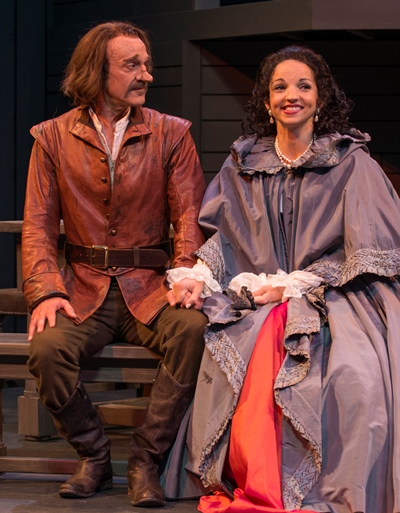 The bright side for Cyrano is that Christian needs help wooing Roxane. Though a brash, bold fellow, Christian lacks all sophistication. Cyrano becomes the young man’s ghost poet, penning eloquent testaments of love to the thrilled Roxane. In a balcony scene, shadowed by night, Cyrano feeds lines to the doltish Christian as Roxane listens from above. When that proves awkward, Cyrano takes over entirely and, shielding his face, unleashes the sea of adoration long pent up in his heart. Ridge’s rhapsodic delivery of that unsigned confession is one of the production’s two peak moments. Soon after, the enchanted Roxane weds her heart’s delight, or rather the strapping figure she thinks she loves.

Ridge’s other masterstroke comes with Cyrano’s death, some 15 years later – long after Christian has died in battle despite Cyrano’s devoted efforts to save him. Shattered, Roxane has withdrawn to a convent where Cyrano has visited her faithfully once a week, never disclosing the truth about whose great mind had in fact touched her soul. Ever outspoken and defiant, Cyrano has acquired many enemies and one has just ambushed him; he arrives at the convent concealing a severe head injury. 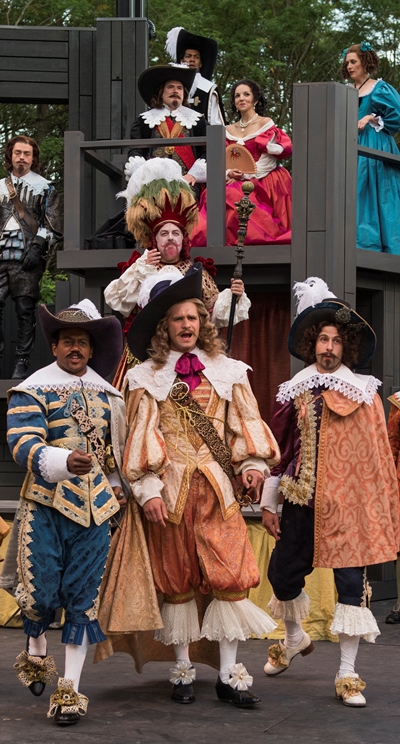 With Roxane, he re-reads her last letter from “Christian,” and as she listens to him – and sees that he is not reading at all but rather reciting – she recognizes the expressive voice and understands at last what she has mistaken for so long. But Cyrano’s hour has come, and he dies in Roxane’s arms, comforted by her and clinging still to the one thing he has never relinquished: “my panache.”

“Cyrano” is very much that proud man’s play. It is a huge role on the prodigious order of Hamlet. Rarely off stage, Ridge carries the show with the hero’s assured and easy bearing. Yet he is also surrounded by finely drawn characters, starting with Rook’s lovestruck Roxane, who becomes quite impatient when Martinez’s impetuous Christian tries to write – and speak – his own script but can’t seem to get beyond “I love you, I love you, I love you.” John Taylor Phillips cuts a fine villain as the vengeful aristocrat DeGuiche, who lusts after Roxane and makes everyone pay when she turns him down for Christian.

Also in a prominent role was American Players’ completely rebuilt stage, the centerpiece of an $8 million makeover of the company’s hilltop outdoor theater. DeVita made imaginative use of the renovated space and its several levels. The sets designed by Nathan Stuber are practical and unencumbering, and Matthew J. LeFebvre‘s splendorous attire for the wealthy noblemen — topped by grandly plumed hats — is the very definition of dandy.