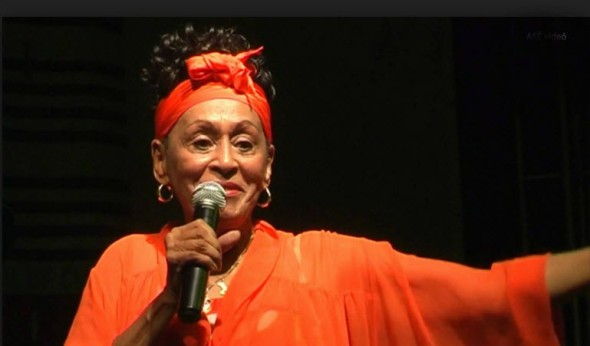 The 2016/17 SCP Jazz series opens in October with legendary Cuban vocalist Omara Portuondo, best known for her contributions as a member of the famous Buena Vista Social Club ensemble, who celebrates her 85th Birthday this year. The series continues in November with the Symphony Center debut of New Orleans jazz luminary Dr. John, who honors the unmistakable New Orleans style of his own jazz hero, trumpeter Louis Armstrong in his “Spirit of Satch” project that features trumpeter Nicholas Payton. 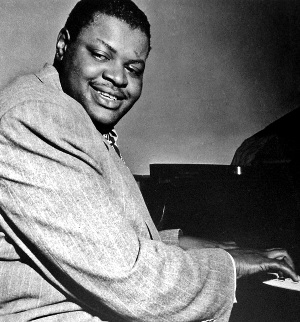 The 2016/17 series also includes several programs that recognize the tremendous contributions of some of jazz’s major figures. These programs are anchored by an April presentation of Oscar, With Love, a unique concert event inspired by the recent recording project of the same name that was curated by Oscar Peterson’s widow Kelly Peterson. The SCP Jazz series presentation of Oscar, With Love brings together an all-star roster of jazz pianists performing standards and Peterson’s own compositions. Featured pianists include Kenny Barron, Bill Charlap, Benny Green and Renee Rosnes, as well as Chicago’s own Ramsey Lewis.

The Jazz 100 project arrives in March 2017, with music director/pianist Danilo Pérez at the helm, and heralds the legacy of jazz masters Dizzy Gillespie, Ella Fitzgerald, Mongo Santamaria and Thelonious Monk, all of whom were born in 1917. The exceptional musicians of the SFJAZZ collective embrace the music of trumpeter Miles Davis, jazz’s “Prince of Darkness,” in a program of new arrangements and original compositions in May. The concert also includes MacArthur Fellow and violinist Regina Carter with her program called Simply Ella, inspired by one of Carter’s favorite artists, the great Ella Fitzgerald. 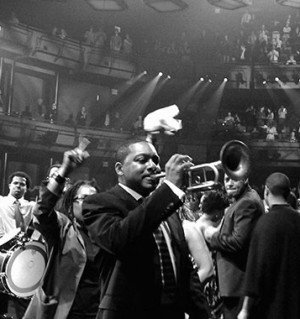 A highlight of every SCP Jazz season is the return of legendary trumpeter and bandleader Wynton Marsalis and his Jazz at Lincoln Center Orchestra (JLCO). This year Marsalis and JLCO arrive in March for a multi-day residency that includes a March 1 SCP Jazz series concert, a day of educational activities in the community on March 2 and a special concert on March 3 that features the combined forces of JLCO and the Chicago Symphony Orchestra in a program that includes popular classical works in their original versions and new jazz arrangements of those works created by members of JLCO, and an excerpt from Marsalis’ own Swing Symphony.

Program details for each of the 10 concerts in the 2016/17 SCP Jazz series concerts and related special concerts follow.

Celebrated Cuban vocalist Omara Portuondo, touring in celebration of her 85th birthday,  launches the 2016/17 SCP jazz series Friday, October 21, at 8 p.m. with a program that reflects back on Portuondo’s career of nearly 70 years including her days as a member of the Buena Vista Social Club.  Backed by an all-star ensemble for an evening of music that highlights Portuondo’s soulful blend of Latin music and American jazz, she is joined by special guest artists including Cuban-born pianist Roberto Fonseca, clarinetist Anat Cohen, and the innovative jazz violinist Regina Carter.

On Friday, November 18, at 8 p.m. Six-time Grammy® Award-winning keyboardist and Rock and Roll Hall of Fame inductee Dr. John makes his Symphony Center debut for a concert entitled The Spirit of Satch. Based on Dr. John’s critically acclaimed 2014 album Ske-Dat-De-Dat…The Spirit of Satch, the concert highlights important selections from the five-decade career of legendary New Orleans trumpeter and vocalist Louis “Satchmo” Armstrong. Joining Dr. John and a specially assembled band for this traversal of the jazz icon’s catalog is bold trumpeter Nicholas Payton.

The Jazz at Lincoln Center Orchestra (JLCO) led by its dynamic bandleader and trumpeter Wynton Marsalis returns to Symphony Center for its residency beginning with their SCP Jazz series concert on Wednesday, March 1, at 8 p.m.Arguably one of the today’s greatest jazz bands, the Jazz at Lincoln Center Orchestra offers an electrifying evening of original tunes and classic jazz selections featuring some of jazz’s finest solo and ensemble players. After a day of educational activities in the Chicago area on March 2, JLCO and Marsalis join forces with the Chicago Symphony Orchestra for a special concert led by conductor Edwin Outwater on Friday, March 3, at 8 p.m. The program features an excerpt from Marsalis’ Swing Symphony and core classical repertoire performed by the CSO paired with new jazz arrangements of these works created by members of JLCO. The special concert marks the first collaboration between JLCO and the CSO since the performance of Marsalis’ landmark work All Rise on subscription concerts in 2007.

On Friday, March 17, at 8 p.m. a stellar roster of jazz musicians under the musical direction of Danilo Pérez converges on Symphony Center for the program Jazz 100: The Music of Dizzy, Ella, Mongo and Monk. The concert is a celebration of the centennial birthdays of jazz legends Dizzy Gillespie, Ella Fitzgerald, Mongo Santamaria and Thelonious Monk. Musicians Chris Potter (tenor saxophone), Avishai Cohen (trumpet), Wycliffe Gordon (trombone), and vocalist Lizz Wright, along with Ben Street (bass), Adam Cruz (drums) and Roman Diaz (percussion) revisit the extraordinary artistry of these jazz luminaries in a program led by music director and former Gillespie pianist Danilo Pérez.

Taking its cue from Oscar, With Love, the critically-acclaimed independent 2015 release of the same name, the SCP Jazz series welcomes an all-star lineup of pianists including Kenny Barron, Bill Charlap, Benny Green, Ramsey Lewis and Renee Rosnes for an evening of music honoring the late jazz pianist Oscar Peterson on Friday, April 7, at 8 p.m. All of the featured pianists in this concert participated in the landmark recording project, organized and produced by Peterson’s widow Kelly Peterson, and deliver their interpretations of original Oscar Peterson compositions.  For this concert, the program also includes selected jazz standards often performed by Peterson in his decades-long career.

On Friday, April 21, at 8 p.m. NEA Jazz Master and celebrated saxophonist Charles Lloyd comes to Symphony Center, joined by his new band The Marvels, featuring Bill Frisell (guitar), Greg Leisz (pedal steel guitar), and his long-time band members Reuben Rogers (bass), and Eric Harland (drums). With the release of their 2016 album I Long To See You, the group established a sound that is both melody-forward and refined. The new project revives some of Lloyd’s own compositions and brings a fresh take to folk songs and spirituals. Opening the concert is theChicago Tribune’s 2015 Chicagoan of the Year in Jazz, cellist Tomeka Reid, along with her quartet in an SCP Jazz series debut.

The SFJAZZ Collective comes to Symphony Center on Friday, May 5, at 8 p.m. with a set inspired by the music of one of jazz’s all-time greats, Miles Davis.  Fresh arrangements of popular Davis works are paired with new commissions of original compositions which highlight the legacy of this one-of-a kind figure in jazz. The Music of Miles program features SFJAZZ Collective musicians Miguel Zenón (alto saxophone), David Sánchez (tenor saxophone), Sean Jones (trumpet), Robin Eubanks (trombone), Warren Wolf (vibraphone), Edward Simon (piano), Matt Penman (bass) and Obed Calvaire (drums). The concert opens with dynamic jazz violinist Regina Carter as she marks the centennial of one of her greatest musical inspirations and iconic jazz vocalist, Ella Fitzgerald with a program entitled Simply Ella. Carter’s deep connection to Ella Fitzgerald stretches back to her youth when she first became entranced by vocal stylings of this incomparable artist and it continues to influence Carter’s daring style of music-making.

Multiple Grammy®-winning trumpeter and composer Terence Blanchard comes to the SCP Jazz series with his new quintet, The E-Collective, on Friday, May 19, at 8 p.m. The ensemble, featuring Blanchard on trumpet, on drums, assembled for their first recording Breathless in 2015, charting new territories with songs that range from funk and R&B to Miles Davis-inspired fusion and dreamy, ambient tunes. Opening the evening is the Steve Wilson/Lewis Nash Duo, two of the most sought-after musicians in jazz, with a set that features selections ranging from Ellington to Monk to Ornette Coleman-style free jazz. The two jazz veterans formed their intriguing combination of alto saxophone (Wilson) and drums (Nash) in 2001, and recorded the album Duologue in 2014.

MacArthur Fellow Jason Moran and his trio The Bandwagon return to Symphony Center with a new project called New Fables: Muldrow, Moran and Mingus featuring special guest vocalist Georgia Anne Muldrow, also known as Jyoti, on Friday, June 2, at 8 p.m. Moran and Muldrow synchronize their singular creative approaches to explore the compositions and blues influences of legendary jazz musician Charles Mingus, including his tunes “Blues & Roots,” “Better Get It In Yo’ Soul” and “Fables of Faubus.” Georgia Anne Muldrow makes her Symphony Center debut in this concert.

Discounted student tickets for select concerts can be purchased, subject to availability, online in advance or at the box office on the day of the concert. For group rates, please call 312-294-3040.

Artists, programs and prices are subject to change.

The Symphony Center Presents Jazz series is sponsored by Exelon.