To sub for ailing Muti, spry Russian Rozhdestvensky, 84, agrees to stick around 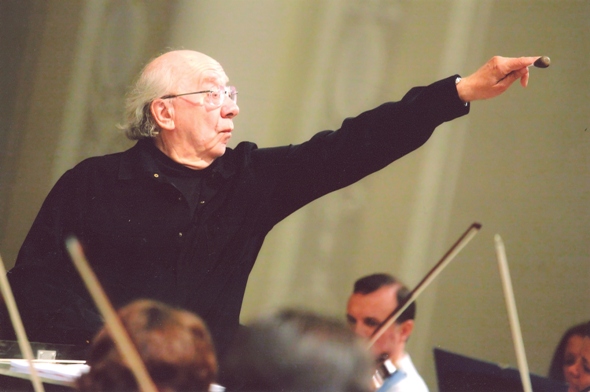 This Just In: The following is from a news release by an arts organization.

CHICAGO — Distinguished Russian conductor Gennady Rozhdestvensky, who is currently in Chicago to lead the Chicago Symphony Orchestra in performances of Shostakovich’s Symphony No. 1 & 15 this weekend February 5 & 6, has graciously agreed to remain with the Orchestra for an additional set of concerts on February 11, 12, 13 & 16.  Rozhdestvensky steps in for CSO Music Director Riccardo Muti, who had to withdraw from his February concerts in Chicago due to recovery from a hip operation.

The program remains the same and features works for strings by Ligeti, Pärt and Tchaikovsky, as well as Mozart’s Clarinet Concerto featuring CSO Principal Clarinet Stephen Williamson as soloist.

Tickets for these performances are available at cso.org, via phone at 312-294-3000, or in person at the Symphony Center box office, 220 S. Michigan Avenue, Chicago.

Gennady Rozhdestvensky, one of today’s greatest conductors, was born in Moscow in 1931. He studied the piano with Lev Oborin and conducting with his father, Nikolaï Anosov, at the Moscow Conservatoire. At the unusually early age of 20, still a student at the Conservatoire, he was engaged at the Bolshoi Theatre where he made his début conducting Tchaikovsky’s ballet The Sleeping Beauty. His was to be a long term relationship with the Bolshoi: he became their principal conductor between 1964 and 1970, and in 2000 was appointed their General Music Director.

At the Bolshoi, he has conducted more than thirty operas and ballets, and gave the world premiere of Khatchaturian’s ballet Spartacusand the Russian premiere of Britten’s A Midsummer Night’s Dream. From 1956 on, he toured regularly with the Bolshoi ballet in many countries in Europe, Asia and America.

For many years, he also headed the Moscow Radio Orchestra and became the first Soviet conductor, a novelty at the time, ever to be appointed principal conductor of various foreign orchestras: the BBC Symphony Orchestra in London, the Vienna Symphony Orchestra, and the Stockholm Royal Philharmonic Orchestra.

In 2011, he celebrated his 80th birthday together with the 60th anniversary of his conducting debut with a special evening at the Bolshoi Theatre.