‘An Iliad’ at American Players Theatre: Of rage, ruin and the cherished legacy of endless wars 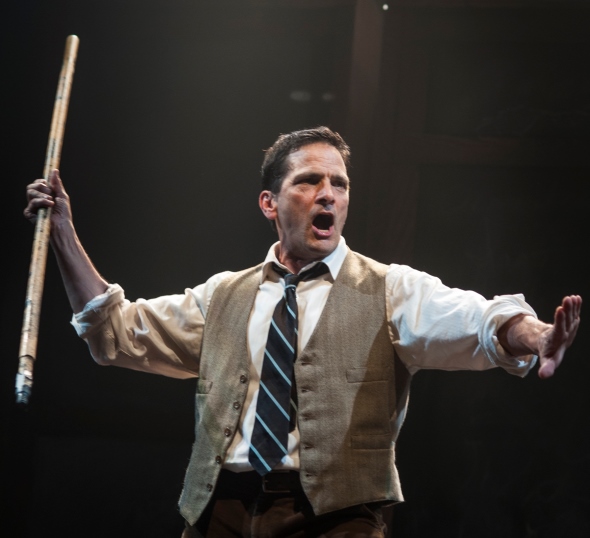 Review: “An Iliad” by Lisa Peterson and Denis O’Hare, based on Homer in Robert Fagle’s translation, through Oct. 18. ★★★★★

SPRING GREEN, Wis. – Rage. It’s all about the rage – that and the hubris and the overweening pride, not to mention the sheer mad blood-lust. But it is rage, Achilles’ rage, that launches Homer’s account of the Greek’s siege of Troy, ancient Ilium.

And it is rage beyond expression or reason or appeasement that rips through the timeless modernity of “An Iliad,” the dramatic distillation of Homer’s epic by Lisa Peterson and Denis O’Hare that now echoes against the near walls of an intimate space at American Players Theatre. This fraught opus of glory and gore bristles in the one voice but many personas of Jim DeVita, playing the Poet who frames the perpetual folly of war in the single, appalling, ever repeating travesty that was Troy. 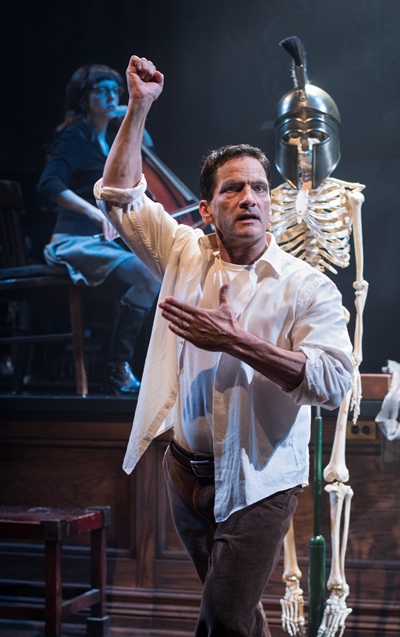 Though indeed it is a one-man show (allowing for the wordless presence of the Muse, personified here by the able cellist Alicia Storin), there is also a director, John Langs, and it’s impossible to know which elements of a marvelous conception should be attributed to Langs and which to DeVita. Whatever the proportions of credit, this production of “An Iliad” is an intellectual burner and a visceral, physical thriller.

DeVita’s Poet presents himself as a skilled college lecturer, an expert in his subject who can even declaim in ancient Greek. But he also understands that he needs to be a good salesman – in other words, an adroit performer who can draw his audience (or class) into the immediacy of stuff that’s very old but holds imperishable lessons, relevance, currency. And thus the actor sweeps in wearing a tweedy jacket and spectacles, brimming over with energy and urgency. I once had a Shakespeare professor who in histrionic flourishes would clamber over the top of his desk. This is DeVita the exuberant prof, a wily story-teller who has us quickly in his thrall.

Besides a lectern, the classroom set designed by Brian Sidney Bembridge provides DeVita’s Poet with ample space for intense, if stylized, combat and a life-size skeleton that he crowns in a battle helmet. To bring this distant, long-ago war home, the Poet likens the vast embrace of Greek conscription — which would have pulled boys who were barely men from little towns you never heard of — to an American invasion force drawn from places as far flung as Memphis,  Madison and Lawrence, Kan. You get the idea. 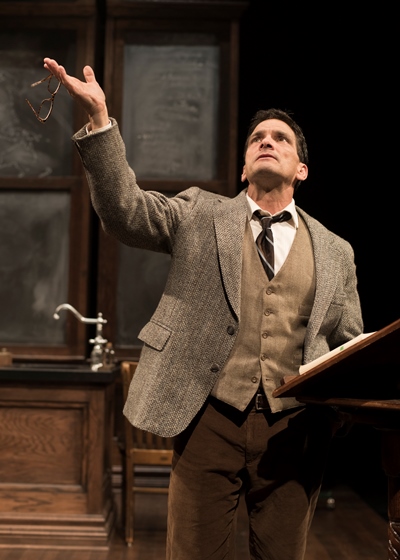 At the center is god-like, nearly insuperable Achilles. Raging Achilles. And what’s the all-time greatest of warriors so upset about? His commander Agamemnon, head of Greek forces now in the tenth year of their assault on Troy, has demanded that Achilles hand over to him the Trojan slave-girl given to Achilles as a prize for his valor. And this because Agamemnon has been prevailed upon by his officers to surrender his own Trojan concubine to placate the angry gods.

No way will Agamemnon be the only Greek chieftain without a prize. Let Achilles pay homage to him and pay up. Given no choice, brilliant Achilles (as Homer likes to call him) says, in essence: Fine, but now let’s see how you all fare against the Trojans and their great hero Hector without me – because I quit.  And he does. And thereby hangs the rest of this tale of slaughter and retribution and fruitless appeals to Achilles to reconsider, to help turn the tide of fighting that now goes against the Greeks.

All this DeVita plays out, jacket off and sleeves rolled up, in the guises of importuned Agamemnon, fierce Achilles, dauntless Hector and, not least, the valiant and noble Patroklos, Achilles’ closest friend and tent-mate. Patroklos, with Achilles’ consent, puts on the great warrior’s armor and leads the Greeks to new success – until some of the ill-fitting metal falls away and he is slain by Hector. 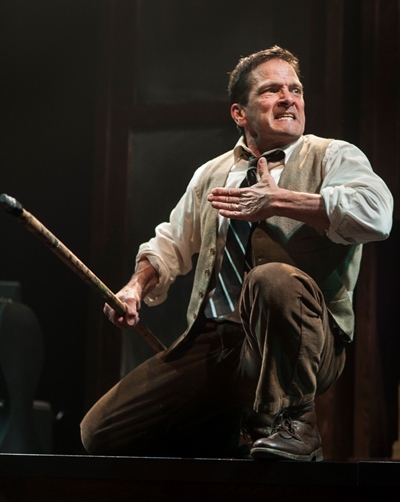 What DeVita now enacts, wholly embodies, is the insanity of war taken way off the charts. Now we see what an enraged Achilles really looks like: The sly college prof has been left behind; it is the Poet howling the pain of a man who has allowed his dearest friend to die at the hands of his primal foe. DeVita shows us anger at an elemental level. To be brief, Achilles finds Hector and kills him. But that’s not enough. He defiles Hector’s corpse by tying it to his own chariot and dragging it around and around the ramparts of Troy.

It was awful to witness, says the Poet. Much like that time on “a terrible hot day during the conquest of Sumer – I mean the conquest of Sargon – uh, the Persian War – no….” And off he goes on a litany of wars, more than 150 of them in a breathless incantation from Troy to the many Crusades to the Hundred Years’ War to the French and Indian Wars to the American Revolution, French Revolution, First World War, Second World War, Sioux Wars, Russian Revolution, Japanese Invasion of Manchuria, Korean War, Vietnam, Six-Day War, Darfur, Iraq, Afghanistan, and on and on and on. It’s so rarely quiet on the western front.

The grandeur of DeVita’s performance lies in its conviction and its breadth – in its irony, pathos, clarity and grit. Thus his Poet summons the horror, futility and waste not only of those many wars he recites, but also of the hundred fifty more he knows will come.