As James Conlon epoch winds down at Ravinia, familiar fanfares of Mahler and rumble of trains 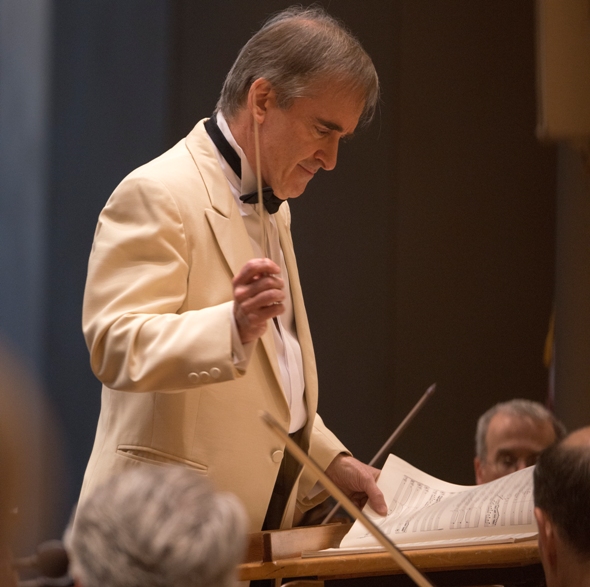 For eleven years, James Conlon has had an unexpected enemy: commuter trains.

Since becoming music director of the Ravinia Festival in 2005, he seems to have learned that a roaring Metra train, whose tracks pass near the Ravinia pavilion, can compete even with the great Chicago Symphony Orchestra. 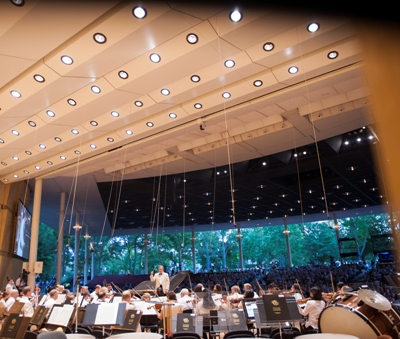 So on July 22, Conlon, now in his last season as leader of the orchestra’s summer residency, simply waited patiently at the podium with an amused smirk while a train clattered into a station and eventually rumbled past between the second and third movements of Mahler’s First Symphony.

Conlon first conducted the CSO as a young guest at Ravinia in 1977; 38 years later, he re-created that first program. The two works performed also represent some of Conlon’s passions while at Ravinia.

Over his tenure as music director, Conlon conducted a complete cycle of Mozart’s piano concertos, heralded by his ’77 debut with John Browning as soloist in No. 23 in A, K. 488. This year, Garrick Ohlsson took the solo role, his relaxed, confident style befitting Mozart’s lustrous moods and delightful melodies. 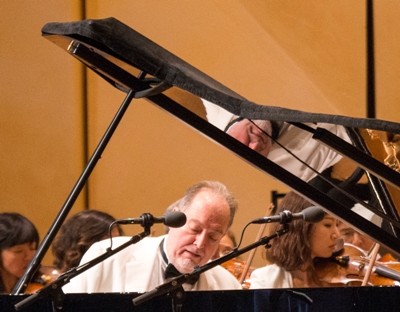 Ohlsson’s assured playing benefitted the desperate Adagio – there was no excessive wallowing in pathos – but slightly detracted from the easy pleasure of the Allegro assai by driving through some witty passages. But Conlon and Ohlsson are nuanced listeners (or at least as nuanced as one can be in an amplified, outdoor venue), so that there were wonderful moments in the Allegro during which the piano faded into the orchestra, creating a single finely woven texture.

One of Conlon’s more epic undertakings at Ravinia was a complete cycle of Mahler symphonies, including “Das Lied von der Erde,” “Das klagende Lied” and a completed version of the Adagio from the unfinished Tenth Symphony. The performance of the First Symphony thus both hearkened back to his debut and pointed toward a major achievement, one that he named as a high point of his Ravinia tenure.

The magisterial, exposed opening – the cosmos unfolding before you – is nigh-impossible to pull off perfectly, and it was slightly uncertain on this occasion (the extraneous noise of the outdoors didn’t help). But the bucolic scene that follows sparked to life in Conlon’s hands, his willingness to allow some coarseness in the brass heightening the rustic, natural feel of the music. 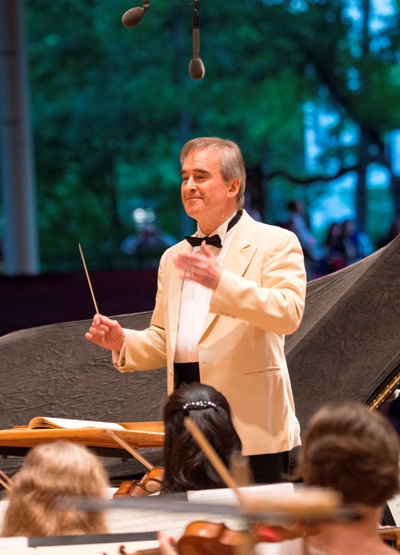 Most of the symphony lies closer to that rusticity than the majesty of the opening, and Conlon clearly relished the earthiness of Mahler’s themes, endowing the Viennese waltzes, Austrian beer hall songs, and sultry klezmer tunes with the life they deserve. Much of the vitality came from the CSO’s marvelous strings, with their powerful massed sound and energy. Principal bass Alexander Hanna and principal bassoonist Keith Buncke, both quite young, contributed sensitive, beautiful solos in the third movement, proving that they are more than worthy of this esteemed orchestra.

Equally worthy and honorable is Conlon as he completes his valedictory season and says goodbye to Ravinia and the CSO – and to those pesky trains.

[Conlon’s final Chicago Symphony concerts at Ravinia include Zemlinsky’s tone poem “Die Seejungfrau” (The Mermaid) and Brahms’ First Piano Concerto with Jorge Federico Osorio on July 29; an all-Tchaikovsky program featuring Maxim Vengerov in the Violin Concerto, selections from the ballet “Swan Lake” and the “1812” Overture with live cannons on Aug. 1; and Wagner’s opera “The Flying Dutchman,” with Greer Grimsley as the Dutchman and Amber Wagner as Senta, on Aug. 15.] 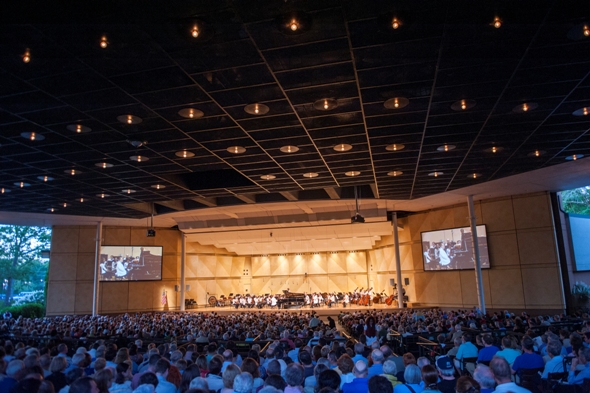