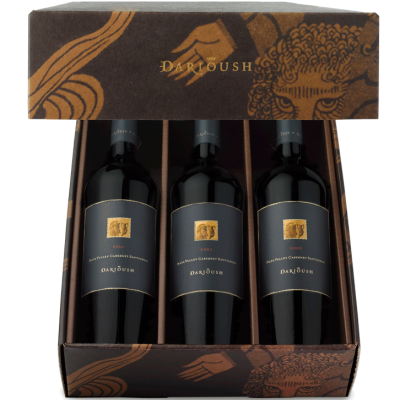 If the name Darioush isn’t on your wine radar, it’s probably because the bottled splendors from this Napa producer are available mainly at selected restaurants around the U.S. and at the winery located on the famous Silverado Trail.

Here’s a case of a very good thing coming in very small quantities. Darioush Khaledi, a native of Iran who first learned wine-making from his father, founded his Napa venture in 1997 with the goal of creating great reds on the Bordeaux model. As the latest blended Cabernet Sauvignon from Darioush attests, he has succeeded impressively.

I tasted an array of Darioush’s red wines at a recent presentation by the company’s peripatetic ambassador, Dale Carrillo. What struck me about one rewarding pour after another was not just the luscious, yet well-focused flavor palette of each wine, but also the complexity and acidic structure that distinguished Cabernet Sauvignon blends as well as a Merlot and a Cabernet Franc.

Setting aside the flagship Darius II, a profound Cabernet Sauvignon made in minuscule amounts, the pride of Darioush’s reds it the Signature line. The Cabernet Sauvignon 2012 ($95) is fashioned on the Bordeaux template, meaning a blend of classic accents of Merlot, Cabernet Franc, Malbec and Petit Verdot.

I suspect the Darioush Signature 2012 would trip up many an experienced Bordeaux lover with its restrained, layered presentation of dark fruit flavors and elegant acid frame. Ripe tannins allow the wine to be enjoyed now, but I have no doubt the Signature 2012 will evolve – in the best sense of aging – for a good many years. It’s an imposing but graceful wine, with generous body and a delectably long finish.

The lovely Darioush Signature Merlot 2012 ($50) reminded me of the craziness that still occasionally echoes from the film “Sideways” and its protagonist’s manic aversion to Merlot. It’s funny in the film, but ridiculous as a principle. One has only to think of the great Bordeaux wines of St. Emilion and Pomerol in Bordeaux, virtually all of them Merlot-based. The Darioush Signature 2012 offers a sophisticated expression of Merlot at its most noble and alluring, a glassful of ripe red berries and spices, along with a hint of the chocolate at the heart of Bordeaux’s Right Bank wines.

Not least was I seduced by Darioush’s Signature Cabernet Franc 2012 ($65), a grape that I suspect dwells on the fringe for many wine enthusiasts. Though often cast in a supporting role in Bordeaux, Cabernet Franc plays one starring part: It is typically the sole grape used by Château Cheval Blanc, one of the greatest wines in St. Emilion and indeed of Bordeaux altogether. One sip of the Darioush Signature 2012 and that connection sprang to mind. This is a dark, grand wine, plush and yet convincingly integrated. As I kept rotating back through these three reds, the Signature Cabernet Franc 2012 held its own in a lofty triumvirate.