Tour is a tour is a tour? Not for CSO and Muti, bettering Paris-Vienna best at Carnegie Hall

NEW YORK – Perhaps it’s simply a matter of time zones and surroundings, but the Chicago Symphony Orchestra, playing the same music it had performed in its recent visit to Paris and Vienna, delivered a knockout performance at Carnegie Hall on Jan. 30 that outshone its best in those European capitals.

With music director Riccardo Muti again on the podium as he had been in Europe, the CSO absolutely let the dogs out to a virtually sold-out Carnegie Hall audience. If the concert began well with an assured, supple and colorfully evocative turn through Mendelssohn’s overture “Becalmed Sea and Prosperous Voyage,” it only got better from there. 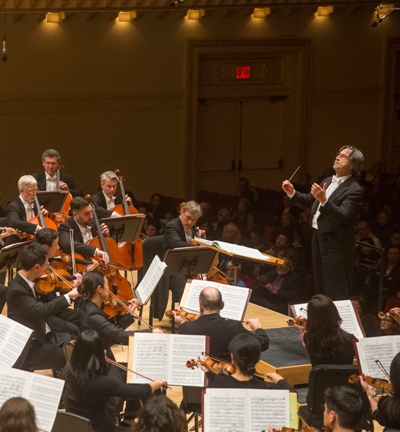 At the beginning of the current season, as Muti and company warmed up the repertoire it would take to Europe and then New York, they delivered an account of Debussy’s “La mer” that eclipsed, in its combination of shimmer and elegance and power, any other performance I could summon in memory. Yet when the CSO revisited the work in Paris – of all places! – and again in Vienna, the magic was gone, replaced by a sort of workman-like competence and efficiency.

But here, in the familiar environs and friendly acoustics of Carnegie Hall, and without the cumulative drain of a long trek across Europe, the Chicago Symphony recaptured the focus, the poise and all the ethereal qualities that had made “La mer” such a singular experience months ago at Orchestra Hall.

In their seasons together, Muti and the CSO have seen a string of successes at Carnegie Hall, this musical mecca where even the greatest orchestras come to reaffirm their eminence. With “La mer,” the Chicagoans bannered instantly and unequivocally their place among the world’s elite. It’s a rare ensemble that can invoke the sparkling spray, the towering waves, the sheer natural wonder of the sea as it is mirrored, Monet-like, through Debussy’s palette of strings, woodwinds, brasses and percussion. But here it was, wind and foam, thrilling to behold. 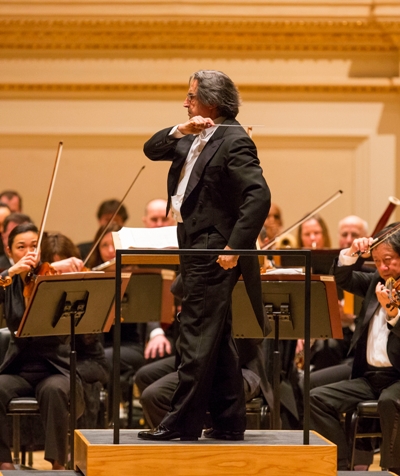 And still to come was a still grander display, the epic late-Romantic tapestry that is Alexander Scriabin’s Symphony No. 3 in C minor (“The Divine Poem”). In Vienna, Muti and the CSO had given a solid, indeed emotionally charged performance of Scriabin’s mystical, nearly unbroken 50-minute sweep of music. But again, the Carnegie Hall performance was better – more comfortable, more fluent, more nuanced.

Like Mahler, his senior by 12 years, Scriabin construed the symphony as a repository of all worldly experience, except that Scriabin extended the metaphor to the realms of spirituality and cosmos. It might be said, with only a touch of glibness, that Scriabin stands at the intersection of Mahler and Bruckner, where the tumult of the former meets the transcendence of the latter. That was very much the imposing impression of the CSO’s Carnegie Hall performance of “The Divine Poem.”

Written for vast orchestral forces in a post-Wagnerian tonal language not unlike that of Mahler, Scriabin’s Third Symphony (1902-04) proceeds from a ruminative prelude through three movements separated by only minimal pauses and labeled “Struggles,” “Pleasures” and “Divine Play.” For an orchestra with the natural resources of the Chicago Symphony, this is music heaven-sent. And Muti, who has advocated for Scriabin throughout his career, seems to resonate to the music at a depth familiar in the more numerous champions of Mahler.

The CSO served up a gorgeous performance, with voluptuous string playing complemented by radiant brasses and delicately sculpted woodwind effects. And that done, Muti opted to let Scriabin echo into the night: No encore, not Verdi’s obstreperous “Nabucco” overture that topped off every concert in Paris and Vienna. The maestro simply waved goodnight to a standing, whooping throng that could look forward to plenty more from the CSO in follow-up concerts Jan. 31 with pianist Yefim Bronfman and Feb. 1 with the Chicago Symphony Chorus in a Carnegie Hall finale of Prokofiev’s cantata “Alexander Nevsky.”